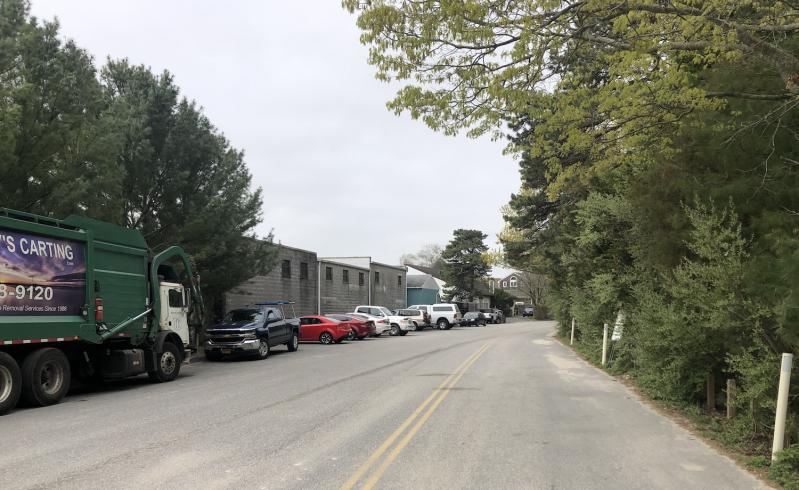 One goal as the recommendations in the Wainscott hamlet study are implemented is to create a greener, more pedestrian and cyclist-friendly commercial district that concentrates shared parking behind the businesses that line the hamlet's commercial core on Montauk Highway.
Carissa Katz
By Christopher Walsh

A group working on implementation of the Wainscott hamlet study took a close look at the possibility of burying the power lines on Montauk Highway when it met last week.

The hamlet study was incorporated into the town's comprehensive plan in 2019. With consultants to the town at the helm, the group is aiming to develop priorities that would create a greener, more pedestrian and cyclist-friendly commercial district that concentrates shared parking behind the businesses that line the hamlet's commercial core on Montauk Highway.

In a poll conducted during the virtual meeting, 67 percent of respondents favored burying the power lines as part of a streetscape plan. Another 22 percent favored burial only if property owners were not responsible for its cost. Eleven percent said that it was not worth the cost regardless of who is responsible for it.

Ray DiBiase of L.K. McLean Associates told the group that PSEG's preliminary cost estimate to bury the power lines between Wainscott Park and Old Montauk Highway is around $1.3 million. That figure would not include the cost to private property owners to bury the connecting power line to their building, which could be "considerable," he said.

In response to a question as to who would pay for the power lines' burial, Lisa Liquori of Fine Arts and Sciences, another consultant, recommended that the town pay for it. She referred to the host community agreement negotiated between the town and the developers of the South Fork Wind farm under which the developers will pay the town and town trustees around $29 million over the wind farm's expected lifetime. The town board has discussed allocating its share of the money toward improvements in Wainscott.

Mr. DiBiase said that if the utility poles were removed, "you'd want to put up streetlighting," which would not be included in the $1.3 million estimate, but some members of the working group disagreed. Unless and until the hamlet has a downtown that draws nighttime visitors, "we don't need it," said Pat Trunzo, who owns property in the commercial district.

Peter Flinker, of the Dodson and Flinker landscape architecture and planning consultancy, said that he, Mr. DiBiasi, and Ms. Liquori will prepare recommendations for the town board, which may include burial of the power lines.

The meeting also saw debate over zoning, specifically how to implement changes including landscaping, the addition of continuous sidewalks, decorative lighting, benches, and signs, and managing such changes to "build more of what you want over time and less of what you don't want," Mr. Flinker said. One way would be through establishment of a village overlay district. That, Mr. Flinker said, would "incorporate pedestrian-friendly village design" but allow some flexibility, and thus uncertainty, as to the outcome.

Another method would be a form-based code, which would establish a "master plan" with specific standards for architecture, landscaping, streetscape, parking, and pedestrian spaces. Form-based code is intended to foster predictable results by using physical form, rather than separation of uses, as its organizing principle.

"The idea would be to calibrate the system for what's appropriate in Wainscott," Mr. Flinker said of a form-based code. An advantage of that approach, he said, "is that you don't have to spend six months going back and forth with the planning board, asking 'Do you like this plan? This plan?' because everybody knows what's desired -- and what's required, in some cases."

Half of respondents to a poll taken during the meeting favored a village overlay district, 30 percent favored a form-based code, and 20 percent voted for retention of the existing zoning and development pattern.

The existing zoning code does not allow the density that would produce a walkable core for the hamlet, Mr. Flinker said. "So the question is, how can we change zoning so if people do things, that it grows into something that you want? And also, how could you incentivize by allowing more housing in the area that could provide a more profitable alternative, in additional to commercial uses, that would encourage someone to redevelop their property?"

The sand and gravel mine is a tabula rasa, Mr. Trunzo said, which "presents an ideal opportunity for use of form-based code," whereas that approach may not work as well in the commercial district, he said. The Wainscott hamlet plan put forth a concept for the redevelopment of the property, but also recommended further public meetings and input to shape the plan.

The group, which was to meet four times, also scheduled a fifth meeting for Tuesday, during which it will address the reclaimed sand and gravel mine. A proposal to redevelop part of it into 50 commercial parcels is before the East Hampton Town Planning Board.

In an email on Monday, Ms. Liquori asked that participants at next week's meeting be prepared to provide input on redevelopment concepts for the 70-acre site including acceptable and unacceptable uses for the property, and opportunities the site could provide for the hamlet. Tuesday's meeting is also to include a brief discussion about an option for an advanced sewage treatment feasibility study for the area.