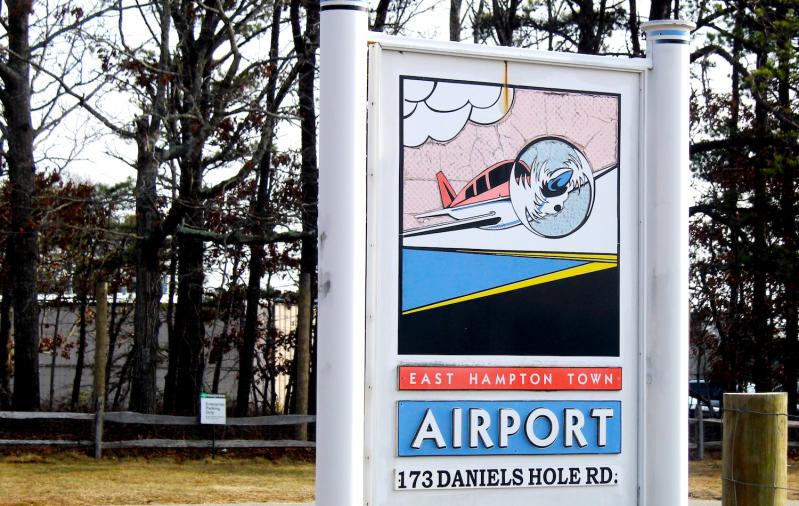 The airport's official name may be changing from East Hampton Airport to East Hampton Town Airport, but the sign can stay the same.
Durell Godfrey
By Christopher Walsh

Last Thursday, the board adopted rules and regulations governing the "new" airport, which is to operate under a prior-permission-required framework, under which pilots will need advance clearance before using the airport. The framework will limit aircraft to one takeoff and one landing per day, impose other restrictions based on their size and noise, and limit takeoffs and landings to between 8 a.m. to 8 p.m. Monday through Thursday and 9 a.m. to 7 p.m. Friday through Sunday and on federal holidays.

Consultants to the town board have concluded that the curfews and restrictions will impact around 40 percent of aircraft operations while addressing more than 70 percent of complaints about them.

For residents of the South and North Forks and as far away as Queens, 11:59 p.m. on Tuesday represents the culmination of a years-long effort to alleviate what they say has become a near-constant onslaught of low-flying, noisy aircraft over their residences during the summer season, though some of them believe the prior-permission framework does not go far enough. For them, closure of the airport is the only acceptable outcome.

In informal remarks on Tuesday, members of the town board expressed no concern that any of four lawsuits challenging the plan would result in a court-issued order precluding Tuesday's closure and the subsequent reopening next Thursday at 9 a.m. However, the town reserves the right to close the airport, Supervisor Peter Van Scoyoc said.

Meanwhile, groups opposed to the town's plan appeared resigned to the imminent enactment of the restrictions. But some have all but promised skies filled with aircraft bound for multiple alternate landing sites this summer, including Montauk's small, privately owned airport, "seaplane landing zones" in Gardiner's Bay and Peconic Bay, and sites in Southampton, Mattituck, and Westhampton Beach, worsening summer traffic both in the air and on the roads.

"We don't know of anything that's coming out that looks like it's going to stop it," one advocate for aviation interests said on Tuesday, speaking off the record about the closure and reopening. Town officials, he said, "feel very confident" that the plan will move forward without hindrance.

Three entities sued the town in February, each challenging the plan put in motion in January when the town filed notices with the Federal Aviation Administration to formally close the airport and open it anew under the prior-permission-required framework. The three plaintiffs are seeking a preliminary injunction to prevent the airport's closure.

One lawsuit was brought by Blade Air Mobility, which allows users of its app to book seats on scheduled helicopter and airplane flights. Officials of the company have stated that its clients will continue to fly to the East End, using a variety of airports and helipads if the airport in East Hampton is not available to them. That diversion of aircraft has raised concerns, particularly in Montauk, where the airport at the end of East Lake Drive could see an explosion in air and road traffic.

The Coalition to Keep East Hampton Airport Open and East End Hangars also filed suit in February seeking to prevent the town from carrying out its plan. Last month, Curtis Air Taxi and Jobs Lane Aviation petitioned the federal Department of Transportation for an emergency declaratory order preventing the town's plan. Both entities own and base aircraft at East Hampton Airport and regularly use the site.