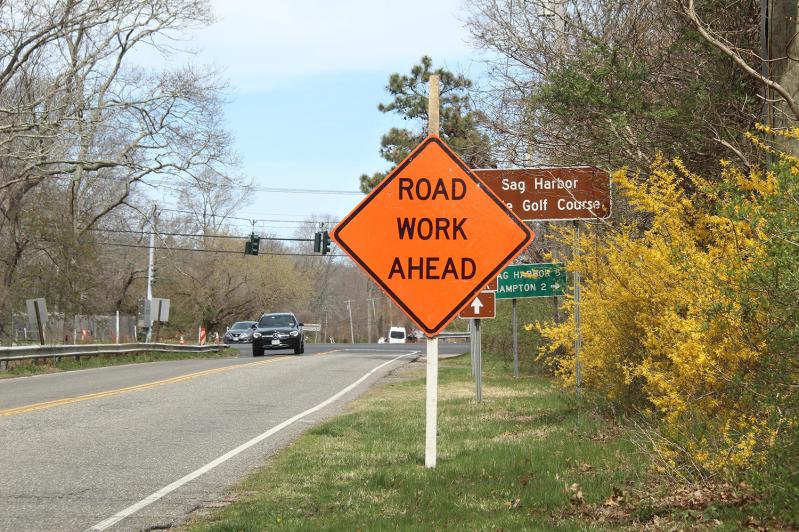 A sign of the times
Durell Godfrey
By Christine Sampson

From routine gas lines and water mains to miles and miles of road repaving and the wind farm’s landside cable installation, not a weekday goes by nowadays when there isn’t some sort of traffic delay or detour around town.

“It’s hard to keep track,” said the South Fork’s state assemblyman, Fred W. Thiele Jr. of Sag Harbor, for whom a drive along Route 114 is a frequent occurrence. Long an advocate for the total repaving and repairing of that road, Mr. Thiele assured his constituents this week that the inconvenience of the project will be worthwhile.

“I think things have moved relatively quickly once the paving began,” he said. “Having been stuck in it myself over the past couple of weeks, I get frustrated just like everybody else does, but there aren’t a lot of options.”

Even the East Hampton Town Police Department has been having difficulty keeping up. “Unfortunately,” the department wrote in an April 12 Facebook post, it “does not have enough accurate daily information from each contractor as the work progresses to provide updates on road closures or detours.”

The police advised drivers to “please be patient and make travel route adjustments whenever possible.”

Where some may wonder whether communication among the different entities, or the lack of it, is to blame, Mr. Thiele explained that it’s less about talking and more a function of the East End’s “very, very short construction season, at least for roadwork anyway.”

The Covid-19 pandemic also had an impact, causing a total shutdown of work for some time and leading to shortages in state money and labor, Mr. Thiele said.

Last week, the installation of the South Fork Wind farm’s onshore transmission cable necessitated the complete closure of Montauk Highway in Wainscott. Nighttime detours snaked through the dark, sleepy side streets of Sagaponack and Wainscott. That was on top of the work being done on Beach Lane, which included the addition of a new manhole.

Next week, according to the weekly update provided by South Fork Wind, trenching will begin along the railroad tracks between Stephen Hand’s Path and Buckskill Road. By week’s end, “the contractor intends to complete stabilization along the road shoulders and demobilize from the road,” South Fork Wind said in its update.

Mr. Thiele said most of the long-over due repaving of Route 114 from Stephen Hand’s Path to North Haven’s South Ferry terminal would be done by Memorial Day.

Now underway in Montauk is a state project to mill and repave approximately six miles of highway between the library and the Lighthouse. Road drain work is also taking place on Montauk Highway in Amagansett in the vicinity of the firehouse.

Meanwhile, in Bridgehampton, the Suffolk County Water Authority is replacing at least 2,200 feet of water main along the Bridgehampton-Sag Harbor Turnpike between Montauk Highway and Narrow Lane, “a move that will increase water pressure and improve fire protection in the area,” the utility company said in a release. The existing main is being replaced with ductile iron pipe, “which is far more resistant to breaking and expected to last well over 100 years,” the water authority said.

“The village has no real say in this. It’s not the village who is doing this work,” Mayor Jerry Larsen said during a Jan. 21 board meeting, perhaps speaking to the confusion that occurs among residents when roads are renovated and they don’t know whom to contact about it.

“That happens,” said Stephen Lynch, who is in his 11th year as highway superintendent in East Hampton Town. “People don’t know and they call our office. We direct them in the right direction.”

Montauk Highway and Route 114 are state roads, for example, while Cedar Street and Harbor Boulevard are town roads, and Springs-Fireplace Road, which was also recently redone, is a Suffolk County thoroughfare.

The town has been repaving at a clip of about 10 miles per year, give or take, out of the 300 miles in its jurisdiction. It amounts to buying about 10,000 tons of asphalt annually from the nearest plant, in Speonk, at a rate of $95.84 per ton (or $100.84 per ton for asphalt that gets trucked to Montauk, simply because of the distance). There’s also a pavement preservative that gets added “so you get more time out of roads. There’s 15 years on an asphalt road, but if you do a proper preservation, you can get 25 years, maybe longer,” Mr. Lynch said.

Good maintenance is part of that, he said, but “it’s getting more difficult because we are at an all-time low of staffing levels right now. There’s no one coming in looking for a job right now.”

East Hampton’s road-paving projects were on track to have been finished yesterday. “The line-striper will get here in middle to end of May, and they line-stripe everything so it’s all ready for the summer and everything looks nice,” Mr. Lynch said.

Mashashimuet Park's History and Future
A Conference for Young People to Create Solutions
Get Outside, Get Moving
END_OF_DOCUMENT_TOKEN_TO_BE_REPLACED