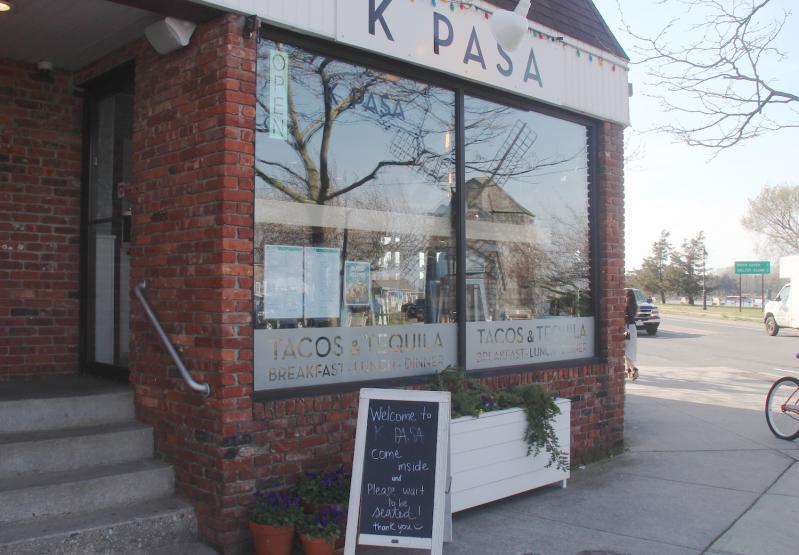 Number 2 Main Street, under legislation adopted by Sag Harbor Village earlier this year, is zoned for business use and sits in the newly created waterfront overlay district.
Durell Godfrey
By Christopher Gangemi

“We did make an offer, it was rejected,” said Southampton Town Supervisor Jay Schneiderman in a phone conversation last week about the town’s attempt to purchase 2 Main Street in Sag Harbor using community preservation fund money.

Sag Harbor Village, as part of a larger effort to develop its new Steinbeck Park, had expressed interest in the town’s buying the property, which is currently home to K-Pasa and Espresso, among other businesses.

There was disagreement as to the price, however. The town’s offer valued the property as commercial real estate. The building’s current owners, who bought it in 2018 for $18 million, are said to be interested instead in developing it as residential property.

In 2019, Southampton Town purchased numbers 1,3, and 5 Main Street with C.P.F. money, for $10.5 million. Two years later, the 7-Eleven building was purchased by Friends of Bay Street, a nonprofit hoping to use it as a new home for the theater, for $13.3 million. The appraisers for the C.P.F. may value 2 Main Street in that range, but because its 2021 price was $18 million, the two parties may be far apart.

“A lot of people have become enthusiastic about the park now that they’ve seen phase one,” said Sag Harbor Mayor James Larocca. “The conversation is ongoing,” he added. “The next step involves the owners [of 2 Main Street] bringing forth their own appraisal.”

How that appraisal might value a possible residential use in a district that does not allow residences is impossible to predict, though it may be too high for the town to pursue. “We have a lot of other things we’d like to acquire. We have a lot of priorities. This isn’t our highest priority,” said Mr. Schneiderman.

Even if a price were agreed upon, the purchase would be subject to a public hearing. Should there be much opposition, the town might back away, Mr. Schneiderman indicated. “Not everybody’s on board with this,” he said.

The town, he explained, would only acquire a vacant parcel, absent any of the businesses that now use the building. “That’s something the current owner would have to sort out,” he said.

Concerning the owners of 2 Main Street and how they might deal in future with the businesses there, David Hart, co-owner of K-Pasa restaurant, said, “There are many rumors we hear, and we don’t know if any of them are true.”

“I tell my people, look, just keep calm and carry on.”

According to the village board’s recently introduced (and not yet passed) affordable housing legislation, “mixed-use buildings containing commercial uses only on the first story and dwelling units above” might be the ultimate destination for the 2 Main Street businesses.

How a sale of 2 Main might affect Bay Street’s hopes for a new theater in the old 7-Eleven building also remains to be seen. Mayor Larocca said only that the building was “purchased by an organization that is a for-profit L.L.C., and is not directly connected, in any way that we’re aware of, with the Bay Street interests.”

“My goal was to try and expand the park, both as trustee and as mayor,” he said. “If we were to acquire, via C.P.F., the Main Street site, I would take a fresh look at Bay Street’s plans, if we ever see them. . . . We’re anxious to see what their plans are.”

Tracy Mitchell, the theater’s executive director, said in an email that while Bay Street is not involved in any way with the 2 Main Street deal, “it would be lovely to have more park if that is what ends up happening.” Bay Street will present its vision of a new theater to the village before long, she said. “We are finalizing our plans and hope to have something soon.”