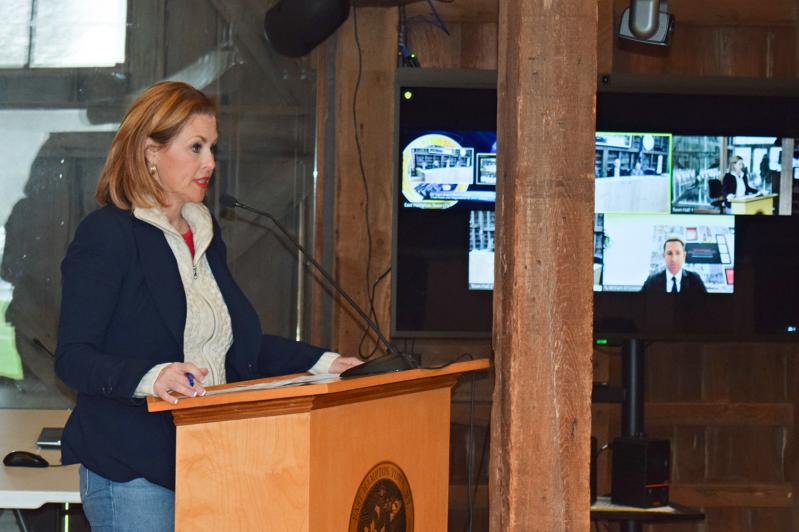 Erin King Sweeney of the East Hampton Community Alliance called on the town board to convene a working group to assess restrictions to be enacted at the airport when it reopens as a private facility next month.
Christopher Walsh
By Christopher Walsh

“Everything is on track to go from public to private use,” Bill O’Connor told the East Hampton Town Board on Tuesday.

Mr. O’Connor and Andrew Barr, of Cooley LLP, the board’s Palo Alto, Calif., outside counsel on matters relating to the airport — which is to be deactivated at 11:59 p.m. on May 17 — reiterated their opinion that, contrary to the protests of airport and aviation advocates, the transition will impact only around 40 percent of aircraft operations while addressing upward of 70 percent of the complaints.

“The town has tried to find the most problematic operations and reduce them,” Mr. Barr said, “so the community will have some relief.”

Residents have for years bemoaned a quality-of-life issue: an unending stream of noisy aircraft over their homes in the summer season. Under the new “prior permission required” framework, advance clearance will be required before a pilot may use the airport.

Supervisor Peter Van Scoyoc noted Tuesday that the new restrictions are specific to the 2022 season, “but in the big picture are subject to change.” The town is to collect data on the effects of the P.P.R. rules on the town and on the affected communities throughout the season.

Last month, the F.A.A said it had “no objection” to the town’s request to deactivate “East Hampton Airport” on May 17 and open “East Hampton Town Airport” at 9 a.m. on May 19. “The town and the F.A.A. are working collaboratively to deliver a safe new airport that has as many operational capabilities as possible,” Mr. O’Connor told the board.

It is anticipated that all communication, weather, and navigational aids will be available upon its opening, he said, and that the air traffic control tower will open on the Saturday before Memorial Day, consistent with previous years.

The private instrument flight procedures, called “special procedures” by the F.A.A., will not be publicly available. Applications to use those procedures were received from more than 110 airport users, Mr. O’Connor said, and have been processed.

The board retains the flexibility to adjust the P.P.R. framework during and after the summer, Mr. Barr said, but the inclination is to maintain consistent rules throughout the season in order to collect and compile consistent data. Information collected will be included in a draft generic environmental impact statement to be circulated for public comment, and the board will consider the impact of the P.P.R. framework in deciding how, and whether, to operate the airport in the future.

The framework is not a ban on any aircraft or operator, Mr. Barr made clear. General aviation pilots will largely have blanket permission to fly during the non-curfew hours of Monday through Thursday from 8 a.m. to 8 p.m. and 9 a.m. to 7 p.m., Friday through Sunday and on federal holidays. Those time-based permissions will impact 13 per cent of operations and around 38 percent of complaints. “People want more quiet time” to enjoy the “serene nature of the town,” Mr. Barr said.

Commercial and fractional-ownership operators will be permitted to fly one daily round trip per aircraft. This will apply to nearly all helicopters, jets, and seaplanes, Mr. Barr noted. A round trip is defined as one takeoff and one landing per calendar day, to be tracked on a registration-number basis.

Aircraft with a “noise signature” of 91 “effective perceived noise in decibels” or higher will be limited to one round trip per day. “To be clear, fixed-wing, piston-driven aircraft are presumed not noisy,” Mr. Barr said. The noise-based permission would eliminate 11 percent of noise operations and address around 20 percent of complaints.

It is contemplated that at some point in the future, lead-based fuel will be phased out of the new airport and not available for sale. The town is also considering using a portion of landing fees assessed at the new airport for carbon offsets and credits.

Several people spoke for and against the new P.P.R. framework at Tuesday’s meeting. Erin King Sweeney of the East Hampton Community Alliance, a pro-aviation group, cited a Newsday report saying that 40 percent of complaints about the airport came from just 10 households, and said that anti-airport activists are publicly urging residents to file noise complaints before the new framework is even in place.

“It is for this reason that E.H.C.A. is calling for the establishment of an airport working group to transparently assess the ‘success’ of the trial P.P.R. and make recommendations going forward,” she said. “We acknowledge that this working group should not serve as a political forum for a variety of interest groups to get on a soapbox and derail progress. Rather, we believe this working group should be formed within the town’s framework and be subject to strict participation guidelines.” This, she said, would give residents “the necessary comfort that the future of the airport in East Hampton will be successful.”

Kathryn Slye, a frequent critic of plans to restrict airport operations, complained about the recently introduced schedule of new landing fees, which will double and triple fees for many aircraft. “It appears the town created the landing fee structure for the sole purpose of discouraging use by local aircraft,” she said, “and drive off local aviation from the community.”

Others addressing the board were supportive of the measures. “The proposed P.P.R. regulations, we believe, will have a significant impact,” Mr. Van Scoyoc told one speaker, “and we’re going to study the actual impact of what we’re proposing. We can make adjustments to get to the right balance.”

Mashashimuet Park's History and Future
A Conference for Young People to Create Solutions
Get Outside, Get Moving
END_OF_DOCUMENT_TOKEN_TO_BE_REPLACED