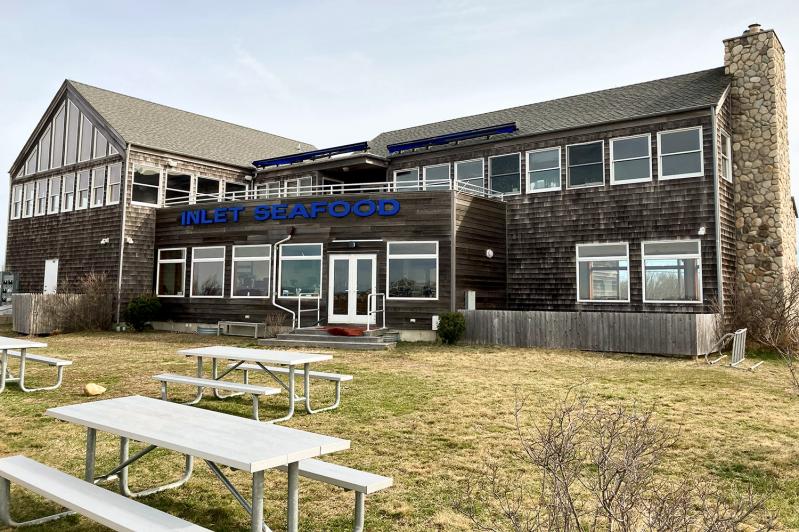 Inlet Seafood hopes to get permission to put up an awning for outdoor seating, but has run into a snag over a 2018 revegetation plan that was never completed.
Steve Lipani
By Christopher Gangemi

Inlet Seafood, the popular seafood restaurant off East Lake Drive in Montauk, has asked the East Hampton Town Planning Board for what would appear to be a straightforward request — the addition of an 1,800-square-foot vinyl awning to accommodate some seasonal outdoor seating — but has run up against other issues that cast a proverbial shadow over the application.

In the off-season, Inlet Seafood would remove the awning. No new seating would be added to the restaurant, and “sanitary flow,” often a big issue for the planning board, would not increase. In this era of Covid, it seems like a reasonable request, especially considering the intensification of use proposed just down the road, at the former Rick’s Crabby Cowboy Cafe. The Town of East Hampton, after all, is drafting legislation to allow the relaxation of outdoor dining rules, put in place during the darkest days of the Covid-19 pandemic, to become permanent.

The main issue, however, according to the Planning Department’s site plan evaluation is that the parcel is over-cleared by 32,000 square feet. Inlet Seafood is in a harbor Protection Overlay District, and so the parcel has a maximum allowable clearing of 50 percent. Back in October 2017, when Inlet Seafood was requesting permission to add a bar and storage building, the planning board had asked its owners to revegetate the property. They never added the bar or storage building, so they have yet to revegetate the parcel.

Also, because the awning would effectively remove 30 feet between the existing restaurant and the nearest wetland, Lake Montauk, a natural resources special permit is required.

A catch-22 has developed: In order to add the awning, the restaurant needs to comply with its previous revegetation plan. But if it complies, there will be no room for the awning.

“The natural resources special permit review is working its way through the process and will be completed in due course,” said John Huber, of Dayton, Voorhees & Balsam, the lawyer representing Inlet Seafood.

Taking that issue off the table, he wanted to focus the board’s attention on the revegetation plan. “All that clearing was pre-existing nonconforming,” he said. “They have done no clearing in the past 30 years.”

Michael Hansen, the newest member of the board, asked a simple question, “How, over 30 years, has nothing grown in that space?”

“So, they clear it,” said Samuel Kramer, the board’s chairman.

He asked the board to “have a site meeting” to look at where the high priority revegetation areas are, and then amend the 2018 site plan approval. “Let’s look at it with a fresh set of eyes and under the current situation, and see if we can come up with a revegetation plan that is collectively created, with insight from all stake holders, and is actionable,” he said.

“This really puts me between a rock and a hard place,” said Louis Cortese, a planning board member. “In order for this area to have an awning, it’s going to necessitate the over-clearing to remain in place. To me, that’s a problem.” He was sympathetic to the restaurant, however. “It’s a benefit to everyone, the applicant as well as the patrons. But I can’t get over the stumbling block of overlooking the over-clearing.”

“The problem was they didn’t implement the 2018 plan, which would have brought them much closer to compliance,” said Randy Parsons, another board member.

“They want to revisit the whole situation going back to 2018. I don’t know if you’re going to succeed in that. It’s a big ask,” said Mr. Kramer.

Mr. Parsons brought up the septic system, even though the application would not increase sanitary flow, because of the environmental sensitivity of the land.

Mr. Huber showed interest. “Hey look, if you want to propose they put in an I/A system, I’m sure the applicant would listen. Anything that we can try to make this work is game for discussion,” said Mr. Huber.

“That would certainly be an attractive addition to the application,” said Mr. Parsons.

Mr. Kramer was quick to add, “I wouldn’t want you to take that as any kind of quid pro quo, or any kind of commitment on this board’s part.”

“If there’s a way to offset this outdoor dining plan with revegetation so the numbers work out . . . then I’m all for it,” said Ian Calder-Piedmonte, another board member.

But, he added, “Not over-clearing an area in the harbor protection overlay district is important.”

“You’re going to have to deal with the clearing issue,” said Mr. Kramer. “It’s too physically large, I mean . . . it’s close to three-quarters of an acre.”

Mr. Huber agreed to communicate the board’s concerns to Inlet Seafood. In the meantime, his clients would wait for the completion of their natural resources special permit review.