Could reopen as private facility after two days 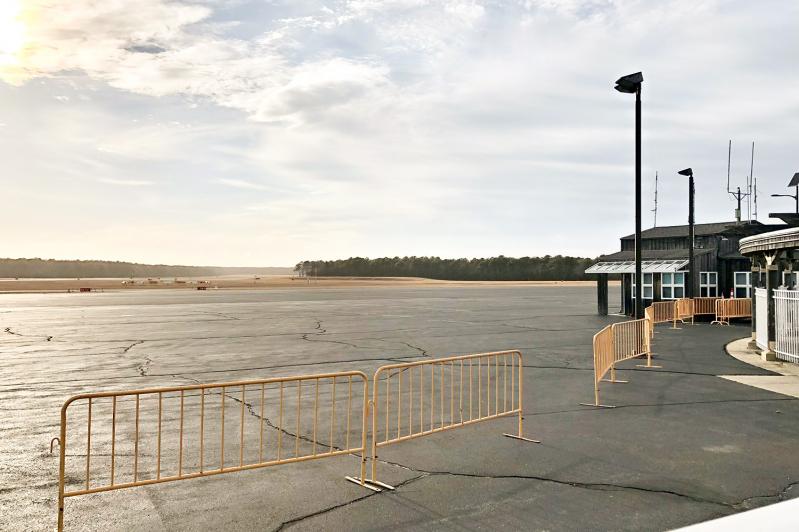 The time frame for the closure and reopening of East Hampton Airport has shifted as the town negotiates details with the F.A.A.
Carissa Katz
By Christopher Walsh

The East Hampton Town Board voted last Thursday to postpone the planned temporary closure of East Hampton Airport and its reopening as a new, private-use airport following an executive session to discuss the plan, which has incited furious opposition and multiple lawsuits by interests from airport users and the aviation industry to residents who fear diversion of aircraft to their neighborhoods.

A plan to deactivate the airport on Feb. 28 and open a “new” airport on March 4 under a prior-permission-required framework, under which advance clearance is required before a pilot may use the airport, has been scuttled. The new date for closure is May 17 at 11:59 p.m., with a reopening planned for May 19 at 9 a.m.

The decision followed a Feb. 16 meeting with Federal Aviation Administration officials, according to the resolution, during which “the town and the F.A.A. discussed a new timeline which is acceptable to both parties for the closure of the public-use airport and the opening of the private-use airport,” as well as a phasing in of services including tower operations and instrument approach procedures.

Based on discussions between the town and the F.A.A., “the town believes that it is prudent and advisable to postpone the original closure date” to May 17 “so that the town will be in a position to open a new private-use airport after a shorter closure period immediately following the updated closure date,” according to the resolution.

A statement issued from Town Hall later on Thursday further explained the postponement. During the most recent meeting, it said, the F.A.A. “noted that it expects to have all of its internal processes completed for opening of the new private-use airport,” with the exception of the introduction of instrument flight procedures, no later than May 19.

Upon completion of an aeronautical study, the F.A.A. “anticipates that the air navigation facilities currently available at the East Hampton Airport will be available upon activation, with the caveat that instrument flight procedures may not be immediately available.” All weather, navigation, and communication aids “should be operable and available.” The private air traffic control tower will be in place consistent with how and when it has operated in the past; new agreements with the New York Terminal Radar Approach Control, known as TRACON, will be entered into; the town will obtain its own ground communication outlet for real-time communication with air traffic controllers, “and the new airport will be available for safe use by operators.”

The town, according to the statement, will work with a third-party vendor approved by the F.A.A. to design and implement special use instrument procedures. Both parties, the statement says, are optimistic those procedures will be available “at some point during the 2022 season.” The statement goes on to say that the F.A.A. requested that the town coincide the activation of a new airport with its “charting cycles.”

Restrictions on aircraft operations at East Hampton Airport, which the board intends to implement, “could have potential significant impacts on noise at and surrounding” Montauk Airport, Gabreski Airport in Westhampton Beach, and the Southampton helipad because of diversion from an East Hampton Airport with restricted operations, a consultant told the board on Feb. 15.

The resolution last Thursday directs the town’s environmental consultants to “evaluate the environmental effects of the new closure dates as well as the impacts related to the phased introduction of services to the airport,” to prepare a revised environmental assessment form for the board’s consideration at its next scheduled meeting, which is on Tuesday, and to “make a new recommendation to the town board for a SEQRA determination of significance,” including whether its Jan. 20 negative declaration should be amended and/or rescinded.

The town board voted last Thursday to retain the Whiteman Osterman & Hanna, Cooley, and Rigano law firms to represent the town in the litigation. Notified of the board’s resolution, the East Hampton Community Alliance, which advocates keeping East Hampton Airport open, issued a statement saying it “applauds the decision of the town board to delay the closure” of the airport. “We remain hopeful that productive discussions with the town and airport users can avoid any type of closure and be the basis for a new future” for the airport “and our community.”

Loren Riegelhaupt, a spokesman for the Eastern Region Helicopter Council, also issued a statement. “We are pleased the East Hampton Town Board is starting to listen to common-sense solutions and delayed their plans for the airport to allow for more discussions and alternate solutions,” he said. “For everyone’s best interests, we ask that all sides stop filing lawsuits and implore the town not to rush ahead with their misguided plans to close the airport. Instead, we suggest that all of the impacted parties come together to find a solution that works for all.”

A Conference for Young People to Create Solutions
Get Outside, Get Moving
Two Traditions, One Fair in Springs
END_OF_DOCUMENT_TOKEN_TO_BE_REPLACED