‘You have enough . . . they aren’t special anymore’ 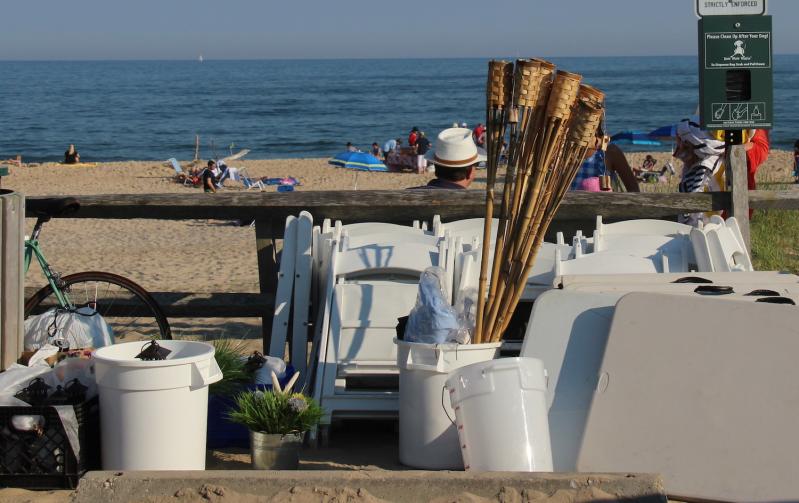 Given the expanding interest in catered events on East Hampton Town beaches, the town board discussed language clarifying that the public beaches remain open to the public even during permitted events.
Durell Godfrey
By Tom Gogola

July Fourth drone shows, catered weddings in the sand, and surf instructors at Ditch Plain were among the issues invoked by the East Hampton Town Board during its Tuesday work session as the town looks to update its laws addressing permitted special events at public, residential, and commercial spaces.

The town now requires special event permits across five disparate scenarios: private parties at residences, which require a permit if there are more than 50 people in attendance; assemblies on commercial property that aren’t consistent with the facility’s zoning or site-use provisions; private events on public property; parades and walking or running events, and art sales at an artist’s home.

After a Covid-era decline that saw a mere 78 permits issued in all of 2020, this year the town issued 582 special permits across all categories, eclipsing the 577 issued in pre-Covid 2019.

Of those 582 permits, 286 were for events on public property, 156 were commercial property permits, and 129 were for events at residential properties. A half-dozen parade and walking or running event permits and five art-sale permits were also issued.

The board discussed enacting stiffer penalties for those who violate the terms of their permits and enhanced enforcement, among other changes to code that might, for example, require a town board resolution for special events that take place on community preservation fund properties — which, the town’s special events committee noted, has already been the practice.

Another proposal from the committee might require a residential special event permit if more than, say, 20 cars were going to be parked on the street, regardless of whether parking was otherwise permitted there.

Meanwhile, the committee highlighted a spike in beach-bound special events in the post-Covid environment as it suggested adding language to those public-space permits “clarifying that public property/the beach is still open to the public and does not give exclusive rights to the property” and strengthening language on the permits to emphasize that parking lots are also a part of public property and the beach.

The committee also suggested adding language that explicitly forbids sparklers, fireworks, and lanterns from any type of special event permit.

Councilwoman Cate Rogers, who serves on the board’s special events committee with Councilwoman Kathee Burke-Gonzalez and a slew of other public officials, said the town should consider a new type of permit, the “seasonal special event permit,” which would be used for commercial recreational activities that take place on public properties — such as surf camps.

During Tuesday’s work session, Ms. Rogers addressed an expanding interest in catered events on town beaches, especially weddings, which she says should be capped at 50 attendees.

Ms. Rogers noted that of the 72 permits the town issued this year for catered beach events, 70 of those were for events at which 50 or fewer people attended.

According to the committee’s PowerPoint presentation, the town issued permits for seven weddings in 2022 that ranged in size from 32 to 150 guests.

Town Supervisor Peter Van Scoyoc noted that the issue may not be with excessive numbers of people at a given event, but that almost all of of the applications were to use public space for private functions held either at Atlantic Avenue Beach and Indian Wells Beach in Amagansett or Town Line Beach in Wainscott.

(Town code does allow for small wedding parties on public beaches of up to 20 people without a special events permit.)

As for those “drone shows,” they’re an increasingly popular July Fourth alternative to fireworks and can feature up to 200 lighted drones in the sky at once, making shapes and banners and moving images. “We looked at this,” said Ms. Burke-Gonzalez, “as an event in the sky, as an attractive nuisance.”

Mr. Van Scoyoc suggested the town regulate drone shows the same way it looks at fireworks shows, of which three are grandfathered in as permissible each year — in Montauk, at the Devon Yacht Club in Amagansett, and at Three Mile Harbor.

The bigger issue, however, said Ms. Burke-Gonzalez, is when there are multiple special events occurring over the same summertime weekend, they stretch emergency services and traffic control officers’ ability to keep everyone safe.

She pointed to a weekend in July that included the very popular Soldier Ride bike ride, a fireworks show, an event at Amagansett Square, and the Montauk Lighthouse Triathlon.

“The purpose of the committee,” said Mr. Van Scoyoc, “is to make sure we don’t have too many events happening at once.”

He suggested the town should reach out to organizations that hold events every year to nail down prospective dates for their events where possible, with an eye toward keeping the traffic and general chaos at a minimum.

The subject of surfing came up later in the work session and the board agreed to keep the permitting conditions in place that were set in 2022. At Ditch Plain, for example, this means a maximum of five students and five instructors per teaching camp are allowed.

Councilman David Lys noted, however, that there are instructors who hang out at the popular Montauk surf spot waiting for a prospective student.

Those “fly-by-nighters,” as Mr. Lys called them, are often people “sitting on benches trying to pick up lessons.”

Point being, he said: Enforcement always has to be enhanced.

Councilwoman Sylvia Overby suggested that increasing fines for those who violate the terms of their special permits would serve as a deterrent. Those fines now range from $250 to $500 and reflect the cost of the permit.

The idea of increasing those fines to up to $1,000 was raised, though Mr. Van Scoyoc said that in many cases, those fines are considered the price of doing business and would not likely serve as deterrents, even if they might be a lucrative option for the town.

Under New York’s home rule regime, the town can exceed what’s permissible as fines under state criminal procedure law, said Assistant Town Attorney David McMaster, by way of obliquely addressing Mr. Van Scoyoc’s somewhat rhetorical question concerning special permit scofflaws: “Do we even have a book to throw at them?”

Mr. Van Scoyoc said the town would now move forward procedurally on recommendations set out by the committee — except for the commercial piece of the permitting regime.

To that end, board members discussed the possibility of capping the number of special events permits that a commercial enterprise could apply for in a given season.

“At a certain level,” said Mr. Van Scoyoc, “you have enough events, and they aren’t special anymore.”