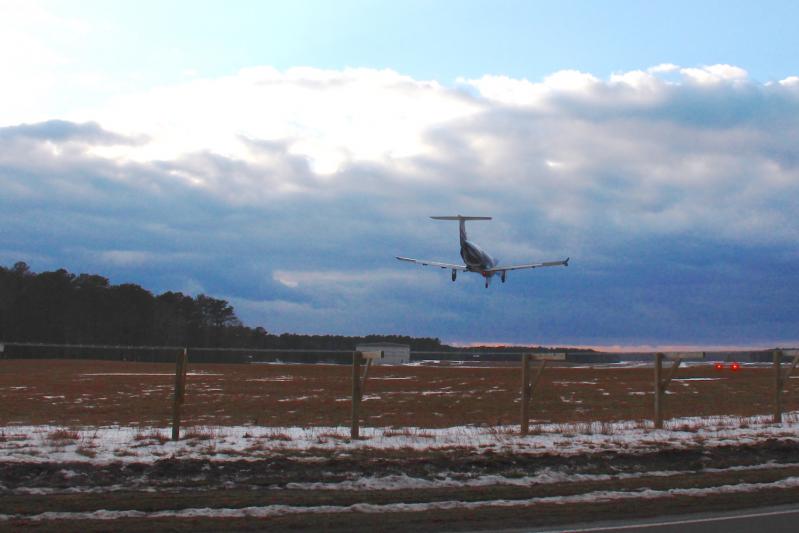 A private-use East Hampton Airport will be subject to local control under what the Federal Aviation Administration calls a prior-permission-required framework.
Durell Godfrey
By Christopher Walsh

As it was expected to do, the East Hampton Town Board voted unanimously on Thursday to deactivate the East Hampton Airport, following years of residents’ complaints about its impact on their quality of life.

The airport will be deactivated and permanently "closed" in its current model on Feb. 28, but will be opened anew as of March 4 as a private-use airport. That date was chosen after discussions with the Federal Aviation Administration and a review of historic operations at the airport. The board anticipates little disruption to aviation during this period as the dates during which it will not be available have historically seen very low levels of flight activity.

The private-use airport will be subject to local control under what the F.A.A. calls a prior-permission-required framework. Under this framework, advance permission is required before an aircraft may use the airport. It will initially mirror that of a public-use airport, but the board, in a statement issued after the vote, promised that “substantive restrictions will be implemented” prior to the summer season in conjunction with a data collection period pursuant to the New York State Environmental Quality Review Act.

The new model, according to the statement, provides the town with flexibility to control the use of the air navigation facilities to respond to community concerns while also allowing certain aeronautical uses to continue. “The town board believes that obtaining maximum flexibility over future operations is necessary to ensure that the entire community’s quality of life -- from Wainscott to Montauk -- is thoroughly considered and protected,” the statement says.

Around 40 people, including residents of East Hampton and Southampton Towns and from as far as New York City, some of them professional pilots, called in to the town board’s work session on Tuesday to weigh in on the airport. Some urged the board to close the airport permanently, while others said that its operations should be maintained as-is or with minimal changes. Many residents of Montauk fear that the closure of East Hampton Airport will divert traffic, particularly helicopters, to the privately owned airport in that hamlet.

“I think this is a really important step that we’re making today, where we finally, as a town, will assert control over an airport that we own but had no ability to regulate,” Supervisor Peter Van Scoyoc said after the board’s vote on Thursday to file the appropriate forms with the F.A.A. to deactivate the airport. “We look forward to working with the community to address longstanding concerns” and “balance the airport in a way that really reflects the community’s standards” while protecting quality of life and providing the positive amenities of an airport.

“Operation of a private-use airport will enable us to review and analyze potential changes to airport operations and make adjustments to address long-held community concerns,” Mr. Van Scoyoc said in the statement.

The Eastern Regional Helicopter Council was quick to denounce the board’s move. “East Hampton Town’s reliance on faulty legal advice to close the East Hampton Airport without a realistic plan to have it reopen is misguided, reckless, and will ultimately prove disastrous for the surrounding communities like Southampton, Southold, and especially Montauk,” said Loren Riegelhaupt, a spokesman for the council. “Closing the East Hampton Airport will not only further harm the local economy and potentially delay emergency responders, but also force helicopters and other aviation to other local airports. This diverted air traffic to the other airports will not only exacerbate noise concerns and hectic air traffic but also further exacerbate the already overcrowded roads.”

“Rather than further clogging the roads and negatively impacting small businesses and residents,” Mr. Riegelhaupt continued, “there is a common-sense solution that allows for reduced air traffic at East Hampton, alleviating traffic, and keeps the vital local economy thriving.”

“We urge the town council members to divert from the legal advisers’ radical, dangerous, and faulty course to close the airport and instead work with the aviation experts on a solution that works for everyone. The aviation industry remains open and available to work with the town as we have continuously asked to be during this process.”

Free Car Seat Checks in Southampton
Battle of the Books, and More Fun for Teens
This Week's Happenings in Montauk
END_OF_DOCUMENT_TOKEN_TO_BE_REPLACED