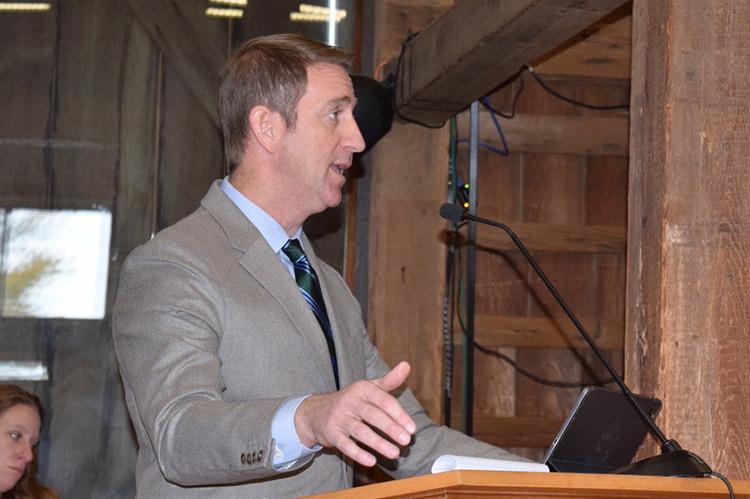 Stymied by lawsuits and a New York State Supreme Court justice in its efforts to implement restrictions on aircraft operations at East Hampton Town Airport, the town board discussed options with its consultants on Tuesday, six days after appealing the judge’s Oct. 19 ruling prohibiting the town from closing the airport and reopening with new restrictions until after an environmental review.

Bill O’Connor of the Cooley law firm, a consultant to the town, summarized the town’s process to assess residents’ wishes regarding the airport, following the September 2021 expiration of agreements with the Federal Aviation Administration regarding the airport’s operation known as grant assurances.

Engagement with residents, he said, revealed that “the status quo was not compatible with the community, especially in the growing nature of use and traffic,” which he said was unsustainable. The plan arrived at was a brief closure of the airport as a public facility, scheduled for May 2022, and a reopening as a private one with restrictions based on curfews and the size, noise, and operator of aircraft, which he said would allow continued use of the airport while balancing its proponents’ and opponents’ wishes. The latter group has long complained about a ruined quality of life due to the volume of aircraft, particularly noisy aircraft such as jets and helicopters.

The town had planned to gather “real-world” data on the impact of the imposed restrictions during the summer season, when flights are most frequent. But “a series of lawsuits filed in multiple forums” thwarted the plan, Mr. O’Connor said, with Justice Paul J. Baisley Jr. issuing a temporary restraining order just prior to the planned closure and reopening. This, he said, “had some impact on your ability to implement the trial restrictions to gather the data we had planned to gather over the summer.”

Separate lawsuits in State Supreme Court came from Blade Air Mobility, the Coalition to Keep East Hampton Airport Open, and East End Hangars, each with a number of individuals as co-plaintiffs. State court cases were also brought by Manny Vilar, a Springs resident, and Long Island Airlines. The National Business Aviation Administration filed a lawsuit in federal court. The plaintiffs claim that the town violated the State Environmental Quality Review Act, or SEQRA, and the federal Airport Noise and Capacity Act.

The lawsuits resulted in Justice Baisley’s issuance of the temporary restraining order and later the Oct. 19 ruling in which he stated that by planning to conduct an environmental impact statement study after the airport’s closure and reopening, and not before, the town had acted beyond its legal abilities and in an arbitrary and capricious manner. The implication, Mr. O’Connor said, “is that you needed to study everything using simulated data, versus real-world data.”

The point of implementing flight restrictions under a prior-permission-required, or P.P.R., framework, said Dan Ruzow, another consulting attorney, was to be able to chart where flights might divert to, such as Francis S. Gabreski Airport in Westhampton Beach or the privately owned airport in Montauk. The town would have gathered data on air and road traffic, and air quality and noise impacts in other locations, and use that data in an environmental impact statement.

The consultants will “ask our experts to forecast what they think those changes will be in implementing a P.P.R.,” Mr. Ruzow said. “Because of that change in the nature of work to be done, we have to re-initiate the SEQRA process.”

A draft generic environmental impact statement scope published in February, ahead of the anticipated closure and reopening, drew some 500 comments from the public. A new one will have to be prepared, Mr. Ruzow said, anticipating that that will happen in around four weeks. It will then be presented for public comment. Those comments will be analyzed and included in a final scope, he said, describing a months-long process.

The upshot of the Oct. 19 ruling, Supervisor Peter Van Scoyoc said, is that “rather than taking real data from the impacts of potential diversion or other aspects of changing the airport, we will be doing that in a more theoretical way in compliance with the court.” The ultimate goal, he said, is “to end up with an airport that is accepted by the community. And if it’s not, the community will ultimately seek its closure.”

The “vast majority” of residents “feel the airport has outgrown its footprint,” he added, and the town will continue to seek to address that. It is “very difficult to imagine the airport to continue as-is without any kind of restriction.”

The town’s Nov. 9 appeal of Justice Baisley’s ruling will mean “another level of review” that could take up to two years, Mr. O’Connor said, which “is difficult, given the pressing need” to address residents’ quality-of-life concerns.