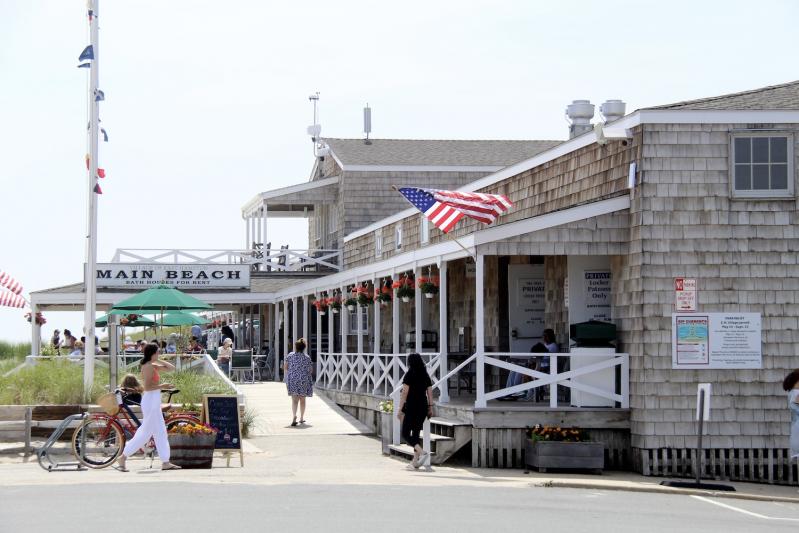 Many of the 176 lockers at the Main Beach pavilion go unused.
Durell Godfrey
By Christopher Gangemi

Despite the approach of winter, the East Hampton Village Board turned its attention to Main Beach and summer recreation issues at Friday’s work session.

Apparently, many of the 176 lockers at Main Beach go unused. However, the parking passes for Lot 1 that are tied to the lockers are always used. Christopher Minardi, the deputy mayor, brought up the idea of separating the locker rental from the Lot 1 parking pass. He hoped that by doing so people who were only using the parking and not the locker would give up their lockers, freeing them up for others.

“Families outgrow their lockers, but don’t want to give up the parking pass,” said Mr. Minardi.

It now costs $500 a year for a locker and a Lot 1 pass, and there is a waiting list for beach lockers.

Michael Tracey, the village police chief, spoke about an idea to move the Americans with Disabilities (A.D.A.) parking spots closer to the A.D.A. ramp at the Main Beach pavilion. At present, the spots are on an incline. He suggested moving them into the 15-minute parking zone. “I think we’d make a lot of handicap folks happy,” he said.

The board discussed where to move the 15-minute spots instead. Ms. Doyle seemed particularly concerned about losing them entirely, pointing out that many people use the spots to load and unload beach gear through the day. However, replacing two full-day spots with 15-minute spots was also a problem.

Marcos Baladron, the village administrator, said that the village engineer would make a diagram of the parking lot, so that board members could have a clear idea of a potential spot reconfiguration.

The board agreed to revisit the matter at its next work session on Dec. 2.

The lesson Mayor Jerry Larsen learned from toying with the idea of planting red cedars on village land that would block the view of the Main Beach parking lot for a private residence was that people value the view of Hook Pond.

Dave Collins, the superintendent of public works, said one way to open the view more would be to remove the nonnative species of shrub that have proliferated along the edge of the pond.

“I’d be in favor but is there any benefit the pond gets from those shrubs?” asked Mr. Minardi.

Mr. Collins said the area has become infested with weeds and it would be easier to maintain without the nonnative vegetation.

The board decided to take a closer look at the pond’s edge, and to discuss shrub removal again at the next meeting.

In recreational news unrelated to the beach, the board again discussed draft legislation for pickleball court restrictions, which had been raised at the October work session. The village legislation was heavily influenced by new rules adopted by Sagaponack Village in the spring.

The new legislation would allow pickleball courts only on lots that are 60,000 square feet (1.37 acres) or larger. To reduce noise pollution, all courts would have to be sunk “four feet below grade when measured from the lowest adjacent natural grade” and have a six-foot “sound attenuation wall” installed around three sides of the court. An existing tennis court could be converted if it used the same noise-mitigating strategies. Courts could not be lighted for night play.

A public hearing could be held on the legislation as early as Dec. 16.