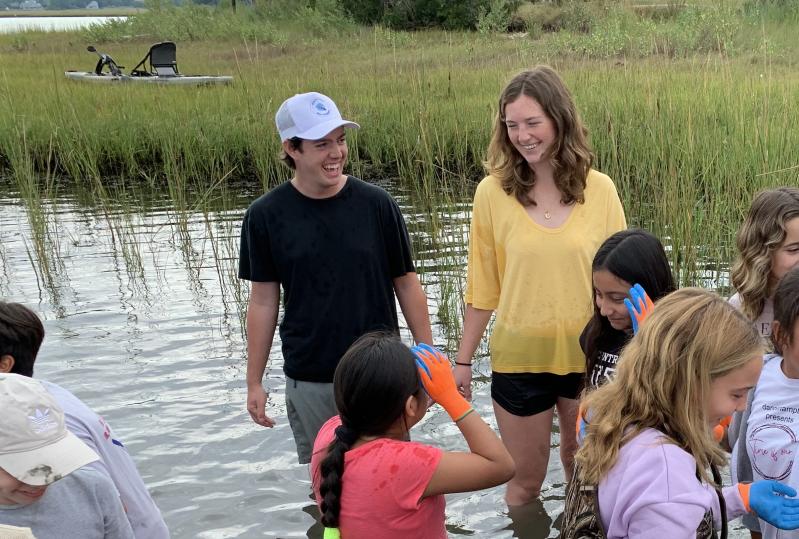 Skye Tanzmann and Nick Cooper, East Hampton High School students and interns with South Fork Sea Farmers, had updated the town board last week as to the September installation of a 50-yard-long oyster reef in the harbor. They delivered a similar presentation to the trustees on Oct. 14, along with a request to permit two more oyster reefs.

“What does an oyster reef do in helping Accabonac Harbor?” Skye asked. There is a eutrophication problem there, she answered, with excessive E. coli bacteria as well as excess nitrogen and phosphorus entering the water, promoting harmful algal blooms. Because a single oyster can filter up to 50 gallons of water per day, “an entire reef will have an immense, profound impact,” she told the trustees.

An oyster reef can also help to prevent erosion and even reclaim land, Nick said, by reducing and absorbing the impact of waves.

The existing reef is composed of biodegradable bags bound together, each holding spat, oyster larvae that have attached to shell. Caretaking will be “mostly monitoring,” said Bob Tymann of South Fork Sea Farmers, with the hope that the reef will thrive and foster natural growth.

Nick, who is in 11th grade, proposed a second reef, “tight to the shoreline,” in front of 113 Louse Point Road, for which he would be the primary caretaker. The site has a significant erosion problem, he told the trustees. The property is changing hands, he said, and “we’re in the process of contacting the new owner and getting approval.”

The waterway and bottomland are under trustee jurisdiction on behalf of the public, but the trustees nonetheless said they hope for the property owner’s consent.

A similar erosion problem exists at the future site of a third oyster reef, off 104 Gerard Drive in Springs, said Skye, who is in 12th grade and will graduate next year, after which Nick may assume caretaking of that reef as well. “But as president of the Environmental Awareness Club” at the high school, “I’m hoping to get those members involved” and make it a club project, she said. They also hope to engage the wider community: sixth graders from the Springs School assisted in the first reef’s construction, and Nick suggested involving students at the John M. Marshall Elementary School in East Hampton in future reef construction.

Mike Martinsen, a trustee and an oyster farmer himself, suggested constructing the new reefs toward the end of June, “just before the spawn happens in the wild . . . . the closer you put that dry, clean shell in the water to the spawning event, the better chances of success,” he said. That coincides with the plan, Mr. Tymann said: “It’s a logical step to try to bring the harbors back to what they used to be.”

The six trustees present voted unanimously to permit construction of oyster reefs in the delineated locations.

Also at the meeting, the trustees mulled an opening date for the harvesting of bay scallops in waters under their jurisdiction. New York State waters open on the first Monday in November, falling this year on Nov. 7. The town code allows the taking of scallops from trustee waters between the third Monday in October and March 31 of the following year, but the trustees have traditionally opened their waterways shortly after the opening of State waters, to allow additional time for the mollusks to spawn. In recent years, they have set the Sunday following the opening of State waters as the date, allowing recreational harvesters the opportunity to dig for scallops.

For the fourth year in a row, there has been a significant die-off of mature scallops in local waters, and the harvest is once again expected to be disappointing. But “State waters are very active,” said Bill Taylor, a deputy clerk of the trustees, who suggested that the trustees wait an additional week, or even two weeks after state waters open to scalloping, “so guys have two weeks to work in state waters.”

The trustees agreed to vote on the opening date at their next meeting, on Monday.