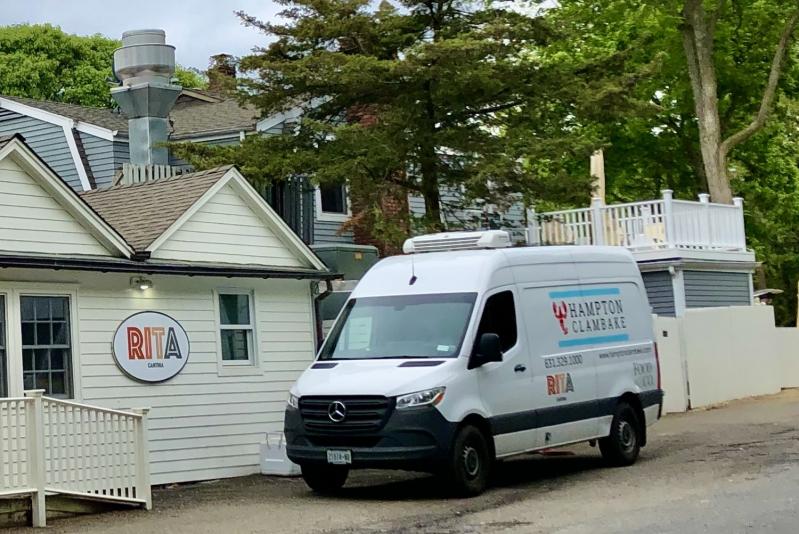 Marc Miller, an owner of Rita Cantina, said that the increased traffic in the neighborhood has nothing to do with the catering business, but is solely due to the popularity of the restaurant.
Carissa Katz
By Christopher Gangemi

Rita Cantina, a popular Mexican restaurant in Springs, was dealt a blow last week by the East Hampton Town Zoning Board of Appeals, whose members agreed with a determination by Ann Glennon, the town’s chief building inspector, that catering businesses on the restaurant premises are operating illegally.

In a phone call to The Star, Marc Miller, who, with his brother Eric, is a partner in the business, said, “We definitely don’t agree with the ruling. We don’t believe catering impacts any of the issues they have. We’ll be appealing.”

Rita Cantina, with an approved 76-person seating capacity, is surrounded by residences. It occupies a lot near the corner of Maidstone Park Road, and has no on-site parking. Neighbors have complained since its opening that the addition of catering has generated more trash, traffic, and use of the adjacent roads.

“Ann Glennon’s interpretation hasn’t changed since August 17, 2021, when a letter was provided to the property owner,” said Denise Savarese, a zoning board member. “To this day, they are still providing services for Hamptons Clambake and Food and Co., which provide different menus and additional items that are not part of the restaurant Rita Cantina.”

Generally, the town allows catering as an “accessory use” to a restaurant; provided, however, that the caterer is a subordinate extension of the restaurant, offering the same menu.

The town recognizes that a restaurant and residence are allowed at Rita Cantina’s location; those two uses are not in question. Since the 1970s, restaurants have come and gone there. One of them, Michael’s, was in business for more than 30 years.

Since Ms. Glennon’s 2021 determination, however, the town has held that the two catering units are illegal, on the grounds that they represent an additional use of the space.

“They kept referring to uses as pre-existing nonconforming,” said Theresa Berger, a board member, referring to an argument made by Jason Vlahadamis, a lawyer representing the Miller brothers at the zoning board’s meeting last month. “It wasn’t the uses that were pre-existing non-conforming, but the lot. The certificate of occupancy has the residence and the house.”

“Even before catering, we already had a condition in this residential neighborhood that has always been slightly difficult for them to navigate,” said Edward Johann, vice chairman of the board. Rather than appealing to the Z.B.A., he said, Rita Cantina could have appealed to the planning board for a “multiple business complex special permit.”

Eric Schantz, a senior town planner, wrote in a memorandum to the zoning board that the restaurant had not applied for such a permit. Even if it had, he said, “the lot does not have the requisite lot area to yield additional uses as per the Town Code.”

“Given the volume of food leaving the site and the several catering trucks working from there, it does represent the presence of a separate business,” said Mr. Johann. “I think it’s obvious, with the different menus addressing different needs within the community, it represents a usage that would not be approved under their current situation.”

Marc Miller disagreed with that assessment. The increased traffic has nothing to do with the catering business, he said. Rather, he insisted, it is solely due to the popularity of their restaurant.

“If the issue is that we’re a successful restaurant, I’m not going to apologize,” he told The Star.

Members were unanimous, however. “Ann Glennon said it best: Based on her 30 years of experience she has never seen anything like this — multiple businesses being operated at the same location,” said John McGivern. “This is not about takeout or Uber Eats — that insults our intelligence. They were using Rita’s kitchen to support two separate business lines.”

“I think this is a black-and-white decision. Code says two uses, there were clearly three uses,” said Roy Dalene, board chairman. “It troubles me that the applicant, when they purchased the property, didn’t go to the town to seek approval or advice. They just went ahead, did this, and are now bending the law.”

“I uphold the building inspector’s determination on this,” he concluded.

Mr. Miller said by phone that Rita Cantina wants to be “good neighbors.”

“We don’t want to infringe upon people’s peace,” he said. “Eric and his wife and their son, Adam, live in the house next to the restaurant. They’re neighbors too.” He suggested that many of the complaints about the restaurant came from a small number of people.

“There are a lot of neighbors who like having us there and enjoy being able to walk to a great restaurant,” he said.

The zoning board has until Nov. 14 to vote on the matter. For the time being, though, neighbors can enjoy some quiet. Rita Cantina is closed, and won’t be open again until May.