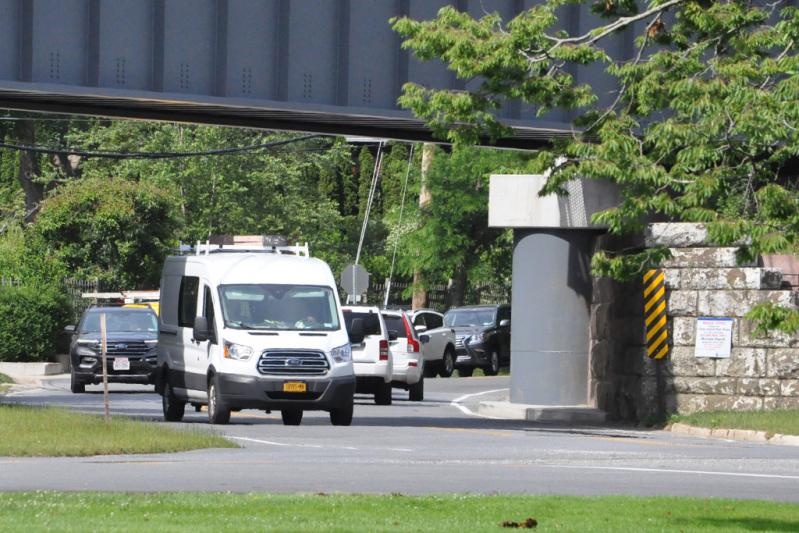 Traffic increased on Accabonac Road in East Hampton after a railroad trestle there was raised to accomodate large trucks.
David E. Rattray
By Christopher Walsh

Three months after several residents of a southern portion of Accabonac Road in East Hampton complained of a surge in truck traffic since the Long Island Rail Road trestle was raised there, the town board voted last Thursday to prohibit commercial vehicles weighing more than nine tons between Collins Avenue and Floyd Street. A public hearing on the proposed legislation was held on July 1.

The trestles on Accabonac Road and nearby North Main Street were raised after numerous incidents, spanning many years, in which trucks collided with them, sometimes getting stuck. The effect of the increased truck traffic, residents told the board in June, was a diminished quality of life, between the noise and the large vehicles' threat to the safety of pedestrians, joggers, cyclists, children, and pets. Some 80 residents had signed a letter to the board seeking the prohibition.

A similar recommendation was made by the East Hampton-Sag Harbor Citizens Advisory Committee in 2017, Councilman David Lys said in June, and Stephen Lynch, the highway superintendent, had made the same recommendation. Mr. Lys also noted that the road had recently been repaved and that weight limits would increase the useful life of the subsurface.

Only trucks making local deliveries are exempted from the prohibition.

There was previously no weight limit on town roads except on Indian Wells Highway in Amagansett, from 175 feet south of Bluff Road to its terminus at the ocean beach. There, commercial vehicles over four tons or 30 feet in length, or carrying more than eight passengers are prohibited. Several years ago, residents who frequent Indian Wells Beach complained to the board and at meetings of the Amagansett Citizens Advisory Committee about an out-of-control party atmosphere there, with large groups arriving by bus and taxi, taking kegs and cases of beer to the beach, and leaving the garbage bins overflowing.

A town board move to install a gatehouse on Indian Wells Highway landward of the parking lot, with an attendant checking for resident parking permits, and a vehicle turnaround also improved conditions there.

In other news from last Thursday's meeting, the board voted to reschedule an upcoming meeting from next Thursday to Sept. 23, as next Thursday is Yom Kippur.