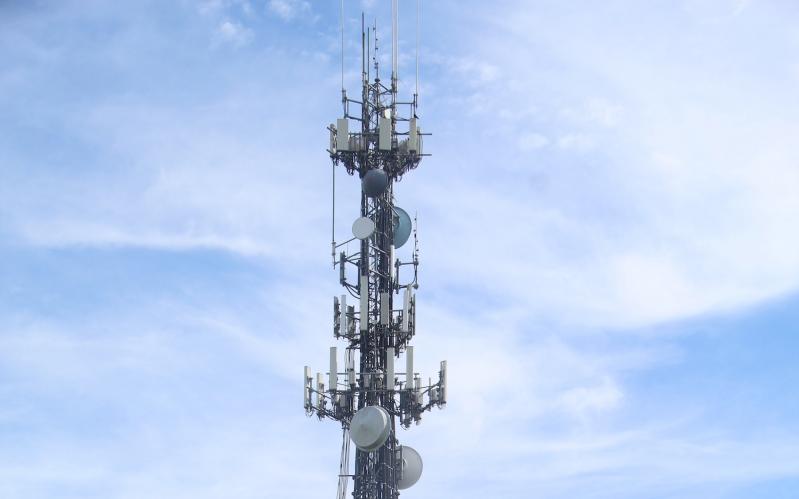 A communications tower behind East Hampton Town Hall offers some help, but over 75 percent of people who responded to a recent poll on wireless infrastructure here said cell service was generally bad.
Durell Godfrey
By Christopher Walsh

More than 75 percent of people who responded to a wireless infrastructure poll conducted in East Hampton Town last month described network coverage where they live as poor or nonexistent.

Questions about the quality of coverage were among 20 in a poll conducted between Aug. 5 and Aug. 25 to help draft a plan that will guide development of the town's wireless network. Representatives of CityScape Consultants, engaged by the town for that purpose, reported results of the poll, which was conducted in English and Spanish, during the town board's work session on Tuesday.

The poll follows a 2020 request for proposals for a consultant to analyze the existing network created by personal wireless carriers, assess needs, and recommend potential solutions.

Of 1,601 people responding to the poll, 917 described coverage where they lived as poor, with another 322 calling it nonexistent — taken together this represented 78 percent of those who answered the question.

Coverage was deemed acceptable by 189 respondents, good by 93 others, and excellent by 40. To a question of the quality of coverage when traveling in and around the town, 1,133 called it poor and 169 nonexistent, representing almost 82 percent of those who weighed in on the question. Coverage while traveling in the town was deemed acceptable by 217, good by 54, and excellent by 10. Of 1,107 people who answered a question as to coverage where they work within the town, 70 percent called it poor or nonexistent.

A little more than half of respondents live in Springs, where a parallel issue of concern — where to build a tower that would house both emergency and personal wireless communications infrastructure — remains unresolved. After a prolonged outcry from residents near a 6.9-acre wooded area that town officials identified as a potential location for a 185-foot pole, the town is in discussions with the Girl Scouts of Nassau County, which owns the 170-acre Camp Blue Bay in the hamlet, and American Tower, which holds the lease to an existing, smaller tower there, to place a pole on that property.

About a quarter of respondents lived in East Hampton, another 9 percent in Northwest Woods, 4 percent each in Amagansett and Montauk, and 2 percent each in Wainscott and Sag Harbor. A majority, 1,112, were year-round residents of the town, with 442 describing themselves as part-time residents. Eighty percent said that they relied "to a great extent" on their mobile device and its corresponding service, with another 13 percent agreeing somewhat with that description.

A large majority — 87 percent — said that excellent connectivity was more important than minimizing the visual impact of communications infrastructure. A small majority expressed "no serious safety concern" regarding wireless infrastructure, but 19 percent were concerned about possible health impacts. The same percentage expressed concern about impacts to the natural environment, and 9 percent were worried about the failure or collapse of a tower or pole.

While there has always been fear and confusion about wireless signals' effects on human health, almost half of respondents were unconcerned with the installation of 5G equipment, the fifth generation technology standard for cellular networks. But 19 percent were slightly concerned, 12 percent moderately concerned, and 10 percent very concerned. Another 10 percent said that they needed more information.

Susan Rabold of CityScape Consultants said that the telecommunications industry is moving to retire its first, second, and third generation networks by the end of next year. "People with wireless devices operating on a 3G or below platform will no longer be able to make or receive calls or use data on those wireless devices," she said. "The industry, by retiring that, opens up and expands their network to rely on 4G LTE, 5G, and beyond." The town, she said, cannot prohibit 5G because it uses existing infrastructure. Moving to prohibit 5G would be in violation of the Federal Communications Commission's telecommunic-ations standard, she said, which requires a municipality to allow equal access and continued deployment among wireless carriers.

The master plan will summarize what CityScape Consultants have done to date, Ms. Rabold said, and include a detailed explanation of existing infrastructure and coverage gaps. It will offer policy changes that will "harmonize what the industry is going to need in the future relative to the comments from the community," she said. In the final phase of crafting the master plan, the consultants will explain more about the evolution to 5G and its implications for the town, she said.