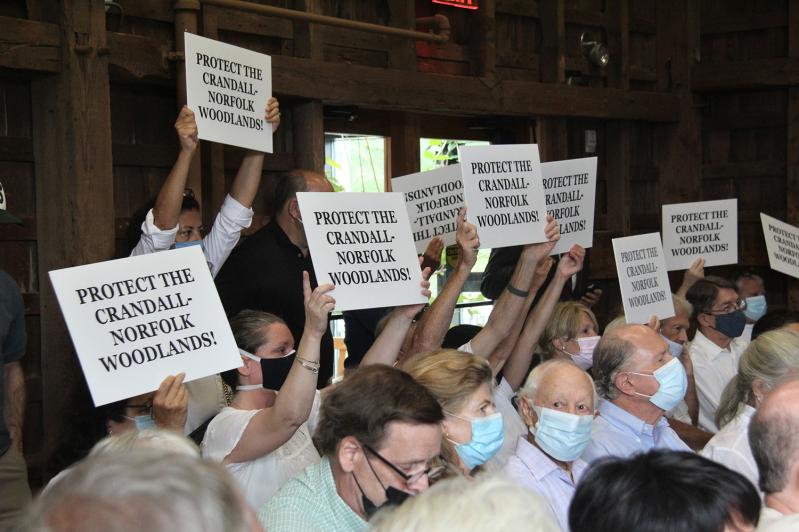 Springs residents who oppose a plan to site a 185-foot monopole in their neighborhood took their message to the East Hampton Town Board on Tuesday.
Durell Godfrey
By Christopher Walsh

A dozen or so Springs residents, along with the hamlet's board of fire commissioners and attorneys for various property owners, protested to the East Hampton Town Board Tuesday over its plan to site a 185-foot monopole for emergency and personal wireless communications in a residential area.

The town's upgrade of its emergency communications infrastructure is almost complete, with Springs the last hamlet to have a site for a tower finalized. The board recently announced a plan for a 100-foot "cell on wheels," telecommunications equipment mounted on a truck known as a COW, to provide communications on a temporary basis while a permanent 185-foot monopole is designed and constructed.

According to the board, a 100-foot-by-100-foot area of the 6.9-acre wooded area bounded by Crandall Street, Lincoln Avenue, Norfolk Street, and Fort Pond Boulevard would be cleared to accommodate the temporary and permanent towers, along with ancillary structures and equipment, and an access road to the site would be constructed. Since learning of the plan, residents have loudly complained, citing health hazards, the danger of equipment falling from the monopole, and the impact on their property values.

On Tuesday, and during previous discussions with and without the board, some people have suggested that the board's plan amounted to racism, pointing to the sizable immigrant community in Springs. At the conclusion of Tuesday's meeting, two of the four board members present took exception to the suggestion, prompting more exchanges and an accusation of "white fragility," defined as a white person's defensiveness when challenged about racial inequality and injustice.

Carl Irace, representing the fire district's board of commissioners, read a letter sent to the town board on Monday. "Please use our site," Mr. Irace said on behalf of the commissioners, to long applause from the Town Hall meeting room, referring to a 150-foot-tall tower at the firehouse, built in 2015 without site plan approval from the planning board. Its building permit was revoked by the town's zoning board of appeals, and when the fire district sued to overturn the Z.B.A. action, a State Supreme Court judge dismissed the suit. That tower still stands and houses fire district communications equipment, but board members say it cannot be used, citing the court's decision.

Specifically, said Mr. Irace, the commissioners seek the board's approval to install a COW or any other temporary equipment at any suitable location at the firehouse, provided it does not interfere with communications equipment on the existing tower. That could be accomplished quickly, he said, alleviating poor cellphone reception in the hamlet.

Dianne K. LeVerrier, representing residents of the wooded area that would be affected, said that the board cannot call its proposal an "emergency," given "it has been studying this emergency since 2017. There is a need, not an emergency." A July 7 environmental assessment finding that no significant adverse environmental impact would result from the project "is flawed from the outset," she said, as some board members haven't seen it in its entirety and it includes "several misrepresentations as to environmental impact."

Under the New York State Environmental Quality Review Act, she said, significant adverse impacts include removal or destruction of large quantities of vegetation or fauna, creation of a health hazard, impairment of the character or aesthetic resources of the neighborhood, and substantial change in the use of open space or recreational resources, much of which, she said, the board has overlooked.

Richard Burns, the former superintendent of the East Hampton School District, recalled his experience when the district was seeking a site for a bus depot. Its first proposal "made perfect sense to the school board and administrative team," he said. "The planning and momentum were aligned and all moving in the right direction. . . . Who could argue against such a well-thought-out plan that met all the requirements?"

In fact, however, "many members of the community were vehemently against such a proposal," he continued. "We went back to the drawing board and found another solution," one that met widespread approval.

"Please follow the path the East Hampton School District chose," he told the board. "Listen to your community and figure out a new solution that is acceptable for all concerned citizens of Springs."

More than one speaker referred to the sizable immigrant community in Springs. Margaret Garsetti likened the board's plan for the monopole to the debate over the future of East Hampton Airport, another topic of Tuesday's meeting. That, she said, "seemed to be consistent with this board pandering to a more affluent and influential community." The area in which the monopole would be sited "is clearly an area of middle-class people, but mostly it's an area of our immigrant community," she said. "I feel that this is such an in-your-face discrimination and egregious racism, and I want it noted for the record."

Later, Councilman David Lys, whose father immigrated to the U.S. from Indonesia, angrily countered that board decisions are not made based on residents' ethnicity. "To be called a racist right now offends me," he said. "I'm sorry to hear that today." Councilwoman Sylvia Overby likewise said that she was "very hurt by a lot of the conversation that went on today. I've worked really hard for my community, I love my community. To hear some of the hate speech that was said today is harmful."

Councilman Jeff Bragman defended the speakers, remarking that "sometimes people get a little emotional, sometimes do make accusations." The term "environmental racism" is a valid consideration, he said, and was likely the speaker's intent. His colleagues, noting that that phrase was not used, were unmoved. "To be called an egregious racist, yes, is something that offends me," Mr. Lys said. The board, Ms. Overby said, was being accused of "targeting an immigrant community and we're doing it as racists."

That, in turn, prompted Theresa Collins to advise board members to "look up the phrase 'white fragility,' because your temper today is classic. . . . Thank you for a classic study in systemic bias."

Deliberations on the siting of a monopole in Springs will continue at a future work session.