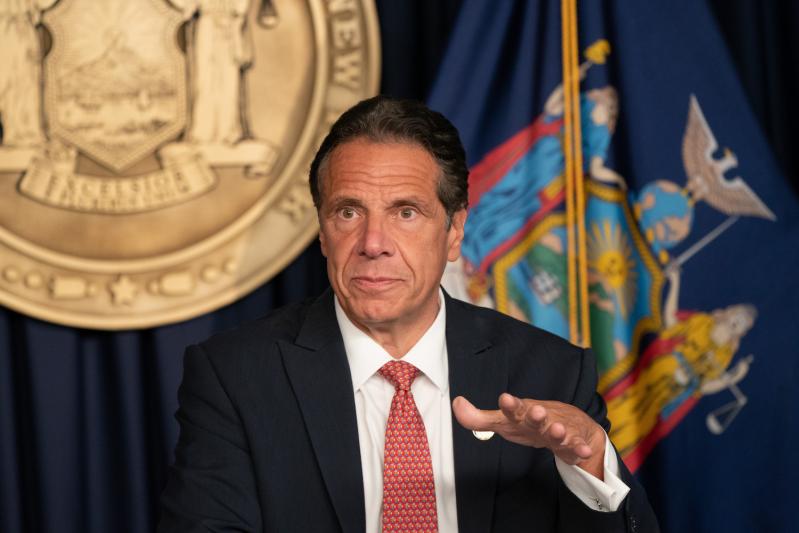 Gov. Andrew M. Cuomo, speaking on July 28, has come under pressure from all quarters to resign following the state attorney general's release of a damning report on sexual harassment allegations against him.
Mike Groll/Office of Governor Andrew M. Cuomo
By Carissa Katz

While he continued to maintain that he had done nothing wrong, an increasingly beleaguered Gov. Andrew M. Cuomo faced calls for his resignation from lawmakers at all levels, including the president, after State Attorney General Letitia James announced Tuesday that an independent investigation had concluded that he had "sexually harassed current and former state employees in violation of both federal and state laws."

Since February, multiple current and former female state employees had come forward to accuse the governor of inappropriate touching and offensive comments of a sexual nature "that created a hostile work environment for women," according to a report from the independent investigators.

"Our investigation revealed that the governor's sexually harassing behavior was not limited to members of his own staff, but extended to other state employees, including a state trooper on his protective detail and members of the public," the investigators wrote, describing the culture in the executive chamber as "one filled with fear and intimidation, while at the same time normalizing the governor's frequent flirtations and gender-based comments."

The State Assembly launched an impeachment investigation into the governor's conduct in March, looking at both the sexual harassment allegations and his handling of nursing home deaths during the pandemic, though he has since come under scrutiny for a cascade of other issues.

On Tuesday, Assemblyman Fred W. Thiele Jr. and State Senator Anthony Palumbo renewed their calls for the governor's resignation, joining the Democratic Senate leader, Andrea Stewart-Collins, and Assembly Speaker Carl E. Heastie, all of whom have been urging Governor Cuomo to step down since March. Even lawmakers who had declined to do so earlier, on Tuesday joined the chorus of those calling for him to leave office, among them President Joseph R. Biden and House Speaker Nancy Pelosi. New York's entire Democratic congressional delegation has called for his resignation.

He is also facing a criminal investigation in Albany County.

Suffolk County Legislator Bridget Fleming, a Democrat representing the South Fork, said on Twitter Tuesday, "It's time for the governor to resign."

"As a former sex crimes prosecutor, I applaud the many women who have had the courage to talk about their experiences, and the attorney general for listening and giving them a voice," Ms. Fleming wrote.

"The findings of the report are clear," Mr. Thiele, a member of the Independence Party, said in a statement issued on Tuesday afternoon. "The harrowing details depicted in the report confirm that Gov. Andrew Cuomo sexually harassed current and former state employees and created a hostile work environment." The governor, he said, "has made evident that he has no intentions of resigning," and "therefore, the Assembly must move with all deliberate speed to begin impeachment hearings."

"If the governor, driven by his arrogance and hubris, refuses to resign, then the Assembly Democratic Conference must take immediate action and begin impeachment proceedings," Senator Palumbo, a Republican, said in a statement of his own on the matter. The report, Senator Palumbo added, "makes it clear that he is no longer fit to serve the people of New York as its top executive."

In a statement released after the attorney general's press conference on Tuesday, Rita M. Glavin, an attorney for the governor, claimed that "the investigators have directed an utterly biased investigation and willfully ignored evidence inconsistent with the narrative they have sought to weave from the outset. In coming to their conclusion, they ignored the governor's testimony and substantial corroborating evidence, and were not candid about that fact at a press conference during which they announced their findings."

"The governor has spent almost all of his adult life in the public eye," Ms. Glavin wrote in her response to Ms. James's report. "The sudden allegations of sexual harassment over the last number of months -- allegations never made before about him -- have been stunning to him because he has never conducted himself in that way."

While the governor has long seemed unbowed by the allegations, the findings announced on Tuesday would seem to deal a fatal blow to his political aspirations.

He served in President Bill Clinton's cabinet as secretary of Housing and Urban Development, was New York's attorney general before running for governor, and last year was elected chairman of the National Governors Association. He was widely expected to seek higher office, but has said he planned to run for a fourth term as New York governor in 2022. The presumptive Republican nominee is Representative Lee Zeldin of New York's First Congressional District, which includes the five East End towns, Brookhaven Town, and parts of Smithtown.

"We must hold Governor Cuomo and every single person who has enabled him accountable at the ballot box on Election Day 2022," Mr. Zeldin said in an email to supporters on Tuesday, pointing to the nursing home inquiry, the sexual harassment allegations, and the governor's "absurd $5.1 million self-congratulatory book deal" for a memoir about his pandemic response.

Should the Assembly's inquiry lead to a trial and conviction in the State Senate, Lt. Gov. Kathy Hochul would become New York's governor. "She would also serve as acting governor during an impeachment trial," according to The New York Times. Ms. Hochul has indicated she would run to keep the seat in 2022.