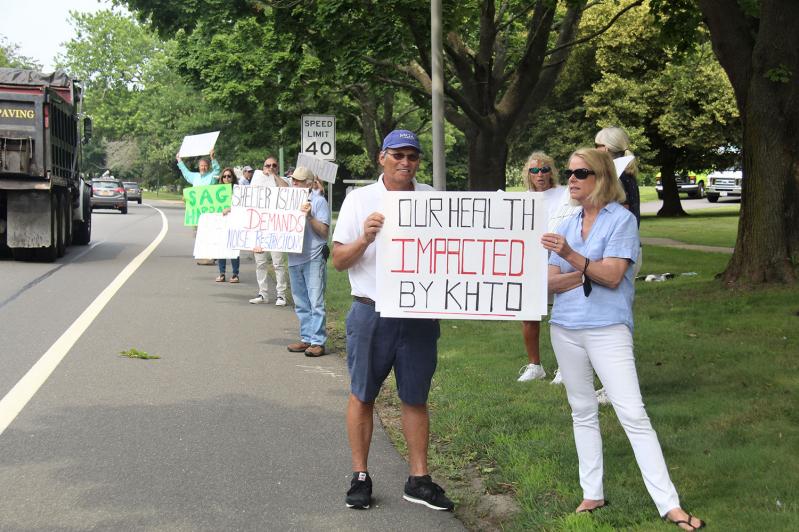 On Tuesday people from across the South and North Forks denounced the noise and pollution from air traffic to and from East Hampton Airport.
Durell Godfrey Photos
By Christopher Walsh

A capacity crowd filled the meeting room at East Hampton Town Hall on Tuesday for a discussion on the future of the East Hampton Airport.

In this closer-to-normal summer than during pandemic-impacted 2020, many residents are pleading with the town board to close the airport or severely restrict flights when Federal Aviation Administration grant assurances expire in September. More than 40 people spoke on Tuesday, either in person or by phone, more of them in favor of closure or restricted operations, but a sizable minority urged the town not to take such action.

Many speakers cited the incessant noise of jets and helicopters overhead on their path to or from the airport and its impact on their quality of life, property values, and physical and mental health. Many also cited the environmental impact of aircraft traffic to and from KHTO, the airport's aviation designation, and noted that the town's goal of achieving all of its energy needs through renewable sources by 2030. The continued existence of an airport and the heavy jet and helicopter traffic that come with it are incompatible with that goal, they said, as well as with the town's declaration, earlier this year, of a climate emergency.

The other group, which included Mark Woolley, district director for Representative Lee Zeldin, cited the airport's importance to medevac and other emergency operations as well as its positive economic impact. The town, said Mr. Woolley, reading a letter on the congressman's behalf, should not pursue "needlessly harsh measures" such as closing the airport.

Seen through the lens of the widening chasm between the rich and everyone else, and even between the rich and the super-rich, the arguments that played out on Tuesday were reminiscent of the Occupy Wall Street movement of a decade ago, in which the self-declared "99 percent" denounced the tiny remainder that amassed an ever-greater share of wealth. The 1 percent likewise are responsible for a disproportionate carbon footprint.

"Where we live now," said a Water Mill resident, "it's inappropriate to have aircraft that's a detriment to the over 99 percent of people who live here." A Noyac resident told the board that flight paths "seem completely redlined to hit us in less-wealthy areas." It has "destroyed quality of life" and is "killing the planet," she said. "It's time to end the misery."

Fewer than 1 percent of visitors to East Hampton arrive by air, a consultant told the board during a discussion of the airport in May.

The environmental dichotomy was described in a report from another consultant as to the environmental impact of aircraft. Don Wuebbles, professor of atmospheric science at the University of Illinois, told the board that the airport contributes almost 6 percent of the town's overall greenhouse gas emissions, or around 19,000 of 330,000 metric tons annually. This, he said, represents "a meaningful but small contribution to total carbon dioxide and air quality emissions relative to the emissions from the community itself." Of those 19,000 metric tons, almost 60 percent are emitted in the summer months, he said.

As the town becomes more energy efficient and transitions to alternative energy sources, "the airport will likely contribute a larger fraction of the overall emissions," Mr. Wuebbles said. "While the F.A.A. continues to do research on a switch to biofuels for aircraft, it may be some time before that becomes the case for helicopters and general aviation." The emissions reduction from closure of the airport "would be a savings to the local community," he said, though the overall reduction "is unknown without a traffic diversion study." The noise reduction resulting from the airport's closure would be significant, he said.

The messaging started before the 11 a.m. meeting: An hour earlier, a group of about 15 stood along Pantigo Road outside Town Hall holding signs bearing their town or hamlet of residence and messages including "Quiet" and "You ruin our summer."

"I'm here," Amy Turner of Wainscott said outside Town Hall, "because for decades, the helicopter noise where we are is not only deafening -- deafening -- and ruining any chance of being outside Thursday through Tuesday, but I'm also really worried about safety." Helicopters fly so low that "we're headed for some kind of disaster," she said. She also spoke of the airport's environmental impact. "The town board has an incredible opportunity to make a decision to serve the greatest good instead of the very few privileged people, and I hope they take that opportunity and continue the tradition of East Hampton government that's taken stands on preservation and supporting the public."

That hope was echoed inside. "If East Hampton is really trying to go green," said John Cullen of Riverhead, "it will be very hard having an airport that pollutes all five East End towns, and west to New York City, for 1 percent of people coming to East Hampton."

"You are in a unique position to do something about it," Patrick Sullivan of Sagaponack told the board about climate change. When he bought his house 25 years ago, aircraft noise "wasn't even noticeable," he said, and it is now constant. The South Fork, he said, "will bear the brunt of the climate crisis" with rising sea level and extreme weather.

He envisioned a press conference at which the town board announced the airport's closure. "It won't be just The Star reporting it," he said, "it will be every newspaper and TV station in the world: Some Americans said, 'We're going to do everything we can to stop the climate crisis.' "

Southampton Town Councilman Tommy John Schiavoni thanked the board for its diligence with respect to the airport, and said that Southampton has asked the Eastern Region Helicopter Council to discontinue use of the "November" route, used for arrivals to the airport from the southern shore helicopter route, given the airport's impact on his town's residents. Southampton has also asked pilots using the "Sierra" route, used for departures to the southern shore helicopter route, fly farther offshore and at higher altitude.

But others were equally strident in their insistence that the airport remain as-is. The Blade "urban air mobility platform," according to its website, which offers helicopter and seaplane flights between Manhattan and the South Fork, is "a great service," said one resident of Amagansett and Manhattan. "It makes my life easier." An East Hampton resident said that the number of jobs that would be affected by closing the airport was "monumental" and that complainants who bought houses "notwithstanding the fact that the airport has been there" is "bordering on outrageous." Like electric cars, electric aircraft are coming, and soon, many said.

Others echoed the concern that the airport would be essential in emergency response. But "no one here has complained about a medical helicopter that interrupted their barbecue," said Lyle Greenfield of Amagansett. "That's not the point." He was one of several who likened the airport to LaGuardia and Kennedy Airports in Queens. A "minuscule amount of people are benefiting" from East Hampton Airport, he said, while "a very large number" of others are "being damaged, hurt, assailed by the helicopter and jet traffic in particular." The airport is "counterintuitive" with respect to "what we're trying to do environmentally," he said.

Several Montauk residents worried aloud that closing the airport would only transfer the problem to a small, private airport near the end of East Lake Drive in that hamlet. "We're well aware of that," Supervisor Peter Van Scoyoc told one. Solving a problem in one area to the detriment of another "is no solution at all," he said.

The town could keep the airport open for emergency use, said Scott Bluedorn of East Hampton, but repurpose much of its acreage to include a solar farm, agriculture, affordable housing, and passive recreation.

After close to four hours and with some 20 callers still waiting to comment, Mr. Van Scoyoc ended the discussion. "These are difficult questions we all grapple with," he said, "in trying to find what's best for the community."