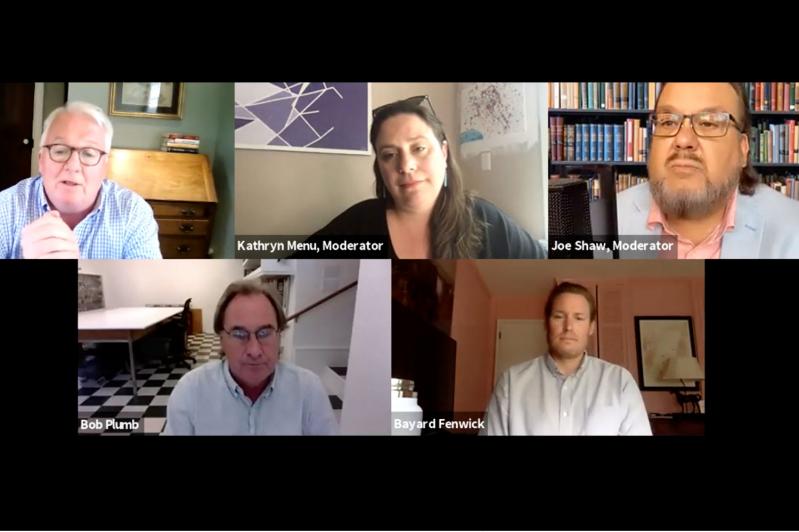 The three candidates running for two open Sag Harbor Village Board seats on Tuesday shared their visions for the new Bay Street Theater complex and offered plans to improve water quality, rein in development, increase access to parking, and reduce traffic congestion in a debate on Friday.

The candidates are Bayard Fenwick, a real estate agent and an assistant captain with the Sag Harbor Fire Department, who would be a newcomer to the board; and two incumbents, Bob Plumb, who is seeking a second term, and Aidan Corish, who is running for a third and final term.

The debate, sponsored by The Express News Group, the John Jermain Memorial Library, and the Save Sag Harbor citizens group, was held virtually, with the candidates in separate locations.

All three supported Bay Street Theater's plan to build a new home on the West Water Street Shops property it purchased last fall, but thought the initial design for the complex needed to be reworked and scaled back.

"I think it's a killer location, and it would be great to have Bay Street there, but at the moment, the design isn't in keeping with our village," said Mr. Fenwick, who recommended that a panel of local architects and people knowledgeable about historic preservation collaborate on a more appropriate structure.

Mr. Plumb called the initial design "over the top." If the new waterfront zoning code the village board has been developing is adopted, he noted, the theater would be required to decrease the size of the complex. "Only about 60 percent of the parcel could be used for a building, leaving the rest for waterview access, and potentially parking, because they cannot put something up there without addressing parking," he said.

Mr. Corish said the village's "stringent" code, and the zoning board of appeals, the planning and historic preservation board, the architectural review board, and the village's harbor committee would all have a say, ultimately, in determining the proper size of the building. "I have every faith in our boards' ability to be able to deliver the kind of building and environment that we want," he said.

Mr. Corish and Mr. Plumb touted the proposed waterfront zoning code as a necessary tool for preventing other overlarge structures from being built. Referring to the 2 West Water Street condos developed by Jay Bialsky, Mr. Corish said, "If we had the . . . code in place, the Bialsky buildings wouldn't be 44 feet [high], they'd be 25 feet."

Mr. Fenwick said he didn't know enough about the details of the proposed code to offer an opinion. "That's going to be on my learning list," he said. "I'm a quick study."

To address traffic congestion and a chronic lack of parking, all the candidates agreed that the village needs to hire experts to conduct a village-wide traffic and parking study. Mr. Plumb and Mr. Corish said they would be in favor of creating more parking spaces on the periphery of the village, and offering shuttles into the commercial district.

"We're at a traffic crisis in Sag Harbor," said Mr. Fenwick, who criticized the village for not cracking down on large commercial trucks for using small village streets. "The weight limits for village streets are not being enforced," he said. "Commercial trucks should not be able to cut through the middle of our village at peak traffic times."

The village recently started charging for parking in the Long Wharf lot, and Mr. Fenwick criticized the village board for including residents among those paying. Mr. Plumb and Mr. Corish emphasized the benefits of developing a new income stream that can help pay for needed infrastructure repairs.

On the subject of improving water quality, all the candidates agreed that the village should focus on homeowners, urging them to install nitrogen-reducing septic systems; and that a large bioswale is needed at Havens Beach to help prevent pollutants from reaching the water. Mr. Corish said the village should also create more dry wells "upstream" to catch stormwater before it flows to the beach, and Mr. Fenwick said homeowners should be encouraged to use less fertilizer on their properties.