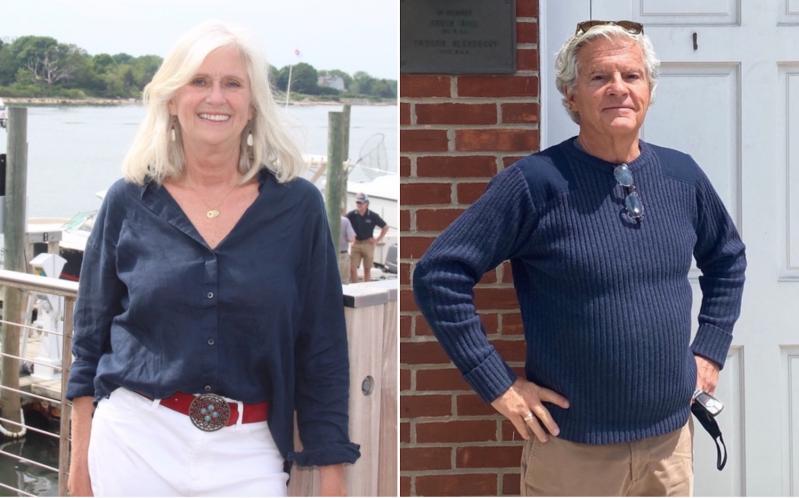 Sag Harbor Village Mayor Kathleen Mulcahy, who is running for a second term in Tuesday's election, and James Larocca, a trustee making his first mayoral bid, offered starkly different opinions on paid parking, a proposed waterfront zoning code, and the most suitable location for Bay Street Theater's new home in a contentious debate on Friday.

"I am breaking a promise to myself that I was never going to run for mayor, because in the last couple years I've become deeply, mortally worried about the condition of our small government and this community that we all love and serve," said Mr. Larocca in an opening statement.

Ms. Mulcahy said she stands by her record of the past two years, citing the creation of an environmental committee, the development of a sewer expansion plan and the waterfront zoning code, and the introduction of paid parking in the Long Wharf lot as a means of generating needed money for infrastructure repair. "Given that 15 of the 24 months were in a pandemic, I'm very proud of the accomplishments . . . and the path that this village is taking," she said.

The new zoning code is "our fastest, most immediate, and best answer to the overdevelopment on the waterfront," she said, adding that if it is adopted, no more private residences like the ones Jay Bialsky, a real estate developer, has built at 2 West Water Street will be permitted, and all structures will be required to provide visual access to the water.

Mr. Larocca said there were some good aspects of the proposed code, but criticized it for being too narrowly focused on waterfront properties nearest to the commercial district. He also questioned whether the language of the proposed code is clear enough to be effective. "I'm not confident the viewsheds would be protected," he said.

Ms. Mulcahy argued that the code is focused on the waterfront areas that are currently most vulnerable to redevelopment, and its regulations offer no wiggle room. "This is a bulletproof code," she said.

If he is elected, Mr. Larocca said, he will immediately start developing a comprehensive plan that will, in addition to laying out new village-wide zoning regulations, provide a road map to accomplish long-term goals such as increased access to parking and the creation of work-force housing. Ms. Mulcahy, who had made a similar pledge during her first campaign, said she did not regret not following through on it because the village already has a long-term planning document, the Local Waterfront Revitalization Program, that is now being updated.

Mr. Larocca said he objects to the village's paid-parking initiative because "it allows people with more disposable income to park more freely than those with less." To create more parking, he would opt for "spray-can solutions;" that is, reconfiguring the lots to provide more spaces.

Addressing Bay Street Theater's plans, Ms. Mulcahy said she supported the theater's right to build on the site of the West Water Street Shops building "and, with the waterfront zoning plan, we can get it to the size and scale that it needs to be."

Mr. Larocca disagreed. "I don't think a large new building like that should be on the waterfront, especially when there are sites nearby that are viable," he said. The theater has been awarded a lease to a parcel fsrther south that is owned by National Grid and used as a municipal parking lot. That would be a more suitable site for the new theater, Mr. Larocca said.

Ms. Mulcahy noted that National Grid would not allow large structures to be built on the parcel because it is a former Superfund site that requires ongoing environmental testing. Mr. Larocca said he would still like to explore that option. "We should have an independent appraisal of what you can do on the property," he said.

The candidates agreed that the village needs to hire an expert to conduct a traffic and parking study to find ways to reduce congestion and provide more access to parking, and they are both in favor of giving homeowners more leeway to rent accessory buildings for year-round work-force housing. Mr. Larocca, who was a founder of the Long Island Housing Partnership, an organization that provides affordable housing opportunities, said he would enlist its help to develop a plan for the village.

To improve water quality, both said they would urge owners of waterfront properties to install nitrogen-reducing septic systems, and offered strategies for reducing the amount of pollutants that end up in the bay via stormwater runoff. Mr. Larocca said he would restrict the chemicals homeowners can use on their lawns, and Ms. Mulcahy suggested banning the installation of impervious blacktop in residential driveways, walkways, and other surfaces as a way to cut down on stormwater runoff.

On Election Day: The polling place at the Sag Harbor Fire Department on Brick Kiln Road will be open from 6 a.m. to 9 p.m. on Tuesday. Monday is the last day to apply for an absentee ballot at the village clerk's office and the ballot must be personally delivered to that office no later than 9 p.m. on Election Day.