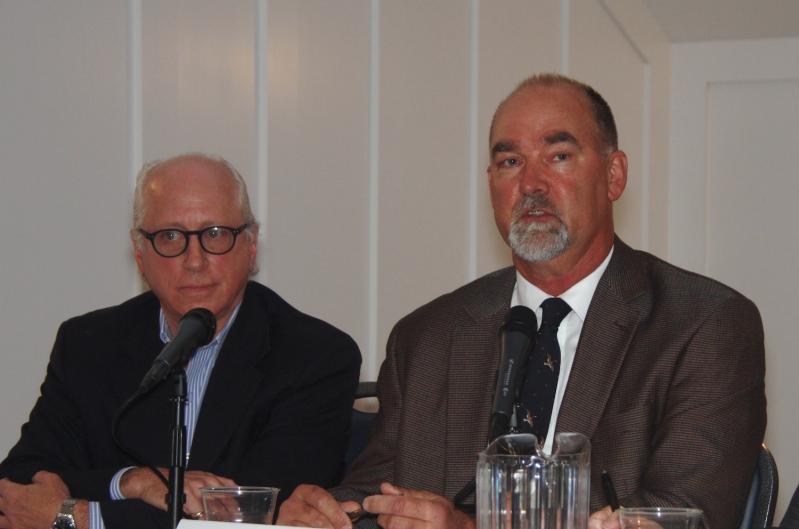 Jeff Bragman, left, and Peter Van Scoyoc when they were running mates in 2017. Now Mr. Bragman, a councilman, is challenging Mr. Van Scoyoc for the Democratic nomination for town supervisor.
Durell Godfrey
By Christopher Walsh

East Hampton Town Supervisor Peter Van Scoyoc and Councilman Jeff Bragman, who is challenging him in a Democratic Party primary on June 22, argued at length about the since-vacated 2019 settlement with the owner of Duryea's in Montauk during a debate on Saturday sponsored by the East Hampton Group for Good Government, Mr. Bragman charging the supervisor with "at best misjudgment, at worst improper conduct" in the matter.

The supervisor candidates, as well as the three Democratic candidates for two seats on the town board, met virtually on Saturday as well as last Thursday, the latter debate sponsored by the League of Women Voters of the Hamptons, Shelter Island, and North Fork.

Mr. Bragman held a press conference on May 25 to make the case that Mr. Van Scoyoc had held a February 2018 "secret meeting" with Marc Rowan, a billionaire co-founder of Apollo Global ManagementÊwho bought Duryea's Lobster Deck in 2014, to discuss settlement of long-running disputes over changes Mr. Rowan wanted to make to the property and its operations. He accused the supervisor of a "back-room deal" to have Mr. Rowan sue the town, providing Mr. Van Scoyoc political cover and creating a path to settlement of the matter.

Mr. Van Scoyoc dismissed Mr. Bragman's claims, accusing him of "cherry-picking the facts" and mischaracterizing events. "I think it's emblematic of what someone does . . . when they run a campaign and they don't really have a solid record of performance," he said.

Mr. Bragman likened that comment to one the supervisor made a year after the meeting, after the settlement, which had been signed only by the then-town attorney, was brought to light. During a February 2019 town board meeting, Mr. Van Scoyoc suggested that Mr. Bragman had not worked as hard on the issue as his colleagues did.

"This is not the first time that my opponent has accused me of not working or of being inexperienced," Mr. Bragman said. "He did it when I blew the whistle on the Duryea deal. His comments were vituperative and they were designed to discredit me." (The settlement had in fact been brought to the public's attention by a Springs resident.)

Mr. Van Scoyoc backtracked on his 2019 accusation in a sworn deposition, a reversal Mr. Bragman seized upon. "What I would like to suggest is the reason that he felt he had to lie is, that is not the reaction of a person who is surprised by what happened in the Duryea deal, that is the reaction of someone who is trying to cover up what happened in the Duryea deal, which is, there was a secret meeting, there was an agenda in that meeting, there was a discussion of suing the town and settling the cases without contesting them." That, he said, was confirmed by a text message Mr. Lys sent to Mr. Rowan after the meeting, and by the events that followed, including three lawsuits brought by Mr. Rowan against the town, which were not contested. "That is exactly what the owner of Duryea's said the agreement was, in the meeting," Mr. Bragman said.

Neither Mr. Bragman nor two colleagues on the board knew of the February 2018 meeting, Mr. Bragman said, disclosure of which "explained many of the things that made us scratch our heads. Why weren't the lawsuits defended? And the worst part of it is that his at best misjudgment, at worst improper conduct, have cost the town $500,000 in legal fees that continue to be charged to get us out of the mess that he created."

In a rebuttal, Mr. Van Scoyoc said that he had attended a similar meeting with his predecessor, Mr. Rowan, and Mr. Rowan's attorney around one year earlier. "The message was the same on both visits," he said, "and I frankly believe that he came to me as the new supervisor thinking he could make headway. At that meeting -- and it's well disclosed and publicized -- I told Mr. Rowan that he had to follow the planning board process and site plan if he wanted to have any changes to his commercial properties."

The supervisor said that he had told Mr. Rowan that he would have to go through the planning board's procedures, specifically with respect to a patent Mr. Rowan believed eliminated the town's jurisdiction over a dock at the property.

"I said that's an issue that the town believes we're in the right, and we're not going to change our position unless ordered by the court. That's how Mr. Bragman characterizes a done deal, saying 'Go ahead and sue us.' " Three weeks later, "a billionaire sued the town. Big surprise, it happens all the time."

Legal fees arising from Mr. Rowan's lawsuits "are generated from trying to keep someone from just strong-arming the town into something that we didn't authorize," Mr. Van Scoyoc said. In fact, he said, in a February 2019 meeting he and Mr. Bragman "both agreed that outside counsel should be hired to try and overturn a settlement agreement that was not voted on by the town board or authorized by the town supervisor, which is necessary." A resolution to that end was passed the next day.

The candidates also clashed on the South Fork Wind farm, both at the League of Women Voters and Group for Good Government debates. Mr. Bragman has long complained that the proposed wind farm has not undergone adequate environmental review, and that the town should not have entered into a community host agreement with its developers prior to that review. At the League debate he said that he was "not enthusiastic about tearing up Beach Lane" in Wainscott, where the wind farm's export cable is to make landfall and travel underground to a Long Island Power Authority substation in East Hampton, and that "there are other ways to access wind power," such as community choice aggregation, or C.C.A. His advocacy for environmental review "is why we didn't accept the first offer the supervisor was urging me to accept, for $8 million. We got $29 million because we were looking at environmental review." Mr. Van Scoyoc said that was a mischaracterization.

The host community agreement is conditioned upon successful environmental review, Mr. Van Scoyoc said, and those of the New York State Public Service Commission and federal Bureau of Ocean Energy Management are both ongoing and far more rigorous than any town effort. There is "no grant of rights until that review is completed successfully and both agencies have signed off with certificates," he said. Mr. Bragman's accusation is "all about trying to mislead the public as to what really occurred," he said.

"There has never been a supervisor that has done more for East Hampton" on renewable energy, Mr. Van Scoyoc said at the G.G.G. debate, pointing to the megawatt-scale solar farm in East Hampton, the Solarize East Hampton program to incentivize rooftop solar for residential and commercial buildings, and the installation of LED lighting townwide, saving money and reducing greenhouse gas emissions.

Mr. Van Scoyoc said that an effort by some Wainscott residents to incorporate, which followed the town and town trustees' agreement with the wind farm's developers regarding the export cable's landfall site, points to "a lack of leadership" that the liaison to the hamlet's citizens advisory committee -- Mr. Bragman, until he was reassigned several months ago -- "brought for three years during the period we were negotiating" with the wind farm's developers.

Mr. Van Scoyoc charged his opponent with opposing the freestanding emergency room that Stony Brook Southampton Hospital plans for East Hampton. "I think he felt the tide turn and now will say he fully supports it," he said during the G.G.G. debate.

"I have been very consistent in my messaging about projects the town backs," Mr. Bragman responded. "That message is that all projects . . . should go through rigorous zoning and planning review."

Only registered Democrats can vote in the primary. Early voting starts on Saturday at the Windmill Village community room, 219 Accabonac Road in East Hampton and continues through Sunday, June 20. Hours are Saturdays and Sundays from 10 a.m. to 3 p.m., Monday from 7 a.m. to 3 p.m., Tuesday, noon to 8 p.m., Wednesday and next Thursday from 8 a.m. to 4 p.m., and Friday, June 18, from noon to 8 p.m. Voting takes place at regular polling places on Tuesday, June 22.