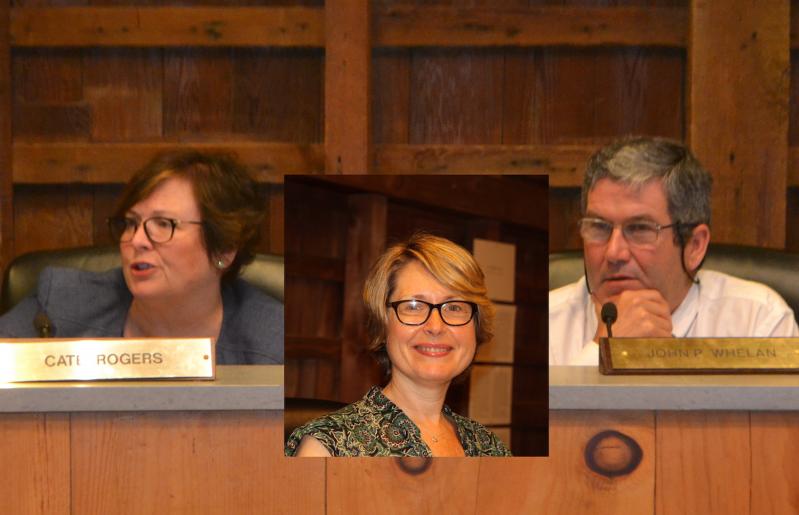 Cate Rogers, left, and John Whelan, right, served together on the East Hampton Town Zoning Board of Appeals and are now vying for the Democratic nomination for town board, along with Councilwoman Kathee Burke-Gonzalez, center.
T.E. McMorrow, Durell Godfrey
By Christopher Walsh

Councilwoman Kathee Burke-Gonzalez, who is seeking a third term; Cate Rogers, chairwoman of the East Hampton Democratic Committee, and John Whelan, chairman of the town's zoning board of appeals, appeared via video conference in last Thursday's debate sponsored by the League of Women Voters of the Hamptons, Shelter Island, and North Fork and an East Hampton Group for Good Government-sponsored debate on Saturday. Coverage of the supervisor debate appears elsewhere in today's paper.

The Democratic primary is on June 22, with early voting to begin on Saturday at Windmill Village in East Hampton. Only registered Democrats may vote in the primary.

The East Hampton Democratic Committee endorsed Ms. Burke-Gonzalez and Ms. Rogers at its nominating convention in February. Mr. Whelan sought but did not receive the committee's endorsement. The East Hampton Independence Party did endorse Mr. Whelan, however, and regardless of the primary outcome he will appear on that party's ballot line in the Nov. 2 general election.

"My job as a town board member is to enable the community to achieve its goals by getting facts and building consensus," Ms. Burke-Gonzalez, the only incumbent in the race, said at the League debate. The town's budget, she added, "is a reflection of what we value." She touted the town board's "swift action" in the early days of the pandemic, pointing to testing sites and vaccination clinics as well as the Human Services Department's vastly increased workload in delivering meals to homebound senior citizens.

"Service to my town always is a high priority," Ms. Rogers said at the League debate. She has served on several appointed and advisory boards and was trained by former Vice President Al Gore through the Climate Reality Project, which mobilizes activists to push for aggressive climate action. She is a member of Win With Wind, a group advocating for the South Fork Wind farm. Success in public office, she said, "comes from facilitating an informed community, finding consensus, and taking action."

At the same debate, Mr. Whelan said that he is "not running against anyone," rather, he is running "for the Town of East Hampton and for the trust of the voters so I may have a chance to use my lifelong experience" to serve the public. An architect, he previously served on the Suffolk County Planning Commission.

Asked why voters should choose them, Ms. Rogers spoke at the Group for Good Government debate of her "dig-deep research ethic" and "tremendous energy" as distinguishing qualities.

"This campaign has nothing to do with personalities," Mr. Whelan said at that debate. He will bring his "lifelong commitment" to the town and 30 years of experience in architecture, planning, zoning, and problem solving. "I enjoy collaborating with people," he said, and he believes "people know they can speak to me, get a solid opinion, and I can bring a new skill set to the board."

Ms. Burke-Gonzalez pointed to her nine years on the Springs School Board and eight on the town board. "I believe I have a proven record," she said. "I set the bar very high for myself."

Mr. Whelan quoted Maya Angelou at the League debate. "If you don't know where you've come from, you don't know where you're going," he said. East Hampton "was spectacular when I was growing up," and remains so thanks to "good planning and zoning." He spoke of curtailing development and emphasizing bicycle paths, open space and parkland, and affordable housing, the latter characterized by "sustainable design, maybe smaller, green houses." He also said that he would like to see "promoting jobs with sustainable design" as a way to promote trades including con-struction.

At the same debate, Ms. Burke-Gonzalez, who also trained under Mr. Gore, said that protecting the natural environment, delivering water quality improvement projects, and preserving open space with community preservation fund money are among the reasons voters should re-elect her, as well as advancing offshore wind. Climate change is "affecting us on so many levels," she said. These initiatives are "a big, heavy lift" but are "why we all live here, and we need to protect our natural environment."

Ms. Rogers, too, spoke of sustaining the character of the town and of cellular service, broadband infrastructure, and "doing everything we can to protect the town from climate change."

The way to protect open space, groundwater, wetlands, and beaches is to "continue to do what we are doing," Mr. Whelan said, "not allowing overdevelopment, continue to work with [innovative alternative septic] systems, continue to educate people as to the fragility of the environment." The town should "take the lead in LEED-certified buildings," he said, referring to the energy and environmental design rating system. "If we start as a town and lead, others will follow.