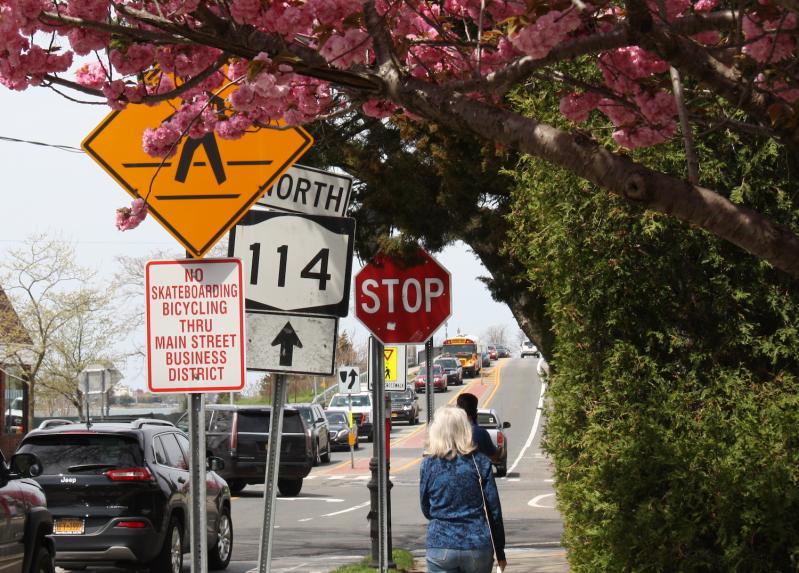 Things in Sag Harbor and downtowns across the state are about to get a whole lot busier, as the governor announced that many capacity restrictions for businesses will be eased as of May 19.
Durell Godfrey
By Christopher Walsh

Citing continuing downward trends in New York State’s Covid-19 infection and hospitalization rates and seven million of its residents being fully vaccinated, an upbeat Gov. Andrew M. Cuomo announced on Monday “a major reopening of the state” on May 19.

Speaking to the press in Manhattan, the governor announced that capacity restrictions will be lifted at spaces including offices, retail stores, food services, gyms and fitness centers, amusement parks and other family entertainment venues, hair salons, museums, and theaters. Instead of tying capacity to a percentage, it will as of May 19 be tied to the "space available for patrons . . . to maintain the required social distance of six feet," according to the governor's office. The same will be true for houses of worship.

Outdoor stadiums will go from 20 percent capacity to 33 percent on May 19, he said.

The reopening, which the governor called “a milestone in New York State,” will be coordinated with those in New Jersey and Connecticut.

The Metropolitan Transportation Authority will resume 24-hour service as of May 17, coinciding with the previously announced lifting of a midnight curfew on outdoor food and beverage service. New York City public transit at present is closed between 2 and 4 a.m. for disinfection.

The announcement followed a recitation of statistics including a 50-percent decline in the positive infection rate for Covid-19 over the last month, with Sunday’s statewide rate at 1.94 percent based on 113,139 test results. Suffolk's daily rate dipped to 1.7 percent for results reported on Sunday, the lowest since Nov. 5, and its seven-day average was 1.9 percent, the lowest since Nov. 7.

The rate of Covid-19-related hospitalization has also been “skiing down the mountain,” he said, with a 28-percent decline over the last month.

But the pandemic is not over, he said: 37 New Yorkers died of Covid-19 on Sunday, and variants, with understanding of their transmissibility and lethality still murky, remain a concern. The vaccination rate has also slowed, he said, and efforts to target and incentivize “the youthful and the doubtful” to be vaccinated are underway.

May 19 will mark a “moment of significant transition,” the governor said, after the pandemic forced an initial shutdown of most activity for months and battered the state and country in multiple waves. The state’s reopening “can be a moment for a New York renaissance,” he said, one that has to be cleaner, safer, fairer, and more economically competitive. The economy is tied to the crime rate, he said, and “the rate of crime, especially in New York City, is unsustainable.” He spoke of a need to “repair the relationship between the police and community,” which he said has yet to be fully resolved.

The governor also implored Senators Chuck Schumer and Kirsten Gillibrand, and members of New York’s House delegation including Jerrold Nadler, to work to repeal the 2017 cap imposed on state and local tax deductions, known as SALT, which he called “an attack” by the administration of former President Trump.

“And we’re going to lead the nation in the green economy, period,” the governor said, “because that is the future, and whoever gets there first wins. And we will learn from this Covid nightmare that took this country unprepared, and we’re going to have the best public health care system in the nation.”

In response to a question, he was defiant on calls for his resignation, following investigations into multiple accusations of sexual harassment and Covid-19 deaths in nursing homes. “I am not resigning, period,” he said.