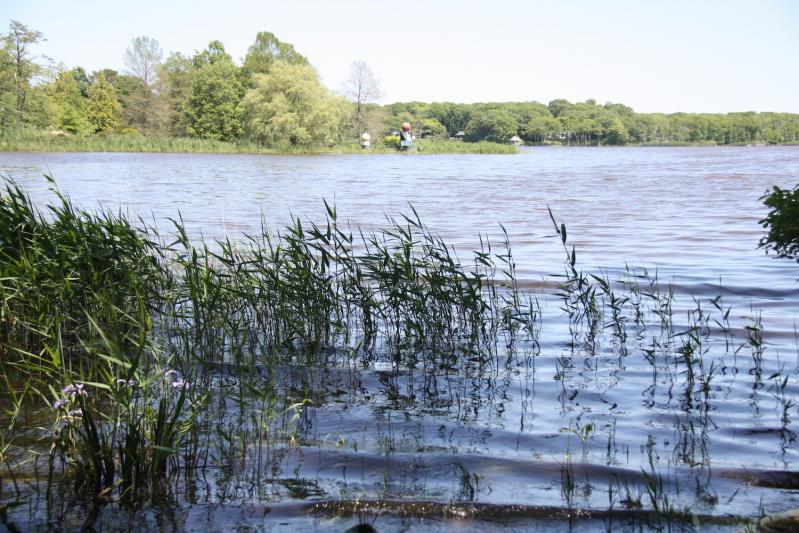 Georgica Pond is eutrophic, with excessive nitrogen inputs from ground and surface water runoff feeding dense plant life, whose decomposition is blamed for choking the pond of oxygen.
Durell Godfrey
By Christopher Walsh

The East Hampton Town Planning Department gave a qualified recommendation for the town board to approve the resumption of use of an aquatic weed harvester in Georgica Pond this year, a senior planner told the board on Tuesday.

Georgica Pond is eutrophic, with excessive nitrogen inputs from ground and surface water runoff feeding dense plant life, whose decomposition is blamed for choking the pond of oxygen. Blooms of macroalgae and macrophytes have resulted in hypoxia, or low levels of dissolved oxygen, which can result in fish kills and harmful algal blooms.

The weed harvester was used to remove macroalgae from the pond from 2016 through 2018 and on a limited basis last year, an effort to inhibit harmful algal blooms, including toxic cyanobacteria, or blue-green algae. The Friends of Georgica Pond Foundation, a group of pondfront property owners, operated the harvester in collaboration with the town trustees, who have jurisdiction over the waterway.

Use of the harvester requires a natural resources permit from the town, which prohibits motorized craft on the pond, and a tidal wetlands permit from the New York State Department of Environmental Conservation. The trustees approved its use in March. The zoning board of appeals also reviewed the project and recommended the harvester's return.

The foundation's members hope that the D.E.C. and town permits will be in hand by summer. The harvester is to be operated from June to September, between Monday and Friday for up to seven and a half hours per day. The foundation anticipates that the harvester will be required for the next five years.

Brian Frank told the board that the Planning Department has prepared a draft environmental impact statement for its consideration. All harmful algal blooms have one thing in common, he said: They are fueled by nutrient enrichment. Nitrogen and phosphorous, in particular, "unnaturally fuel the growth of plants, especially algae, to the point where it creates severe water quality problems."

Macroalgae create problems for water quality by interfering with surface water currents and shading desirable vegetation, Mr. Frank said. When they die, their decomposition consumes oxygen, stressing or killing marine life. "Decomposition also releases nitrogen and phosphorous bound up in plant material that can fuel the next algal bloom," he said. Removing the plant material is particularly helpful in lowering phosphorous levels in the pond. By doing so, "harmful algal blooms and ecological crisis" can be prevented, he said.

Target organisms are from the genus Cladophora, a genus of macroalgae, and sago pondweed. The harvester is operated to minimize bycatch and leave animals like snapping turtles and large fish unharmed.

There is a definite correlation between operation of the weed harvester and improved water quality, Mr. Frank told the board. However, he added, while it is understandable that the foundation and the trustees are enthusiastic about the positive impact of the weed harvester, "it's the Planning Department's opinion that this enthusiasm should be tempered with recognition that there's a lot we don't know about these systems in general." The Planning Department, he said, is "encouraging a little bit more collaboration, peer review, independent oversight to get a better handle on how the project can go forward and reap the benefits it's provided and ensure there aren't any adverse impacts that haven't been identified."

"Is your concern that the harvester may also be removing native vegetation that is beneficial?" Councilman Jeff Bragman asked.

"It is removing native vegetation that's beneficial," Mr. Frank said. "What we don't know is the impact of that. There are a number of unanswered questions." It is unclear, for example, if sago pondweed is contributing to nutrient enrichment that triggers algal blooms or what impact its removal has on wildlife. The harvester could operate for a shorter duration and still be effective, he said. "If you look objectively, there are still significant unanswered questions that should be approached with humility."

The harvester is part of a multifaceted remediation effort that includes reducing surface water runoff to Georgica Pond, including a rest stop and kayak launch on Montauk Highway near the East Hampton Village-Wainscott border, more ecologically sound property management such as discouraging lawn fertilizers and synthetic chemicals, planting natural buffers, and replacing aging septic systems within the two-year groundwater travel time in the pond's watershed. The new models dramatically reduce the nitrogen leaching. Around one-third of the approximately 75 properties around the pond have done so.