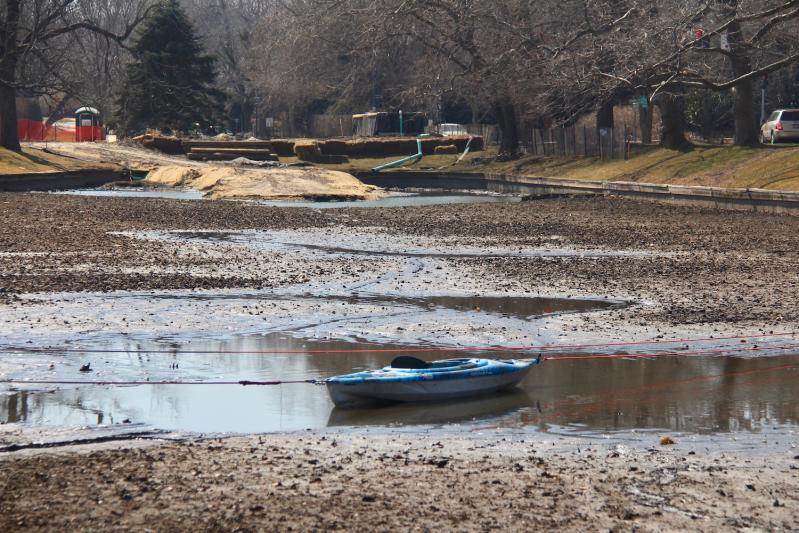 East Hampton Village is asking the town for $672,000 in community preservation fund money to complete the second phase of the dredging of Town Pond, which is already underway.
Durell Godfrey
By Christopher Walsh

Mellissa Winslow, a senior environmental analyst and coordinator for the committee, described to the board on Tuesday projects that she said were previously approved or are shovel-ready.

East Hampton Village is requesting $672,000 to complete the second phase of the dredging of Town Pond. The town awarded $191,500 last year for the first phase of the project, a pilot to ensure the feasibility of dredging the entire pond. The first phase, constituting about one-quarter of the overall plan, was deemed a success, Ms. Winslow said.

In the second phase, 7,000 to 10,000 cubic yards of sediment would be removed. The effort is meant to remove phosphorus, which binds to sediment. Dredging will also improve stormwater retention and treatment, important as Town Pond drains into Hook Pond, another impaired water body. The health of the former impacts that of the latter, Ms. Winslow said. Habitat and depth will be improved there and the water temperature decreased, among other benefits, she said.

Sag Harbor Village would like to install nine rain gardens in road rights of way on Hempstead Street, near Havens Beach and Sag Harbor Bay. Rain gardens are depressions where stormwater runoff collects and is naturally filtered by plants that capture nutrients, bacteria, and sediments as they grow, preventing their discharge into water bodies.

The project would prevent an estimated 17.4 pounds of nitrogen from entering the bay each year, Ms. Winslow said, roughly equivalent to what an innovative alternative septic system would do. The goal, she said, is for the village to hand off maintenance and monitoring of the rain gardens to adjacent property owners, through a sponsorship program, after two years.

The committee also recommended awarding the town trustees $34,570, the balance needed to purchase a new pumpout boat. The town awarded the trustees $48,570 toward a new boat last year, when boating surged amid the pandemic. That boat has been delivered and will operate this year. The trustees hope to replace an aging pumpout boat with a new one and operate a second boat in Lake Montauk to accommodate demand, along with the existing vessel they operate in Three Mile Harbor.

An initial plan to renovate the aging boat was scrapped, and it was instead sold for $14,000. The trustees received a $60,000 grant from the New York State Clean Vessel Assistance Program toward the purchase of a new boat, and seek the balance of the $108,570 price of a new boat from the town.

The discharge of sewage, treated or untreated, is prohibited in trustee waters. The entire Peconic Estuary is a designated no-discharge zone, and discharging raw sewage directly into waters within three miles of land is illegal under federal law. The trustees want to ensure their ability and capacity to prevent discharge into waterways, Ms. Winslow said.

"Having a second, fully functional boat, with a longer useful life, would be very useful," she said.

Last, the town's Aquaculture Department is proposing a sugar kelp grow-out program for the town, which would also provide a seed source for future kelp farmers. Kelp is a recent topic of discussion in the town as a complement to shellfish aquaculture, as kelp farming would occur in the winter and spring, opposite shellfish cultivation's summer and fall schedule.

Seaweed farming is a fast-growing aquaculture sector, and kelp, one of the fastest growing plants in the world, absorbs five times more carbon than most plants on land. It sequesters more carbon than eelgrass, mangroves, and salt marshes combined based on biomass. Seaweeds also extract nitrogen and phosphorus from the water and have multiple uses, including as food for human consumption, as animal feed, as fertilizer, and as biofuel.

The proposal is to create a sugar kelp hatchery at the existing shellfish hatchery in Montauk and install 100-foot lines of sugar kelp at two locations in Three Mile Harbor. That would expand to other areas in the harbor and possibly to Hog Creek in a second year, with pilot projects to be expanded further over time. The committee recommended $14,660 for equipment and other supplies needed to develop and implement the program.

A Reminder From PSEG About Digging
Petition to Speed Up Sand Replenishment in Montauk
Artistic Portraits of M.L.K. Up for Auction on Saturday
END_OF_DOCUMENT_TOKEN_TO_BE_REPLACED