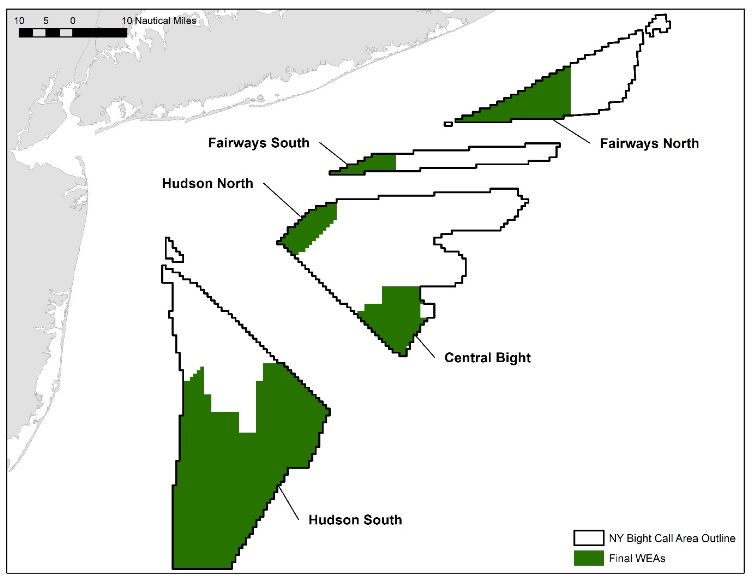 Two areas off the South Shore of Long Island that had been identified as potential federal lease areas for development of offshore wind will not be considered for leases, an official of the Bureau of Ocean Energy Management said last week.

The announcement came on April 14, during a BOEM-hosted virtual meeting of the Intergovernmental Renewable Energy Task Forces, comprising representatives from 14 coastal states, local governments, tribes, and federal agencies. A second meeting was held on Friday.

The areas in the New York Bight known as Fairways North and Fairways South, respectively 88,246 and 23,841 acres, "will not be considered for leases," said Luke Feinberg, a BOEM project coordinator. The Bight is in the waters between Long Island and the New Jersey coast.

Left unsaid at the meeting was the likely opposition to visible wind turbines by property owners on the South Fork, where real estate is among the most expensive in the country. But Doreen Harris, NYSERDA's president and chief executive, told Newsday that the state's opposition was due to the fairways' distance from the shore, as well as to fishing and maritime conflicts.

Meanwhile, the Responsible Offshore Development Alliance, a coalition of fishing industry associations, told the Intergovernmental Renewable Energy Task Forces that fishing interests would boycott last week's meetings. In a blistering letter, the group complained that its members have "urgently advocated for the survival of their family and communities, in a context where all the rules are set (and changed) by newcomers interested only in a large-scale ocean acquisition who often don't even treat them with common courtesy or basic respect."

There have been "effectively no accommodations to mitigate impacts" of wind farm development "or the supposedly unbiased federal and state governments," the letter says. Fishermen have "provided time, data, and knowledge to countless offshore wind deliberations, only to see that information misappropriated, discounted, distrusted, or simply disap-pear." BOEM's fast tracking of existing and future lease areas "without ever having addressed any of the reasonable, consistent concerns raised by fishermen and other environmentalists threatens the very survival of U.S. seafood production," RODA's letter says.