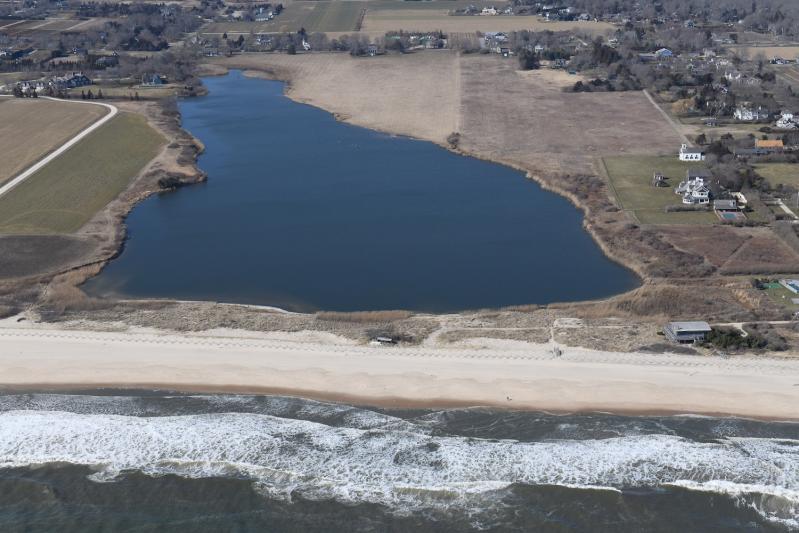 In 2020 not a single cyanobacteria measurement in Wainscott Pond was below the New York State Department of Environmental Conservation's high toxins warning level.
Doug Kuntz
By Christopher Walsh

Summer water temperatures are rising in East Hampton, stressing organisms including bivalves and seagrasses. Meanwhile, the water quality in Wainscott Pond is rapidly worsening, with 2020 measurements of a toxin "unlike anything we'd ever seen," the town trustees were told on Monday.

For the second time this month, Christopher Gobler of Stony Brook University's School of Marine and Atmospheric Sciences delivered a mostly bleak assessment of water quality amid an alarming inventory of manifestations of climate change on the South Fork. On April 1, he presented "State of the Bays, 2021," part of the university's lecture series. On Monday, it was his annual report to the trustees, for whom he conducts water quality sampling and analysis in multiple waterways under the trustees' jurisdiction, as well as Fort Pond in Montauk, which is not a trustee water body.

Winter and spring temperatures are "not changing much," Dr. Gobler said, but they are increasing during the summer and fall. "The trend for summer is strong," he said. This has been observed in multiple ecosystems across the East End. The phenomenon is one of several conditions that may, in combination, be responsible for the collapse of the bay scallop population in 2019 and last year.

As part of the presentation, a graph depicting measurements at multiple sites in Napeague Harbor, Accabonac Harbor, Three Mile Harbor, Hog Creek, and Northwest Creek showed the maximum temperatures at each above 25 degrees Celsius, or 77 degrees Fahrenheit. "That's really a level where you start to see ecosystems change," Dr. Gobler said. "Seagrasses need temperatures at 24 or below." If the temperature remains above that threshold for more than two weeks, "they're in trouble. We got above that threshold in every location at some point in 2020."

Cyanobacteria, toxic algae also known as blue-green algae, appeared and persisted in Fort Pond last summer, as they have in recent years. But "Wainscott Pond was a different situation," Dr. Gobler said, detailing a fast-deteriorating condition. Cyanobacteria were rarely measured at greater than 2 micrograms per liter in Wainscott Pond in 2019, he said, and then only at 4 and 8 mcg/L, the latter figure being the federal Environmental Protection Agency's recreational guideline.

"But 2020 gave new perspective on that," he said, with not a single measurement in Wainscott Pond below the New York State Department of Environmental Conservation's high toxins warning of 20 mcg/L. "Many of these measurements are in the hundreds," he said, pointing to September and October, with every sample from June to November exceeding the D.E.C. standard.

Perhaps more concerning, Dr. Gobler said, were the levels of the toxin microcystin that is produced by cyanobacteria. "The levels of toxin were unlike anything we'd ever seen in Wainscott Pond," he said. As of July 2020, "we were above 20 micrograms per liter for the rest of the year." He likened the change from 2016 to last year to going to "a whole other solar system."

Nitrogen levels, an excess of which is blamed for promoting the harmful algal blooms that can kill humans and marine life, exceed the Peconic Estuary standard for seagrass in most town waters, he said. Again, a graph depicted alarming statistics, with sites in Northwest Creek, Hog Creek, Three Mile Harbor, and Accabonac Harbor showing spikes and summer averages alike in excess of 0.4 milligrams per liter, the Peconic Estuary Program's standard for protecting seagrasses.

High levels of rust tide, which is promoted by excessive nitrogen levels, can kill marine life. It was measured in two of three locations sampled in Accabonac Harbor last year. Excessive nitrogen combined with warmer water means "we've warmed right into the ideal zone for this species," Dr. Gobler said of rust tide, with a bloom season many times longer than in the past. "These are the things that promote these rust tides, and these things are harmful to bivalves, and specifically to scallops."

"Nocturnal hypoxia," or low levels of dissolved oxygen at night, was observed not just in poorly flushed regions of Three Mile Harbor but also in Napeague Harbor, one of the least developed water bodies in the town. Tidal flushing may be less vigorous than in years past, Dr. Gobler said.

A lone bright spot came in statistics regarding Georgica Pond, where a yearslong effort, including replacement of septic systems with new nitrogen-reducing models and the use of an aquatic weed harvester to remove sources of nitrogen and phosphorus, has dramatically reduced cyanobacteria measurements since 2016.

"Thank you for a riveting report," Jim Grimes, a deputy clerk of the trustees, said at the conclusion. "It's kept us on the edge of our seat."