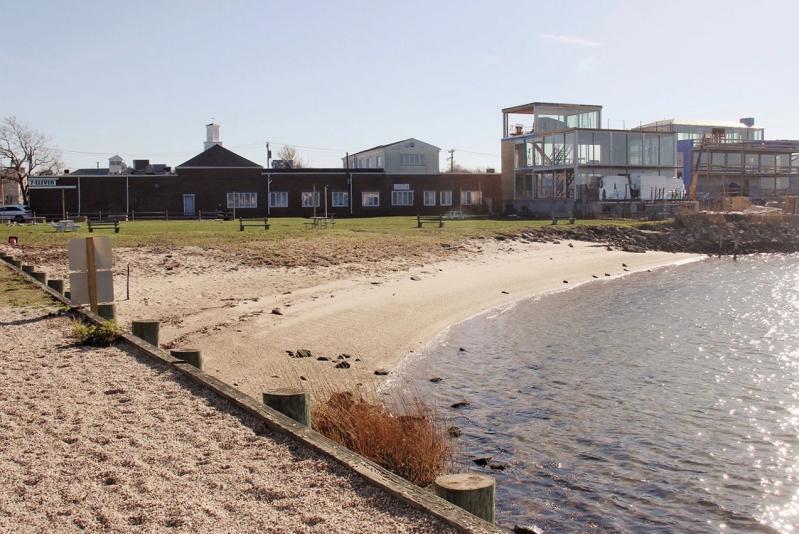 Bay Street Theate, which bought the West Water Street Shops property for its future home, is hoping to hold its summer theater season at Steinbeck Park, in the foreground.
Durell Godfrey
By Jamie Bufalino

A disagreement about safety has led to a standoff between the Bay Street Theater, which is seeking to hold its summer season in a tent in Steinbeck Park, and the Sag Harbor Village Board, which has thus far nixed the plan, citing concerns about noise, crowding, traffic flow, and other quality-of-life issues.

Starting Friday, theaters and other entertainment venues in New York State can reopen at 33 percent capacity, with up to 100 people allowed indoors and up to 200 outdoors. However, Bay Street's executive director told the board last week, Bay Street must adhere to Covid guidelines set by Broadway unions, and Actors Equity is not allowing its members to work indoors this summer. The only way for the theater to have a summer season this year, Tracy Mitchell said, is to hold it outdoors.

The theater recently purchased the West Water Street Shops building, which will serve as its future home, and it initially proposed setting up a tent in the parking lot there, but the village board was leery about limiting access to the 7-Eleven and other stores in the complex. The theater's latest proposal would place a tent in a section of Steinbeck Park that extends from the northern side of the building.

Bay Street plans readings of new plays on weekends in June, and would stage full-scale shows from July 6 to Sept 5, at 7:30 p.m. Tuesday through Saturday and at 5 p.m. on Sundays, Ms. Mitchell said. The season would consist of three shows, two of which would run 90 minutes without intermission. The third, "Camelot," would run longer and likely have an intermission.

The tent would accommodate 200 people seated six feet apart. The theater would provide "touchless ticketing," and patrons would have their temperatures taken upon arrival. Given the expense of putting on the performances outdoors, Bay Street would be operating at a loss, Ms. Mitchell said. If the village allowed audiences of 200, the estimated loss would be $300,000; for 100, it would be $600,000. Even though the theater would be losing money, she said, the effort would be worth it because the season would provide employment for out-of-work actors and boost the local economy.

To bolster her case, Ms. Mitchell submitted 144 letters of support for the proposal, many of them from village businesses "who understand the necessity of getting everybody back to work," she said.

Asked by the board for his opinion, Village Police Chief Austin McGuire said it would be a burden on the force to provide security for the event and to respond to noise complaints. Ms. Mitchell replied that the theater would be willing to provide its own round-the-clock security, and, if necessary, would require theatergoers to wear headsets to hear the performances.

With the end of the pandemic in sight, the village is likely to see a surge of visitors this summer, Mr. McGuire said, and the outdoor performances would add to traffic flow, parking, and pedestrian safety issues.

"I hope Bay Street is not going to pay the price, because we are a popular place to be, and a popular summer coming up," responded Ms. Mitchell. She pointed out that the Long Wharf theater holds 299 people; therefore, for an outdoor show, fewer people would be coming into the village.

Denise Schoen, the village attorney, said the proposal does not meet several code requirements, although she did not say which. According to the code, "All tents shall be removed within 48 hours following the permitted event."

"Purely from a legal perspective, the board is probably not authorized to issue the permits under the current village code," Ms. Schoen said.

"As a special request for special exemption, we do believe this would be possible, according to our attorney," said Ms. Mitchell. "Where's there's a will there's a way -- all we're asking from the village is a tent for the summer because of Covid."

"You're asking for a tent every night of the summer," replied Mayor Kathleen Mulcahy. Thomas Gardella, the deputy mayor, said he would not support the proposal based on Chief McGuire's assessment. "I just think it's overwhelming," he said. Ms. Mulcahy asked Ms. Mitchell to provide the board with a scaled-back plan.

"They're not letting us do anything. It's really disappointing," said Ms. Mitchell in an interview on Friday. "They're more worried about the 7-Eleven being in business than us." Bay Street will not be able to scale back its plan any further, she said, because it would be losing too much money as it now stands. "The theater's board supports the proposal, and not scaling it back."

"I want to work with [Mayor Mulcahy]," said Adam Potter, the chairman of Friends of Bay Street, "but everything we do, we get the door closed on us." The burden on the police is a legitimate concern, he said. "Mayor, please lead, get the police chief, the safety marshal, and village board members together, and let's have a meeting to see how we can make it happen." The theater is a "top economic driver" for the village, he said.

"If Bay Street is willing to compromise on the number of events, and-or if we could find a more secure and easy-to-access place that would be acceptable to the police chief and public safety officials, yes, we will continue to talk," said Ms. Mulcahy on Monday. "We as a village board want Bay Street to succeed." However, she said, having the tent within the village business district would not be a viable option.

Ms. Mitchell said the theater is now looking at other sites, outside the village, to erect a tent for its summer season. "We're trying other places, because Sag Harbor doesn't seem to really care about Bay Street."

A Reminder From PSEG About Digging
Petition to Speed Up Sand Replenishment in Montauk
Artistic Portraits of M.L.K. Up for Auction on Saturday
END_OF_DOCUMENT_TOKEN_TO_BE_REPLACED