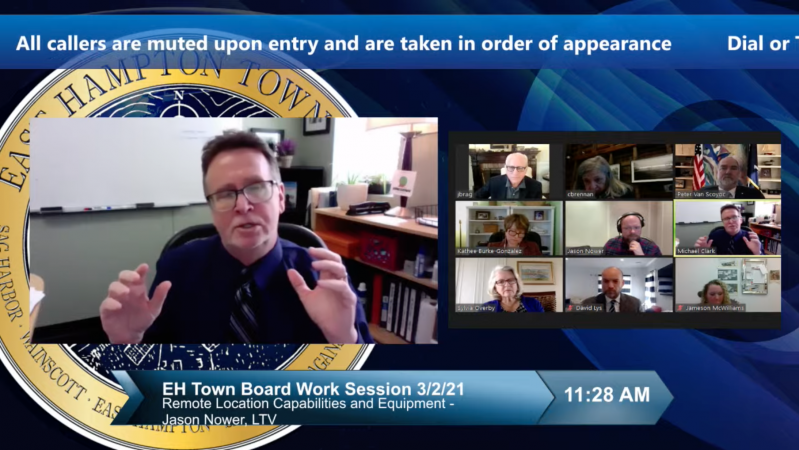 Michael Clark is the executive director of LTV.
By Christopher Walsh

The "new normal" in the wake of a pandemic that has altered life on the South Fork and beyond was considered when the East Hampton Town Board met on Tuesday, with a presentation on expanding government's ability to host meetings via video conference.

Michael Clark, executive director of LTV, and Jason Nower, a broadcast technician, described to the board a hybrid of in-person and virtual meetings, sketching a post-pandemic era that nonetheless retains elements of the way government and residents have interacted in the last year.

The "community communication initiative," Mr. Nower said, would see the use of the DTEN video conferencing system, which he said would allow superior remote participation. The DTENonTV product, which is mounted on a television monitor, has a four-camera, multiple-microphone array with 30-foot distance communication, he said. "This uses artificial intelligence to pinpoint and boost signals in key areas," allowing people to be heard from a distance.

A DTENonTV, which costs $399, could be installed at each of three hubs — possibly LTV's headquarters in Wainscott, the Montauk Firehouse, and the Windmill Village housing complex in East Hampton — at which residents could gather in smaller numbers without crowding into Town Hall, where social distancing protocols may limit occupancy into the foreseeable future. They could then be seen as well as heard by the board.

"By opening use of hubs to the public, we will be normalizing it," Mr. Nower said, "and hopefully increase interaction between the public and government."

"We can better serve the community while still providing a safe space," he said. Broadcasting government meetings would be LTV's priority, but use of DTEN "can grow past that."

It was nearly one year ago that "things changed drastically in how public meetings in the Town of East Hampton were to be held," Mr. Clark said. "We all hit the ground running, made changes on the fly, and came up with a decent alternative to keep people involved and informed" by broadcasting meetings on LTV's Channel 22, its website, and its YouTube channel, and by facilitating residents' ability to address the board via telephone. "We definitely . . . brought government meetings to the next level during a pandemic, to a point where other public access stations were contacting us for hints on how to do this and how to do it right. But the great thing about levels is there's always another one."

"We feel this is the future, the new normal," he added.

Supervisor Peter Van Scoyoc predicted New York State legislation modifying the public open meetings law "to embrace this newer technology rather than having to have in-person meetings. I don't think we'll be going back to the 'before' times." Citizen participation has grown during the pandemic, thanks to technology, he said, and "any way to increase the accessibility, so folks wouldn't necessarily come to Town Hall to join us . . . they could be live on camera and we could hear directly from them."

LTV has ordered one DTENonTV unit, Mr. Clark said, and will test it at an upcoming school board meeting.

Locations from which the public could remotely interact with the wider community "could be very beneficial well beyond government meetings," Mr. Van Scoyoc said, such as educational applications and seminars.

Petition to Speed Up Sand Replenishment in Montauk
Artistic Portraits of M.L.K. Up for Auction on Saturday
Wine Tasting for Lions Club
END_OF_DOCUMENT_TOKEN_TO_BE_REPLACED