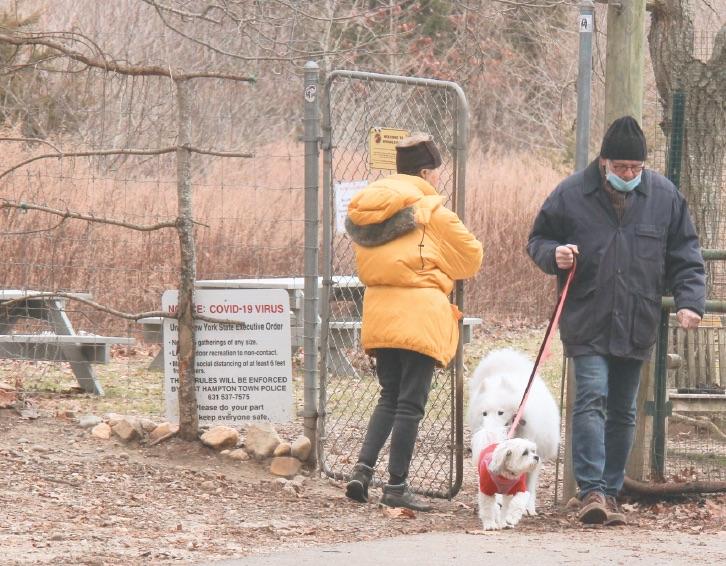 A committee has been created to address issues at the Springs Park, which is heavily used as a dog run.
Durell Godfrey
By Christopher Walsh

The East Hampton Town Board voted unanimously last Thursday to create and appoint a Springs Park Committee to address concerns at the most frequented park in the town, which is heavily used as a dog park.

The town acquired the nearly 42-acre property on Three Mile Harbor Road in 2002 using community preservation fund money. Its 2009 land management plan says the town board at the time resolved to use the land for open-space preservation and possible future use for sports and active recreation, but the parcel has evolved naturally. Though it is not officially designated as a dog park, some Springs residents have voiced concerns about aggressive dogs and fights among dogs.

The 2009 management plan "addresses the fact that there would be an ongoing need to remove autumn olives as 'this highly invasive species has become a major problem for the park,' " according to last Thursday's resolution. The plan also states that "the recent use of this parcel for off-leash dogs should be maintained with a clear set of rules and regulations to provide for the safety and enjoyment of all wishing to use this area. In cooperation with the members of the dog walking community who have utilized the park more than any other user group, the Town of East Hampton must rely on this group to shoulder some of the responsibility for this special area."

Councilwoman Kathee Burke-Gonzalez, the town board's liaison to the Springs Citizens Advisory Committee, had proposed forming a committee to make recommendations on how to deal with the autumn olives and address any other issues. "We're not looking to change anything," she told The Star earlier this month, "but when town staff tells you there's a safety issue, as a town board member it's incumbent on me to look into that and see how we can rectify that."

"I think there is no real problem with Springs Park," Councilman Jeff Bragman said during a discussion before last Thursday's vote to create the committee. The park "evolved as the community wanted it to evolve," he said, suggesting that the invasive species did not pose a hazard to public safety. "Forming a committee doesn't pose any immediate risk," Mr. Bragman added, "but I am a little concerned about the process, because I don't think the public has been involved."

Ms. Burke-Gonzalez and Supervisor Peter Van Scoyoc disagreed, pointing to concerns brought directly to them and via the citizens advisory committee. "The result of this could be better signage [and] removal of some invasive species that prevent folks from having sightlines to dogs," Ms. Burke-Gonzalez said.