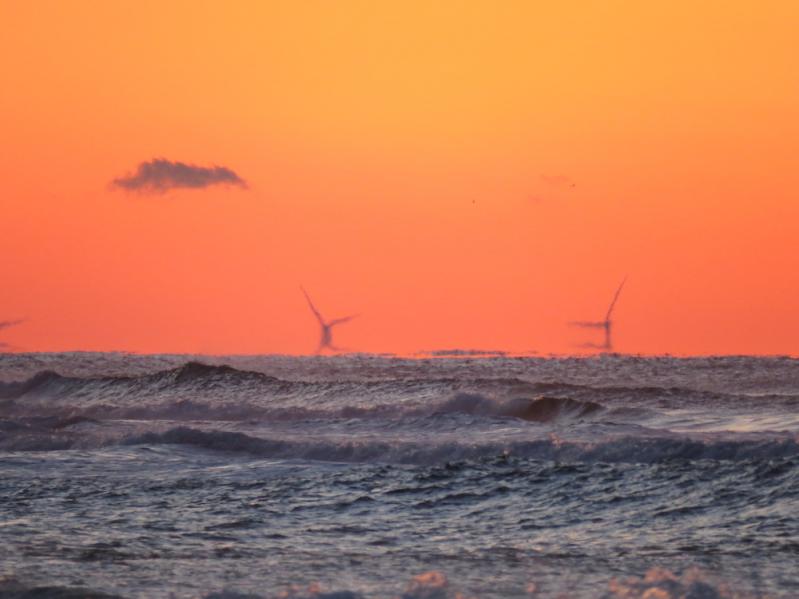 The Block Island Wind Farm, as seen from the ocean beach in Montauk, is the country's first offshore wind farm.
By Christopher Walsh

Twenty-five members of the New York and New Jersey delegations to the House of Representatives wrote to Amanda Lefton, the new director of the federal Bureau of Ocean Energy Management, on Friday to urge her to "jump-start the offshore wind leasing process" by issuing final Wind Energy Areas and subsequent lease auctions in the New York Bight.

New York and New Jersey "would see more high-paying jobs, new sources of tax revenue, and massive capital investments as a result of new leasing and subsequent offshore wind development and construction in the New York Bight," the representatives wrote, estimating that from 2025 to 2030, construction within the New York Bight could support 32,200 jobs a year, $3.3 billion in annual wages, and $183 million in annual state tax revenue. From 2022 to 2030, the Bight could attract $45.9 billion in total development and construction capital investment, they wrote. "This is just a slice of the total benefit from offshore wind development across the United States."

But, "Before we can realize all the benefits of offshore wind, the federal government must provide new opportunities for developers to acquire commercial wind leases," the 24 Democrats and one Republican continued. The bureau has not held a lease sale in federal waters since 2018, and the last New York Bight lease sale occurred in 2016.

The Climate Leadership and Community Protection Act, which Gov. Andrew M. Cuomo signed into law in 2019, established a commitment to generate 9,000 megawatts of offshore wind by 2035. Five proposed offshore wind projects in federal waters, including the South Fork Wind farm, to be constructed approximately 35 miles east of Montauk, would provide 4,316 megawatts. Additional wind farms will be needed if the state is to achieve its goal, but new projects cannot get underway until the bureau finalizes new Wind Energy Areas and holds new lease auctions.

Gov. Phil Murphy of New Jersey signed an executive order in 2018 aimed at obtaining 3,500 megawatts of electricity from offshore wind by 2030.

The representatives' letter renews a call for action issued to the Bureau of Ocean Energy Management in a New York delegation letter in August 2020. The bureau was scheduled to announced Wind Energy Areas in early 2019, but the Trump administration did not adhere to the timeline, and final designations still have not been made. The bureau must designate these areas prior to lease auctions in order for developers to bid on the right to apply for federal permits to construct wind farms in them.