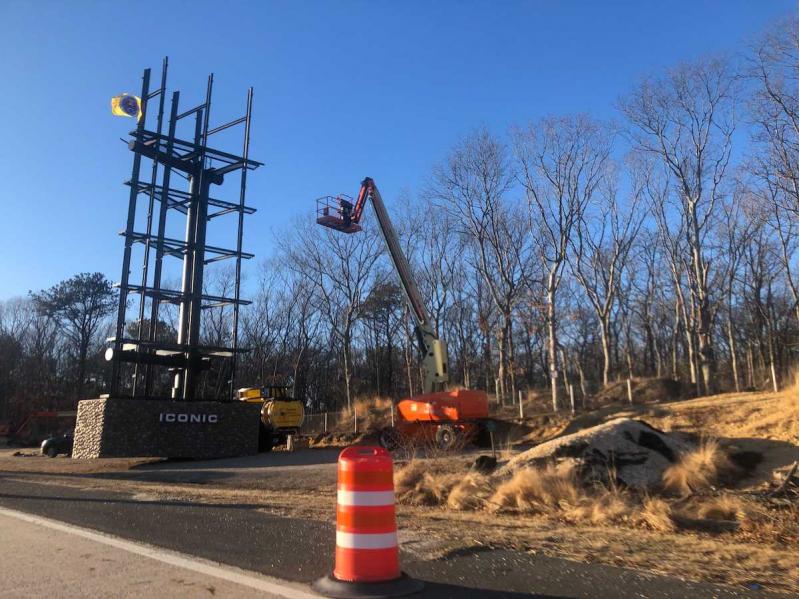 The Shinnecock Nation was proceeding quickly with construction of a billboard on the westbound side of Sunrise Highway last week when it received a stop work order from the New York State Department of Transportation.
Christine Sampson
By Bella Lewis

The New York State Department of Transportation issued a stop-work order to the Shinnecock Nation last Thursday, demanding an end to the recent construction of the second of two controversial billboards on either side of Sunrise Highway in Hampton Bays.

In a statement released by the Shinnecock Nation, the Shinnecocks' Council of Trustees said that on the heels of the stop-work order, the council also received "a letter to the Nation brazenly threatening the destruction of the Monuments if the Nation did not comply with the D.O.T.'s demands."

Lance A. Gumbs, a former vice chairman of the council, posted on Facebook regarding the details of the letter.

"They have implemented a $2000.00 dollar per day fine against the Nation, a thousand per monument in the middle of this Covid pandemic," Mr. Gumbs wrote in a Facebook post on Sunday. "They have given us 30 days to remove the Monuments or have threatened to come on to tribal land to physically remove them which they don't have the jurisdiction to do and clearly the nation would never let happen under any circumstances!"

The "monuments," say the Shinnecocks, are on historical aboriginal territory, and therefore outside of the state's jurisdiction. The Shinnecocks' argument in favor of the 61-foot-tall electronic signs and the revenue they generate for the community seemed to be strengthened in May when State Supreme Court Justice Sanford Neil Berland rejected the state's request for a preliminary injunction to have the signs removed.

The Shinnecocks maintain that "the D.O.T. lacks authority over Nation lands‚" and moreover that the state's supposed safety concerns about the billboards are an odd claim when "the State itself has paid to advertise on these very same Monuments. The Monuments have also been utilized by local municipalities to raise awareness of public health initiatives during the Covid pandemic," the Council of Trustees wrote.

Mr. Gumbs reiterated that a safe boating course advertisement had indeed been funded by the state, reinforcing his belief that threats to fine and forcibly remove the signs are "just one example of the mistreatment the Nation has suffered at the hands of the State."

In his post, Mr. Gumbs also noted "a lack of respect for our leadership" insofar as the assistant attorney general had been directly corresponding with the Nation regarding the D.O.T.'s case, yet the letter is signed by an "underling Assistant Counsel to the Department of Transportation."

"When it comes to the Shinnecock Nation, the State D.O.T., and the large electronic billboards, continued confrontation and litigation has been counterproductive for both the state and the Shinnecocks," Assemblyman Fred W. Thiele Jr. said in an email. "The Shinnecocks have sought to pursue a sustainable economic development strategy that could benefit both its members and the community at large. Their efforts to meet with the state's executive branch to discuss economic development, despite my support, have been ignored in the past. That failure to even talk has triggered this confrontation over the billboards. I suggest the state seek consensus with the Shinnecocks, not conflict. Both sides and the community could end up winners."

The Shinnecock Nation has encouraged people to contact Gov. Andrew M. Cuomo's office and offered a script for those calls, suggesting people urge the state "to drop the baseless lawsuit — a clear attempt to obstruct the Shinnecock Nation's economic development and to strangle its ability to meet the basic housing, education, and food needs of its tribal members. It's also a blatant waste of taxpayer money. Stop the economic warfare!"