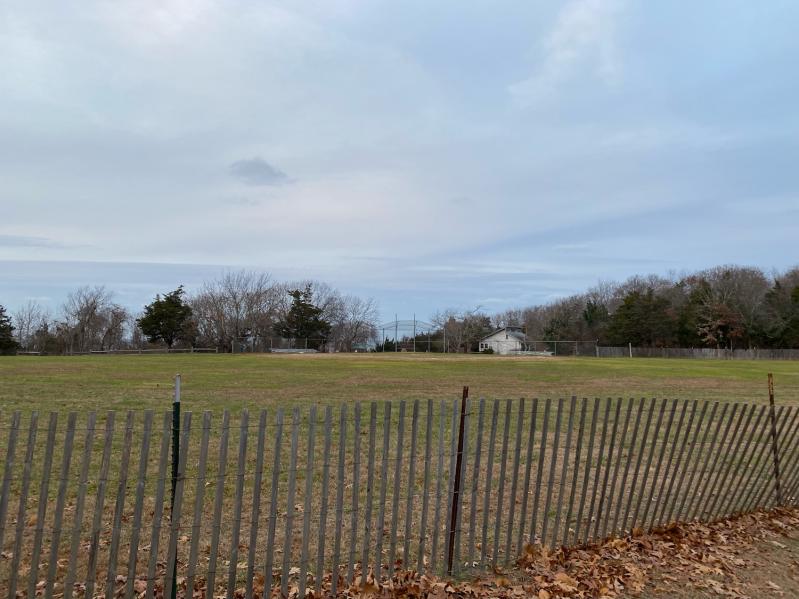 An 88-foot-tall cell on wheels, or COW, could be in place at Maidstone Park in early spring and would provide emergency communications while a permanent tower is designed and constructed.
Christopher Walsh
By Christopher Walsh

The longstanding question of how to complete the upgrade of East Hampton Town’s emergency communications system moved forward on separate fronts on Tuesday when the town board agreed that the best spot to put temporary communications equipment appeared to be Maidstone Park.

Meanwhile, in executive session later on Tuesday, the board was to discuss a contract with American Tower that would allow the town to put a permanent tower at Camp Blue Bay on Flaggy Hole Road for both emergency and personal wireless antennas. American Tower operates wireless and broadcast communications infrastructure and has an existing lease agreement with the Girl Scouts of Nassau County, owners of Camp Blue Bay.

Each project, should it come to fruition, would represent a significant victory for residents of a Springs neighborhood who mobilized to thwart an earlier plan to install a permanent, 185-foot cell tower in a wooded area bordered by Crandall Street, Lincoln Avenue, Norfolk Street, and Fort Pond Boulevard.

An 88-foot-tall cell on wheels, or COW, could be in place at Maidstone Park in early spring and would provide emergency communications while a permanent tower is designed and constructed. It would not hold personal wireless equipment.

Eddie Schnell, the town’s communications director, told the board during its work session on Tuesday that a temporary tower would have to be located north of Woodbine Drive in Springs in order to provide needed emergency communications for police, fire, ambulance, and other government officials. It cannot be parked on restricted property, such as that acquired with community preservation fund money, he said.

A cleared area south of a baseball field at Maidstone Park is one option, Mr. Schnell said. Other options are a cleared area on the Springs Library property and the parking lot at the end of Gann Road. The Crandall Street site was now deemed unsuitable, as were several others.

The temporary system would be connected to the electrical grid, Mr. Schnell said, and a generator would only run in the event of a power outage. “This would be sourced from Suffolk County,” Mr. Schnell said of the temporary tower plan. “They’ve offered to loan us one for this.”

“The good news is that we don’t need a decision today,” he said. “The bad news is that’s because we have to wait two months-plus for equipment to show up once we finally order it.” He suggested that all necessary equipment be ordered sooner rather than later, and ideally before year’s end so that “once the equipment is in we can get it deployed quickly.” Cell on wheels are designed for rapid deployment, he said.

The COW could be operational no later than next summer, he said, but probably no sooner than March or April. Once a site for a permanent tower has been finalized, the construction process would take another three to six months, he said. “What this provides,” he said of the temporary equipment, “is immediate coverage to Springs until a permanent tower is ironed out. This is there until that happens.”

The library property is in a historic district, Supervisor Peter Van Scoyoc said, and Gann Road is probably at the lowest elevation among the three sites. “Maidstone Park has a slight advantage,” Mr. Schnell agreed.

Councilwoman Sylvia Overby said that the board should seek input from the Springs Citizens Advisory Committee about the site options.

Councilman Jeff Bragman said that “it might be a good idea to see if there is any legal issue in using Maidstone Park, because it is a park.” John Jilnicki, the town attorney, agreed to research the question.

Carl Irace, an attorney representing the Springs Fire District’s board of commissioners, called into the virtual meeting to again offer the Springs Fire Department property as a spot for the temporary communications equipment. The search for an appropriate site was limited to town-owned properties, Mr. Van Scoyoc said, so as to avoid a time-consuming site plan review.

Earlier in the meeting, in response to a request for an update from a Springs resident, Mr. Van Scoyoc said that negotiations with American Tower were proceeding, and “we’re working to finalize an agreement. Hopefully we will be able to talk about that in greater detail very soon.”

Tower sites in Montauk, Noyac, East Hampton, Wainscott, and Amagansett are operating with a new digital system providing greatly increased capacity and reliability. The system is used by the police departments of the town and East Hampton and Sag Harbor Villages, fire departments, and most town and village departments that use radios.

Finding a suitable site for a permanent tower in Springs has held up completion of an emergency-communications overhaul. Every parcel in the hamlet larger than one acre was looked at, Mr. Schnell told the board last summer, but “the entirety of Springs” is residential or purchased with community preservation fund money for open space or preservation, in a historic district or area of statewide significance, or otherwise unbuildable, he said.

Town officials said last summer that that Crandall Street site may have been the only one in the hamlet on which to place an emergency communications tower. But the board revisited Camp Blue Bay as a possibility when its director of camping services attended a board meeting and suggested that a portion of the 170-acre site could house a tower tall enough to serve the hamlet’s needs. Her remarks revived the site as a potential alternative to the Crandall Street location.