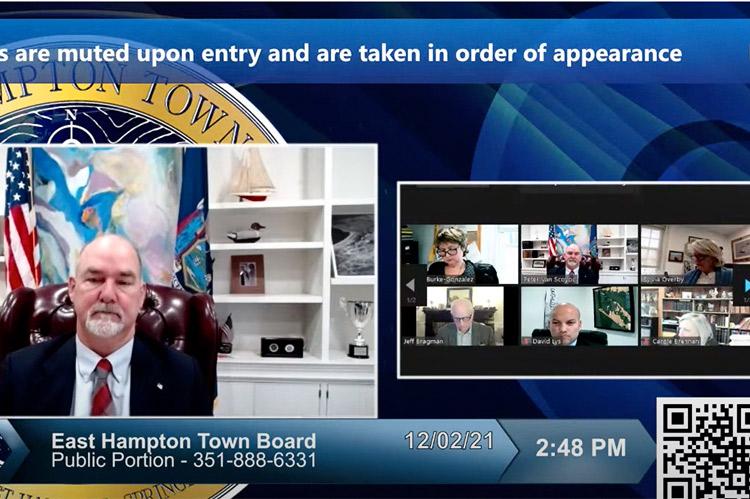 The East Hampton Town Board’s 3-to-2 vote last month to acquire three parcels totaling 1.92 acres on Green Hollow Road in East Hampton, using $4.2 million from the community preservation fund plus a $2.645-million donation from several unidentified neighbors, was again criticized by members of the public at the board’s meeting last Thursday.

The Nov. 18 split vote to acquire numbers 28, 30, and 32 Green Hollow Road reflected complaints first aired at an Oct. 21 hearing, about a lack of transparency and an excessive purchase price. A fourth adjacent lot, which was sold for $1.3 million, is now being developed. The four lots border on 6.8 acres of town-owned active farmland, and lie within a Special Groundwater Protection Area.

In lengthy remarks last Thursday, David Buda of Springs, a frequent caller to the town board’s virtual meetings, complained of scant information provided to the public as to the identity of the donors. His efforts to learn their names, he said, were “improperly frustrated by town officers, in this case the town attorney’s office refusing to make public the identity of the maker of a purported $1.53 million charitable donation that was an essential element to making the transaction more palatable to members of the town board.”

It wasn’t until after the board’s split vote to approve the acquisition that he was provided with “the wrongfully withheld information,” Mr. Buda said, which revealed the donor as ICON International of Stamford, Conn. ICON, according to its website, is “a specialized finance company engaged in corporate barter to help companies restore value to underperforming assets and fund corporate expenses.”

“This is hardly a philanthropic entity acting out of concern for the East Hampton environment, as represented by one of the public-hearing speakers,” he said. Mr. Buda was among seven who spoke at that hearing, with four in favor and three against.

Jaine Mehring, who had also criticized the acquisition, said she accepted the board’s vote, but suggested that the town, having “bestowed such a significant individual benefit to the surrounding neighbors of this property,” should request or compel several property owners on Horse Meadow Lane, adjacent to the acquired parcels, to “revegetate the back of their fully cleared properties,” in order to restore a viewshed from Montauk Highway. The board should also work with the developer of the fourth Green Hollow Road parcel to enforce any revegetation requirements and potential violations of clearing restrictions, she said.

Also at the meeting, the board voted to acquire a .2-acre parcel at 8 Muchmore Lane in East Hampton Village using $2.557 million from the community preservation fund. That acquisition, too, had drawn questions and skepticism from Mr. Buda and Ms. Mehring during a public hearing last month.