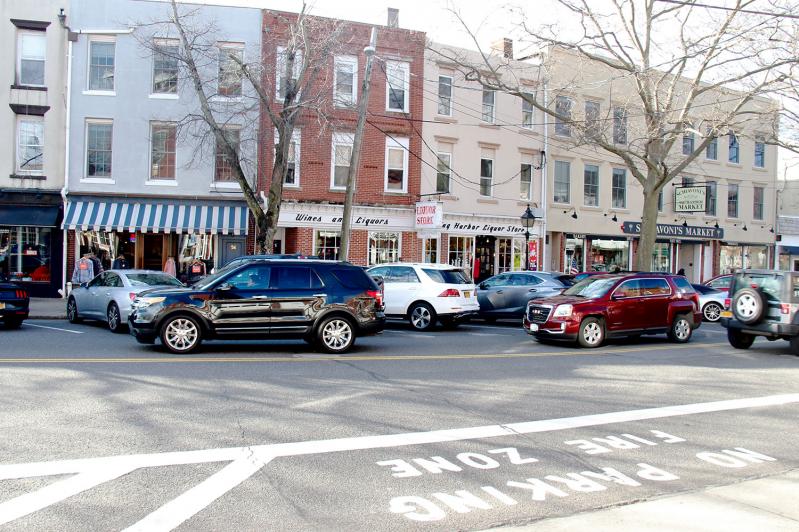 Business owners debated the pros and cons of plans to charge for parking in Sag Harbor and East Hampton Villages.
Durell Godfrey
By Jamie Bufalino

Proposals to charge for prime parking spaces in East Hampton and Sag Harbor Village are receiving mixed reactions from the villages’ business owners.

East Hampton Village’s plan calls for charging those who are not village residents $2 per hour for up to three hours of parking in the downtown Reutershan and Schenck lots from May 15 to Sept. 15. Mayor Jerry Larsen has said the village expects to make about $2 million annually from paid parking, and intends to use the money to help pay for the installation of a centralized sewer system to service the commercial core. A sewer system would help protect water quality and allow more restaurants and other food businesses that create high septic flow to open in the village.

“I think charging for parking sends a dreadful message,” said Valerie Smith, the owner of the Monogram Shop on Newtown Lane. “We should be a welcoming and inclusive village.” Allowing village residents to park for free while asking East Hampton Town residents and visitors to pay would be “horribly discriminatory,” she said.

Khanh Ngo, the owner of Khanh Sports on the Reutershan lot, said charging for parking would be a far better way for the village to raise revenue than its current method of issuing citations. “You want to keep this place beautiful, but the money has to come from somewhere,” he said.

Christine Clark, who owns Black Sheep Knitworks, a yarn and knitting supplies store in an alley off Newtown Lane, said she preferred an earlier proposal to provide two hours of free parking to everyone and charge for additional hours, but didn’t think the new plan would deter customers from shopping.

“If it’s just two dollars, what’s two dollars?” she said. Ms. Clark, who parks in the village’s long-term parking lot during workdays, was more concerned that she might be charged to park while doing business-related errands. “I don’t want to have to carry my bags of garbage all the way across Herrick Park, so I’m wondering if I’m going to be able to come in, park for five minutes, grab my garbage, and go,” she said. According to Mayor Larsen’s plan, at least 30 minutes of free parking will be allowed in spaces along the perimeter of the lot.

Mr. Larsen has also proposed reconfiguring the spaces along the perimeter of the lot and on the eastern end of Newtown Lane from parallel to nose-in parking. That change would increase the number of spaces, he said, but it would require the removal of an eastbound lane of traffic on Newtown Lane from Park Place to just shy of the intersection of Main Street. “I think that’s a good idea,” said Ms. Clark of nose-in parking on Newtown Lane. She wasn’t bothered by the loss of a lane, she said, but she’d like the village to crack down on people double parking on the street.

Ms. Smith said she wasn’t concerned about the reconfiguration either.

Sag Harbor Village’s paid parking plan calls for allowing one hour of free park ing on Main Street and in the Long Wharf lot and charging for additional hours between Memorial Day and Columbus Day weekends. A maximum of three hours of parking would be allowed between 10 a.m. and 5 p.m., and the cost would be $5 for the first additional hour, and $7.50 for the second. Between 5 p.m. and midnight, a maximum of four hours would be allowed at a cost of $5 for the first additional hour, $7.50 for the second, and $15 for the third. Village residents and the village’s first responders would receive a discount on the fees, and handicap spaces would remain free at all times, said Aidan Corish, a village trustee who has been oversee ing the plan’s development. Mr. Corish noted that about 75 percent of the village’s existing spaces would remain free.

The village expects to collect $1 million per year in revenue from paid parking, Mr. Corish said, and it would use the money to pay for infrastructure repair, the creation of bike lanes and new sidewalks, and other public works projects.

“As a business owner, fabulous, great, in my opinion,” Nada Barry, an owner of the Wharf Shop on Main Street, said of the plan at a Dec. 8 meeting of the Sag Harbor board. Her one concern, she said, was that four hours would not be enough time for people to have dinner and catch a three-hour show at Bay Street Theater. “It doesn’t really cover Bay Street for older people who aren’t disabled,” she said. “We need one more hour on Long Wharf.” When the village board discussed the plan again at a Jan. 12 meeting, the four-hour time limit was still being proposed.

Sag Harbor and East Hampton Villages plan to hire ParkMobile, a mobile payment company, that uses a smartphone app to collect parking fees. Jesse Matsuoka, an owner of Sen and K-Pasa restaurants, said he has had positive experiences using such apps in other municipalities, but wasn’t sure how it would fare in Sag Harbor. “I haven’t seen the effects from a business owner’s side,” he said at a panel The Express News Group held on the villages’ proposals. Still, charging for parking would be better than issuing citations, he said. Like East Hampton Village, Sag Harbor should allow residents to park for free, Mr. Matsuoka said.

David Brogna, the owner of the In Home store, is worried that paid parking would “change the complexion of the village” and make customers irate, he said at the panel. “The day this goes into effect, I invite all officials to be in our store — or any store on Main Street — to deal with what we get from people,” he said. He wasn’t completely against the idea of charging for parking, he said, but he recommended that the village “start slow” by implementing the plan only in the Long Wharf lot.

During village board discussions, James Larocca, a trustee, said he objected to charging for parking because it amounted to a regressive tax that would be more burdensome to those with lower incomes, and because elderly residents would likely be hard pressed to use the technology needed to pay for fees. In addition to the app, ParkMobile provides an option to pay via a 1-800 number, but Mr. Larocca said even that method would be cumbersome for many.

Mr. Brogna agreed. “You have 80 and 90-year-old people coming to the shop who don’t even have a smartphone,” he said.

Mark Smith, an owner of the Rowdy Hall restaurant on Main Street in East Hampton Village, acknowledged that the fees would have a greater economic impact on “all those people who are the backbone of the community.”

“A second-home owner who lives south of the highway is not going to care how much he pays or she pays for parking, but a schoolteacher or civil servant might be concerned,” he said. Still, from a business perspective the proposals made sense, he said, because they would raise revenue for the village, as sure turnover in the lots, and give visitors enough time to explore what the commercial core has to offer. “Anything we can do to increase the ability for people to come into the village, to shop, see a movie, and have something to eat would be a huge benefit to not only the restaurants but shop owners in general,” he said.