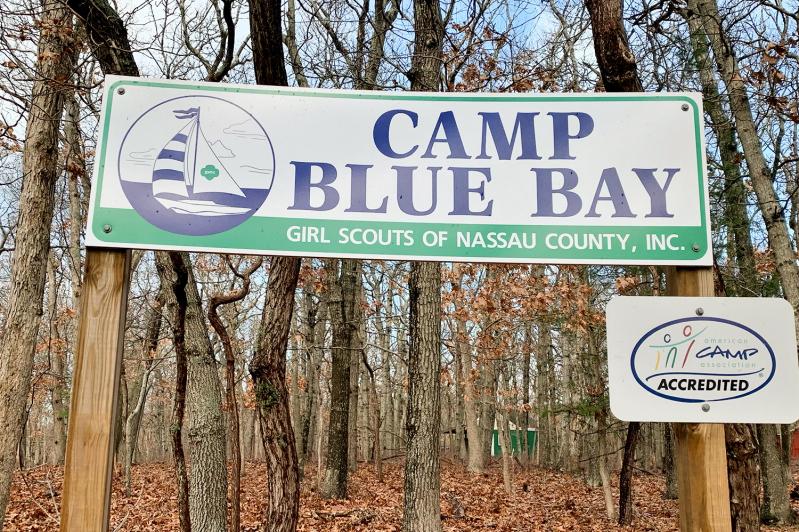 An emergency communications tower will be erected at Camp Blue Bay in Springs, and not in a wooded area nearby as originally proposed.
Durell Godfrey
By Christopher Walsh

With the East Hampton Town Board’s unanimous vote on Tuesday to approve an agreement to put an emergency communications tower at the Camp Blue Bay property on Flaggy Hole Road in Springs, a collective sigh of relief could be heard elsewhere in the hamlet as residents’ five-month struggle to prevent the tower from being erected in a wooded area in their neighborhood had officially succeeded.

Tuesday’s vote authorized Supervisor Peter Van Scoyoc to execute a contract with American Tower to install the town’s emergency communications equipment at the highest elevation on a new tower that is to be installed at Camp Blue Bay, which is owned by the Girl Scouts of Nassau County. American Tower operates wireless and broadcast communications infrastructure and has an existing lease agreement with the Girl Scouts.

The town’s agreement with American Tower is for a term of 30 years with three 10-year renewal options. The town will make a one-time contribution of $150,000 toward the tower’s construction.

The town board had previously homed in on the town-owned, 6.9-acre wooded area bordered by Crandall Street, Norfolk Street, Lincoln Avenue, and Fort Pond Boulevard as the optimal site for a 185-foot monopole, which officials said was sorely needed to achieve comprehensive coverage by completing the overhaul of the town’s emergency communications infrastructure, which started in 2017.

The site was to first get a 100-foot temporary pole or a “cell on wheels” — telecommunications equipment mounted on a truck — to provide both emergency communications and cellular service from two cellular carriers while a permanent tower was designed and constructed.

But following a report on the proposal in the July 15 issue of The Star, residents, outraged at the thought of a 185-foot tower in their neighborhood and the clearing of a portion of the wooded area that is commonly used as a park, mobilized and fought vociferously against it. During July and August, the brief span in which the board resumed in-person meetings before returning to a virtual format, infuriated residents packed the meeting room at Town Hall to berate board members for what they said would endanger them, destroy parkland and wildlife habitat, and negatively impact their property values.

Town officials had said that the wooded area was the only realistic site in the hamlet, given multiple constraints that rendered other sites impossible. Every parcel in the hamlet larger than one acre was looked at, Eddie Schnell, the Police Department’s communications technician, said last summer, but “the entirety of Springs” is residential, purchased with community preservation fund money for open space or preservation, in a historic district or area of statewide significance, or otherwise “unbuildable.”

Previous negotiations with the Girl Scouts had proven fruitless and were abandoned, board members said. But one attendee of the board’s Aug. 10 meeting was Camp Blue Bay’s director of camping services, who suggested that a portion of the 170-acre site on Flaggy Hole Road could house a tower to serve the hamlet’s emergency and personal wireless communications needs. Negotiations resumed, culminating in Tuesday’s agreement and a most welcome gift to the Crandall Street neighborhood residents days before Christmas.

The board has recently proposed siting the temporary tower elsewhere as well, with Maidstone Park, the Springs Library, or the parking lot at the end of Gann Road under consideration. A decision as to its location must be made by mid-January, Councilwoman Kathee Burke-Gonzalez said on Tuesday.

The board voted last Thursday to purchase equipment for installation of the temporary tower.

Eleven residents of the Crandall Street neighborhood called in to Tuesday’s meeting to thank the board for hearing their concerns, to support adding the wooded area to the town’s nature preserve properties, or both.

Resolution of the controversy, Councilman Jeff Bragman said, was “an example of how effective a local community can be. I think they got the town board on track, and they were able to persuade us to go back and negotiate with American Tower for what proved to be the optimal location for the tower.” The neighbors’ involvement “enabled us to come up with a solution that hurt no one,” he said. “We’re one town. We have issues and challenges and problems, but they’re one problem, one issue, one challenge, and the solutions have to work for everybody in town.”

It was Mr. Bragman’s last meeting as a member of town government, following his unsuccessful challenge to Mr. Van Scoyoc in last month’s election. Mr. Bragman had sought the supervisor’s seat after the East Hampton Democratic Committee declined to endorse him for re-election at its February nominating convention.

He thanked his colleagues “for the opportunity to debate and discuss issues, which I think we all recognize is the heart of democracy and keeping us on track and effective. It’s always been interesting,” he said. “I’m grateful for the opportunity.”

He thanked town employees and residents who “take the time to attend our meetings” in person or virtually. “Their participation is absolutely essential. Politics is not a spectator sport.”

Earlier in the meeting, Jacki Esposito, one of the most persistent critics of the plan to put the emergency communications tower in her neighborhood, thanked Mr. Bragman “for his dedication to our community.” Mr. Bragman had opposed the Crandall Street location for the tower. “You were our advocate before we knew we needed one,” Ms. Esposito said.