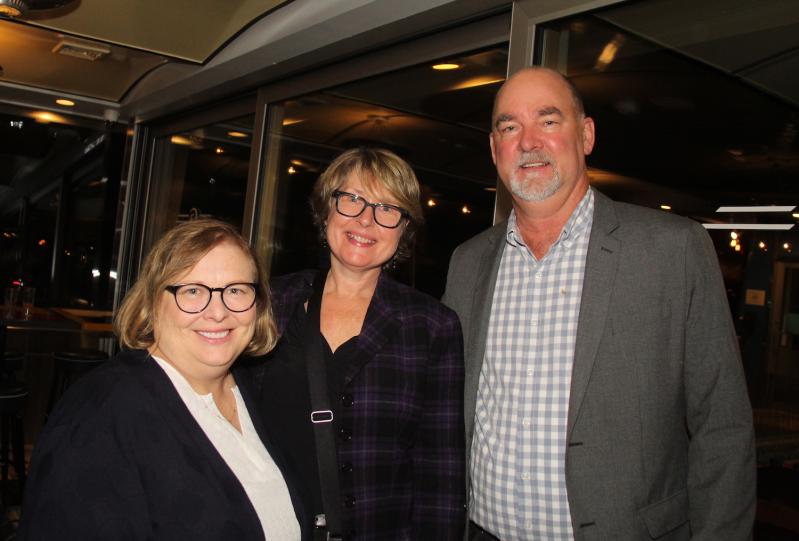 East Hampton Town Democrats swept Tuesday's elections, with unofficial results, delayed by several hours apparently due to poor cellphone reception, indicating that Supervisor Peter Van Scoyoc and Councilwoman Kathee Burke-Gonzalez will easily win a third term and that the Democrats will maintain a lock on the town board.

With all 19 election districts reporting, the Suffolk County Board of Elections had Mr. Van Scoyoc leading Councilman Jeff Bragman, who challenged him after being denied his party's endorsement for a second term on the town board, 2,831 votes to 1,702 votes, or 47 percent to 28 percent. Ken Walles, the Republican and Conservative Party candidate, trailed at 1,504 votes, or 25 percent.

Cate Rogers, the former chairwoman of the East Hampton Democratic Committee, was leading a five-way race for the two seats on the town board that are up for re-election, winning 3,289 votes, or 28.66 percent. Ms. Burke-Gonzalez was close behind with 3,276 votes, or 28.54 percent. Joe Karpinski and George Aman, the Republican and Conservative Party candidates, were far behind at 1,837 and 1,682 votes respectively, or 16.02 and 14.66 percent. John Whelan, the Independence Party candidate and chairman of the town's zoning board of appeals, had 1,392 votes, or 12.13 percent.

Should the unofficial tally hold, there will be little change to the composition of the nine-member town trustees, with eight Democrats and the ninth cross-endorsed by the Democratic Committee. Jim Grimes, a Republican who ran with Democratic backing, was by far the top vote-getter. Following him to win re-election were Francis Bock, the trustees' clerk, Susan McGraw Keber, Bill Taylor, Ben Dollinger, Tim Garneau, John Aldred, and Mike Martinsen. David Cataletto, whom the Democratic Committee chose after rebuffing the three-term incumbent Rick Drew's quest for a fourth campaign, also won a seat. The trustee election is covered separately in this issue.

"You never know how these things are going to go," Mr. Van Scoyoc said Wednesday, reflecting on his apparent landslide victory. "I was guardedly optimistic," he said, pointing to what he called a record of sound financial management, guiding the town through the Covid-19 pandemic while maintaining a functioning government, and forward movement on renewable energy, "and I think the public responded resoundingly."

"The fact that Democrats resoundingly won in this election, when a lot of Suffolk County went the other way, I think demonstrates that we've worked well for our constituents and got a lot of things done, and they're happy with that," Mr. Van Scoyoc said.

His priorities in the next term include housing affordability and the future of East Hampton Airport. "I really want to try to get that moved ahead and have some resolution to some of the outstanding issues about volume, frequency, noise, and environmental impacts of aircraft at our airport." He will meet with Federal Aviation Administration officials later this month, he said, "and will continue to meet with all stakeholders of the airport to chart a path forward that gets full relief for those affected."

"I thank the voters who put their trust in Peter, Kathee, me, and all our running mates," Ms. Rogers said Wednesday. "Our success is based on teamwork and our love for East Hampton. We have an amazing group of volunteers who spend hours and hours for the benefit of our community. I thank them for their hard work and dedication."

"I am so grateful for this opportunity," she added. "Now I am eager to get to work for all the community and this beautiful place we call home."

Ms. Burke-Gonzalez said she "will remain focused on securing meaningful relief from noisy aircraft, creating affordable housing opportunities, completing the emergency communications upgrade, and constructing a new senior center. I look forward to serving our community with like-minded folks who care deeply about what matters here." The board will not always agree, she said. "There will be thoughtful conversations to be had. I look forward to that come January."

"Tuesday's election results are obviously not what we wanted," Mr. Bragman said Wednesday. "However, I am proud to have run a strong campaign on a shoestring budget and grateful to all our volunteers for their commitment and energy."

"We knew that we faced long odds in challenging an entrenched political machine," he said. "The truth is that there are many disengaged, if well-meaning, voters. Many houses we visited were vacant second homes, which are quickly displacing the local majority. Absentee ballots confirm the trend."

"While we came up short, we are encouraged by the fact that Mr. Van Scoyoc and the machine won less than 50 percent of the total votes counted at this point. A majority rejected their candidate, but were divided between Independents and Republicans."

"My hope is that an informed local community can unite because the future of East Hampton depends on it. The political machine has shown little interest in controlling the commercialization and development, forcing our friends and neighbors out. It has been and remains an enabler of those trends. The truth is that East Hampton is at a tipping point and the time for preserving our small-town character is quickly running out."

Mr. Walles offered his congratulations to Mr. Van Scoyoc. "He'll have my support no matter what," he said Wednesday, adding that he is unlikely to seek office a second time. "I was never one to be a politician," he said, referring to his business background. "That's what I felt the town needed, was reorganization from a management perspective -- restructuring, analyzing all the offices, streamlining things, and making things more efficient, not from a political approach, where you do and say anything to appease everybody."

The campaign was interesting and educational, he said. "I'll help and do whatever I can in the future."

"Obviously it's not the desired result,╙ Mr. Karpinski said. "We would have preferred a different outcome but at the end of the day I'm happy with the campaign and all the issues we brought to light that have been neglected for far too long."

Election Day followed a rancorous campaign between Mr. Van Scoyoc and Mr. Bragman, a reflection of their repeated sparring during the latter half of the four years each has served in his present position.

The Democratic and Independence Party candidates for town board were almost in lockstep on issues, if the debates and a Conversations with the Candidates forum hosted by the East Hampton Village Preservation Society were any indication. In contrast to the candidates for supervisor, each was reluctant to criticize the other, instead speaking of their own achievements and agendas if elected.

"I thank all of the voters who encouraged me and supported me with their votes," Mr. Whelan said Wednesday. "I congratulate Cate, Kathee, and Peter on their victories. I will never regret the effort that I made to get out there, meet so many of you around town, and to run my campaign based on my true convictions and positions. I hoped to serve you all and follow up on what we discussed. This was not my time, and I wish the town board all the best in doing what needs to be done in East Hampton."