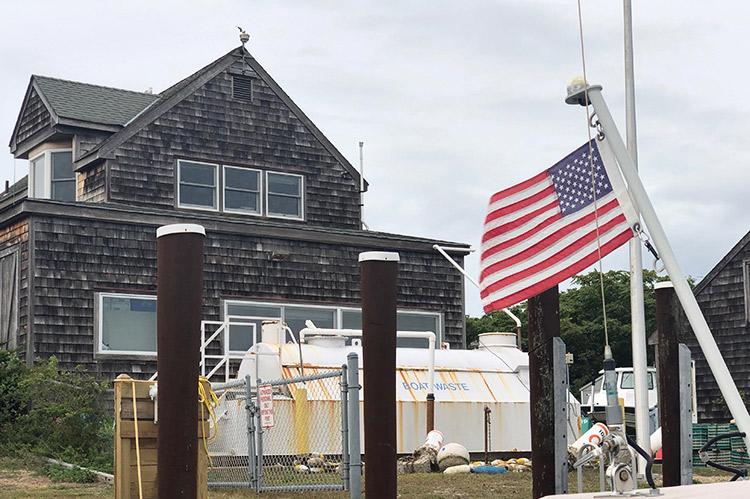 The 15-year-old tanks holding effluent from the pump-out boats operated by the East Hampton Town Trustees in Three Mile Harbor, above, and Lake Montauk need to be replaced with new, larger tanks.
Carissa Katz
By Christopher Walsh

The tanks holding effluent from the pump-out boats operated by the East Hampton Town Trustees in Three Mile Harbor and Lake Montauk are undersized and in need of replacement, the town board was told on Tuesday.

Representatives of the town’s water quality technical advisory committee also recommended a stormwater abatement plan to control runoff and erosion at the north end of Louse Point Road in Springs and its parking area.

Recreational boating surged in 2020 and has not declined since the onset of the Covid-19 pandemic. The trustees, who recently added a third pump-out boat, have long spoken about the increased demand on the wastewater pump-out boats that service, free of charge, boaters in the two water bodies.

“They have to accept vessels that come to them from wherever they might come from,” Chris Clapp, the committee’s chairman, said of the pump-out boats. The service, he said, discourages people from directly discharging sewage, which is illegal.

The existing, 3,000-gallon pump-out tanks “routinely need replacing anyway,” Mr. Clapp said, owing to a marine environment that is “tough on these metal tanks and associated fittings.” Both tanks are already 15 years old, he said, and should be replaced with 5,000-gallon models that would allow both visual assessment of the level of effluent within and an automatic shut-off function.

He recommended $23,100 of community preservation fund money for design and construction support. Board members voiced their support.

There is significant erosion at the inlet at Louse Point, with asphalt overhanging the dune, and runoff is causing erosion of walking paths and areas where people enter the water. Conditions at the end of Louse Point Road, the parking area, the boat ramp, and the walkways to the beach should be improved, Mr. Clapp said.

As a temporary solution to ponding and runoff, the parking area was regraded with asphalt millings earlier this year, but it should be replaced with crushed stone to improve its permeability, Mr. Clapp said. Excess pavement that extends beyond the post-and-rail fence should also be removed and the dune crest revegetated with native species and stabilized, he said.

Mr. Clapp showed the board a conceptual drawing depicting the removal of almost 50 feet of existing roadway, a new post-and-rail fence with entrance points, and a nonslip mat that would enable those with disabilities to access the beach. He recommended a $19,400 expenditure on design and engineering. The full project would cost around $130,000, he said. “During this phase, we’d also be seeking and receiving public input as to how to have a better site that will both enhance the health of the site as well as understanding how the community currently uses the site,” he said.