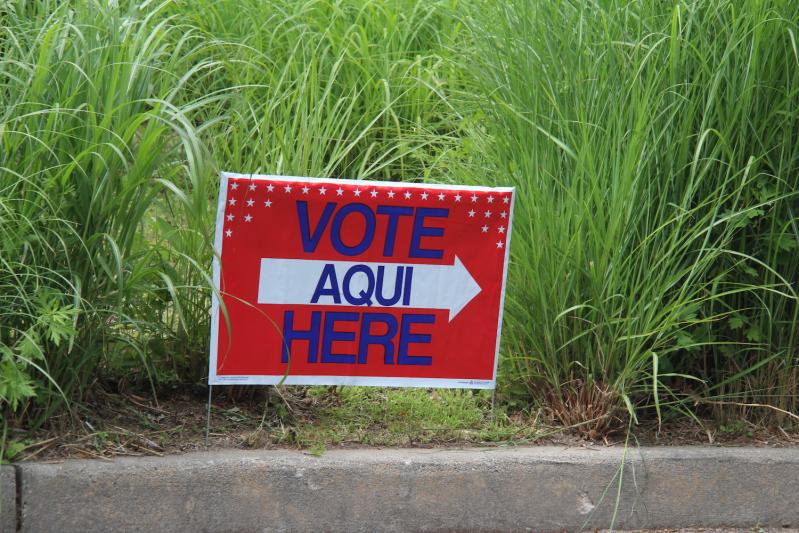 Voter turnout at the polls was low in East Hampton this year.
Durell Godfrey
By Christopher Walsh Christine Sampson

Democrats in East Hampton Town bucked the wider trend on Long Island and beyond on Election Day, maintaining a lock on elected offices by winning large majorities in an election marked by light turnout.

While their Republican and Conservative Party challengers once again fared poorly, three candidates endorsed by the East Hampton Independence Party, Democrats who sought but did not receive their party’s endorsement, fared worse, two of them finishing last in their respective races.

Several hundred absentee ballots had yet to be counted as of noon yesterday, a Suffolk County Board of Elections official said, and 65 votes cast by affidavit will not be counted until Monday, but those votes will not change the outcome of any East Hampton races.

With turnout of just 30.5 percent in the vote for supervisor, the incumbent, Peter Van Scoyoc, won a lopsided re-election victory. He will serve a third term as supervisor after six years as a councilman.

Running on the Democratic and Working Families Party lines, Mr. Van Scoyoc won 17 of the town’s 19 election districts, according to the board of elections’ unofficial results. His challengers, Councilman Jeff Bragman, running on the Independence Party line, and Ken Walles, the Republican and Conservative Party candidate, won just one district each.

Mr. Walles, a businessman who lives in Montauk, won the most votes in District 18, a sprawling district spanning Flamingo Avenue in Montauk west to Napeague Harbor Road. There, he won 115 votes to Mr. Van Scoyoc’s 110 and Mr. Bragman’s 43.

Mr. Bragman, an attorney, won the most votes in District 7, spanning Wainscott from the Long Island Rail Road track south to the Atlantic Ocean. The councilman, who advocated a closure of East Hampton Airport for at least one year, apparently won voters’ affection in that district, besting his competitors with 117 votes to Mr. Van Scoyoc’s 63 and 24 for Mr. Walles.

Elsewhere, Mr. Van Scoyoc ran up the score. In District 2, in the portion of Sag Harbor that is within the town, for example, he won 223 votes to Mr. Bragman’s 102 and Mr. Walles’s 49. Slightly fewer than one-third of that district’s eligible voters cast a vote.

Even in Springs, where the town board’s initial plan to site a 185-foot emergency communications tower on a wooded parcel outraged surrounding residents, Mr. Van Scoyoc won handily in each of the hamlet’s four election districts. His vote total in those districts, 683, bested Mr. Bragman’s 501 votes and Mr. Walles’s 363 votes. Turnout in those districts averaged around 31 percent.

The Rest of the Board

Turnout was even lighter in the vote for two contested seats on the town board, with just under 29 percent of eligible voters casting a ballot. Seats occupied by Councilwoman Kathee Burke-Gonzalez, who won a third term, and Mr. Bragman were contested by five candidates.

Cate Rogers, the former chairwoman of the Democratic Committee, won the most votes, according to unofficial results and pending the count of absentee ballots, with 3,289, or 28.66 percent. Ms. Burke-Gonzalez was close behind with 3,276 votes, or 28.55 percent.

Among the five candidates, Mr. Karpinski won the most votes in Montauk’s District 10, spanning the eastern edge of the hamlet’s downtown to Lake Montauk, and Main Street to the Culloden Shores neighborhood. There, unofficial results showed 209 votes for Mr. Karpinski, 201 for Mr. Aman, 184 for Ms. Burke-Gonzalez, 161 for Ms. Rogers, and 47 for Mr. Whelan.

In the 17-candidate race for the nine-member town trustees, eight of nine incumbents were re-elected, all but one of them Democrats. In a lone bright spot for Republicans, Jim Grimes, who was cross-endorsed by the Democrats and the Conservative Party, was the top vote-getter, according to unofficial results, with 5,182 votes, or 11.06 percent.

David Cataletto, whom the Democratic Committee endorsed instead of the incumbent Rick Drew, finished in fifth place with 7.61 percent of the vote, pending the absentee ballot count. Mr. Drew, running on the Independence Party line, was turned out by voters after three terms, finishing last with 2.79 percent of the vote. The seven Republican candidates were in 10th through 16th place.

On election night, Manny Vilar, chairman of the East Hampton Town Republican Committee, called his party strong in East Hampton, but cited the town’s “heavily Democratic enrollment,” making any campaign an uphill battle for a Republican candidate. “We know by the enrollment numbers,” he said, “that we have more people registered to vote in East Hampton than are year-round East Hampton residents. If we had balanced registration, where you actually had to live here to be able to vote here as opposed to a second home, I think you would see things would be very different. They would be a lot more balanced in the elections.”

Across Suffolk County, where Republicans were more successful, “what we’re seeing is healthy government, healthy elections, where each side has a message,” Mr. Vilar said. “They’re trying to get a point across. I think we’re seeing that Suffolk County is a lot closer to the center than it is to the left.”

Jerry Mulligan, chairman of the Democratic Committee here, wrote in an emailed message on Monday that his party’s sweep “was the result of a lot of dedicated hard work and the persistent efforts of our 38-member committee and our many volunteers.”

“We are proud that our team ran a positive campaign that stayed focused on the accomplishments of our candidates,” Mr. Mulligan wrote. “The election results make it clear that East Hampton voters appreciate what the town board and trustees are doing and want them to continue their work to protect the East Hampton we all love.”

“As the town board and trustees get back to work, we on the committee will prepare for the approach of hugely important regional and federal elections in 2022.”