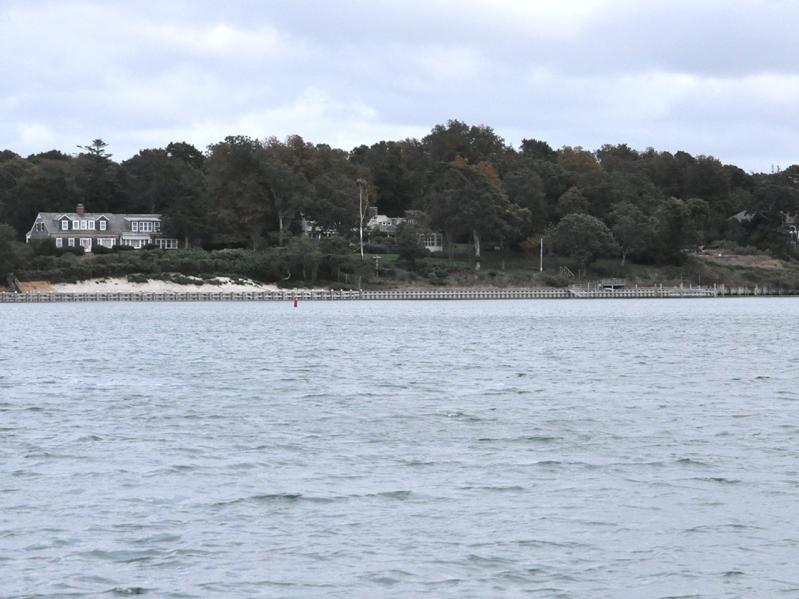 In a split vote, the town trustees okayed new private dock, the first in decades, on the eastern shore of Three Mile Harbor in East Hampton.
David E. Rattray
By Christopher Walsh

After a contentious debate and many months after the application was submitted, the East Hampton Town Trustees voted 5 to 3 on Monday to approve construction of an 80-foot floating dock on Three Mile Harbor, the first such approval in more than three decades.

The trustees had repeatedly tabled the application while trying to establish a policy on docks covering all water bodies. On Monday, the delay prompted Francis Bock, the trustee clerk, to demand the speedy formation of a committee to study the matter and issue a recommendation.

The trustees banned applications for docks in most waterways under their jurisdiction in 1984. Three years later, the prohibition was extended to all but the eastern shore of Three Mile Harbor.

John McGinn and Cary Davis have long sought the trustees' permission to construct a dock at their bulkheaded property at 275 Three Mile Harbor, which is near East Hampton Point Resort. It would require driving 13 pilings, each eight inches in diameter, into the bottomland. They have permits from the State Department of Environmental Conservation and the federal Army Corps of Engineers, said Richard Whalen, their attorney.

Some trustees objected that allowing the dock would set a precedent, leading to a flood of similar applications. Oysters seeded by the town's shellfish hatchery are typically found in the area in question, raising concerns about impacts to their habitat.

The applicants have pledged to participate in the town's residential oyster-gardening program, which is intended in part to improve water quality, and have offered further mitigation measures, including paying to seed the waters with shellfish and promising not to install a bulkhead or seek a dock at an adjacent property that they own.

The trustees debated, sometimes angrily, during Monday's virtual meeting. Tim Garneau was the first to come out against the dock. The applicants can moor a boat at any of the numerous nearby marinas, he said, arguing for a moratorium on docks in Three Mile Harbor.

Jim Grimes disagreed. "This board, after the vote on this, could decide there are no new docks in Three Mile Harbor," he said. "Future boards would have the ability to undo and change that, but this applicant has offered as mitigation to put a covenant on that property next door. It would not matter what future boards do." Granting the dock would not set a precedent, he said.

A moratorium, said Bill Taylor, should be looked at as a separate issue. Both he and Mr. Grimes voted to approve the application.

As she had in previous discussions, Susan McGraw Keber stated firm opposition to allowing the dock. The dock and pilings, she said, would present another obstruction in the harbor. "My responsibility is to the community and the oath I took to preserve and protect our waterways," she said.

John Aldred also voted no. "From the beginning, I was very skeptical about this," he said, "primarily for the reason that this is an area that's been seeded by the hatchery, harvested for 10 -- now, I believe, 11 -- years. If we can't say no to a dock in a viable shellfish area, we will have a very hard time saying no to any dock in Three Mile Harbor. I also agree with the precedent issue for that reason."

A future board could undo a moratorium, Mr. Aldred said, "but what a future board can't do is force anybody to take out a dock. If this goes in, this dock will be here in perpetuity and be a de facto -- or seen by the general public as -- privatization of this general area. I agree with Susan that our task here is to steward our lands and the harbors for everybody in town."

Mr. Bock said he had struggled to reach a decision on the application "from the day it came in," but had reached a conclusion. "For the past 35-plus years there has not been a ban in this area. Any board could have put the ban in place, and then the entire harbor would be sterilized. If we didn't want a dock there, it was incumbent on us to sterilize that area. We haven't." He would vote yes, he told his colleagues, "but I think if we really want to stop the continuation of docks in this area, you guys next week better come up with a plan."

Rick Drew said that he, too, had struggled to reach a decision, but that "it's important for the board to be consistent." He had spoken against aspects of the South Fork Wind Farm, he said, and the trustees had nonetheless approved the project, which will see multiple pilings driven into the seabed at Cox's Ledge, "with a permanent scour area of over 300 acres, basically the size of Three Mile Harbor." How could the trustees say they want to protect the marine environment, he asked, having voted to approve that project? He voted to approve the dock.

Ben Dollinger, who joined the meeting in progress, also voted to approve. Mike Martinsen did not attend the meeting.

"I want to see a dock committee created tonight," Mr. Bock said after the vote. Mr. Aldred, Mr. Drew, Mr. Grimes, and Mr. Taylor agreed to be its members.