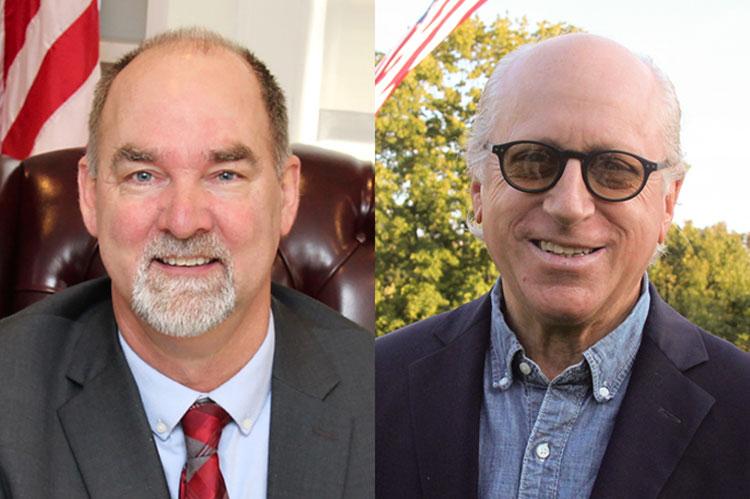 Two of the three candidates for East Hampton Town supervisor sparred anew at last Thursday's virtual debate hosted by the League of Women Voters of the Hamptons, Shelter Island, and North Fork.

The incumbent, Peter Van Scoyoc, and his opponent, Jeff Bragman, have sharply criticized each other throughout much of the latter's single, four-year term as a member of the town board. Mr. Van Scoyoc is running on the Democratic and Working Families Party lines; Mr. Bragman, a Democrat, is running with the backing of the East Hampton Independence Party. He sought endorsement from the East Hampton Democratic Committee for a second term but did not receive it, then forced a Democratic primary for supervisor but lost.

Ken Walles, the Republican and Conservative candidate, refused to participate in virtual debates. He and his running mates said that they would participate in debates only in person.

The participating candidates differed on mandating Covid-19 vaccination for town employees. "I support mandatory vaccination," Mr. Bragman said. "I would support it in Town Hall, I don't see why not." Precedent in the United States Supreme Court "has been very favorable to mandatory vaccinations in epidemics," he said. "But somehow, we live in an age where the social contract seems to have been severed. I think that leaders of good conscience and strong resolve might agree that it is a good idea to mandate masks. If I were supervisor, I'd be advocating for mandatory vaccinations. It only makes sense. We want to get out of this."

Mr. Van Scoyoc said he would defer to public health officials' recommendations. "I do think, especially in certain circumstances, wearing masks indoors is very prudent" and should continue, he said, arguing for vaccination as well. "Unfortunately, there has been so much politicization of this pandemic. We would have fared so much better if there hadn't been that dynamic."

On East Hampton Airport, over which the town has regained control with the September expiration of federal grant requirements, Mr. Bragman has proposed an "air traffic holiday" of at least a year, during which commercial aircraft, helicopters, and jets would be prohibited. "During that time," he said, "we have to protect Montauk," a reference to concerns that closing East Hampton Airport would divert traffic, particularly helicopters, to the smaller, privately owned facility.

East Hampton Airport would be open to local pilots and accessible to other aircraft in emergency situations, Mr. Bragman said. "We could adjust how we manage traffic as we move along. When we have local control, we have authority to do that, and can be nimble." The priority, he said, was to provide relief to residents whose quality of life has been impacted by incessant aircraft noise, particularly in the summer. "We finally have the tools where we can control it. The best way to start is with a pause."

Mr. Van Scoyoc, who has called Mr. Bragman's yearlong proposal reckless, has proposed a temporary closure, perhaps early in 2022 when air traffic is light. Citing the town's airport consultants' study, he said that 34 percent of traffic would be diverted to Montauk in the event of East Hampton's closing. "Solving a problem in one part of town only to displace it to another part of town is no solution at all," he said. The "out-of-control" airport has grown beyond the footprint desired by the community, he agreed, but argued for "a more deliberative and rationed and reasoned approach."

Mr. Bragman asked for a rebuttal, saying that the curfews Mr. Van Scoyoc has spoken of would not help. "Then, he moved closer to my plan," speaking of certain aircraft types that would be prohibited. "What aircraft would you control?" he asked. "He won't say because he's taking money from airport interests, and he's got a foot in both sides of this issue. He's unwilling to make a clear stand on which aircraft he would allow and which he won't."

On climate change, Mr. Van Scoyoc touted the Accabonac solar plant, the town's Energize East Hampton program, a revision of the code regarding residential solar installation, LED lighting in downtown Montauk, the transition of the town's vehicle fleet to electric models, and the installation of charging stations. "We have to do every single thing we can to meet this crisis," he said.

He also noted that Mr. Bragman voted against the easement agreement with the developers of the South Fork Wind farm, abstained from voting on the related host community agreement, and opposed the South Fork Peak Savers load relief program, which commits the town to operate standby emergency generators during peak-demand periods in the warmer months. He said Mr. Bragman had "pushed back" on electric-vehicle charging stations in downtown Montauk "because he was concerned that somehow the brand name on it would be advertising for a large corporation."

"It's just not true that I opposed E.V. chargers, and it's just not true that I opposed wind power," Mr. Bragman responded. "You know it and I know it." Before voting in favor of charging stations, "I insisted that they put in universal chargers that didn't have the Tesla sign, because I didn't want to convert Montauk into a Tesla car dealership or indicate that a high-end automobile company was the way to solve our energy crisis."

He criticized the load relief program, which he said was "trading fossil fuel for fossil fuel" and "didn't enhance our renewable energy at all." He supports wind power, he said, but "what my opponent didn't like was that I also supported an environmental review of the project."

The candidates also clashed on community choice aggregation, or C.C.A., which allows a local government to procure electricity and/or natural gas on behalf of its residents, businesses, and municipal accounts from a provider other than the usual utility. "They've had a disregard for community choice aggregation," Mr. Bragman said of his colleagues on the board. "For some reason, East Hampton is two years behind on getting involved in it, and we haven't even joined up as of today."

"There's no way you can have C.C.A. on Long Island because of the onshore generation requirements" of the state's Independent System Operator, Mr. Van Scoyoc said. "That's going to require additional legislation in order to allow that." East Hampton is not behind the curve, he said  — "We're leading it."

(On Oct. 13, Southampton Town awarded a contract to Kearsarge Energy to construct and operate an approximately 4.5-megawatt community solar installation. The town refers to it as a community choice aggregation/community distributed generation project, which will pay the town an annual lease payment and a one-time payment from its C.C.A. administrator, and allow a 10-percent monthly energy bill credit to participating residents.)

A question about cellphone service in Springs brought another clash between the candidates. The pandemic and the resulting influx of new residents exacerbated existing gaps in both coverage and capacity, Mr. Van Scoyoc said. He convened a wireless communications committee to address it, and the town hired a consultant. The town has since allowed Verizon to install a tower on Stephen Hand's Path in Wainscott and AT&T to do the same in Northwest Woods.

Negotiations with a leaseholder at the Girl Scouts of Nassau County's Camp Blue Bay in Springs are nearing a conclusion, Mr. Van Scoyoc said, which would allow the town to erect a pole for both emergency communications and personal wireless antennas, completing an upgrade of the former and bolstering coverage of the latter. "We believe we will reach agreement soon," he said.

Mr. Bragman attacked the supervisor for the town board's initial plan to erect a 185-foot pole in a wooded area surrounded by residences in Springs. With an election nearing, "the board on its own decided it would plunk a tower" in that neighborhood, he said. "Neighbors were obviously very concerned about it. I raised the issue that it might be important to tell them what was going on. Instead, they just put it on a work session and started talking about it."

Neighbors were indeed outraged at the plan and campaigned to stop it. Word of the controversy eventually reached a Girl Scouts official, and once-abandoned negotiations were renewed. "The fact is, Camp Blue Bay was a better location," Mr. Bragman said. "I was able to find a solution that hurt no neighborhood and got us in an optimal location. Why? Because I listened to people." The board had made a poor decision "under my opponent's leadership," he said.

"I totally disagree with that characterization," Mr. Van Scoyoc said. "We did engage the community by having work sessions. That is the process." The board "invited the community in," he argued, while "up against the wall in trying to complete a town-wide emergency communications system," with Springs underserved in both emergency and wireless communications. "We looked at all potential sites, every location that could hold a cell tower site. This property came up. I never suggested it had to go there."

Election Day is Tuesday. Early voting continues through Sunday at Community Room 2 at Windmill Village, at 219 Accabonac Road. The hours today are 8 a.m. to 4 p.m., tomorrow from noon to 8 p.m., and from 10 a.m. to 3 p.m. on Saturday and Sunday.