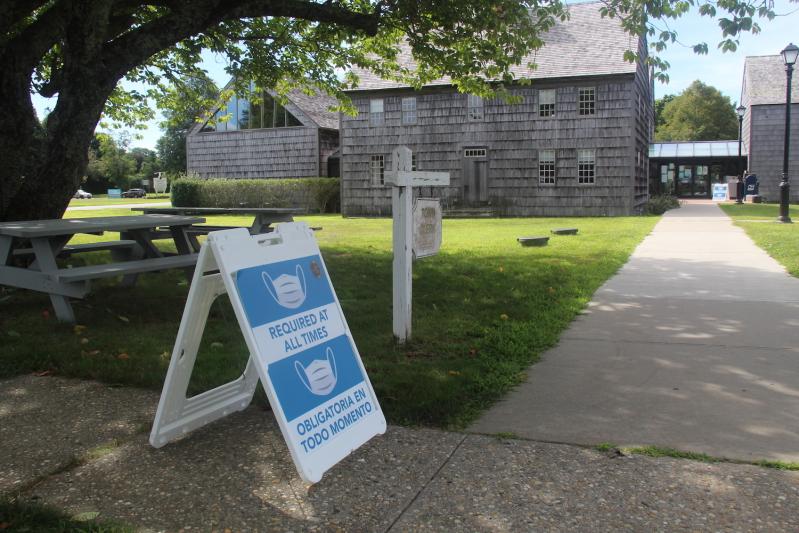 On masking and vaccination requirements during the Covid-19 pandemic, none of the Democratic or Independence town board candidates favored mandating vaccination for town employees or to attend indoor events.
Durell Godfrey
By Christopher Walsh

There is little daylight between the three candidates for East Hampton Town Board who participated in last Thursday's debate hosted by the League of Women Voters of the Hamptons, Shelter Island, and the North Fork.

Councilwoman Kathee Burke-Gonzalez, Cate Rogers, and John Whelan answered questions on multiple issues posed by Estelle Gellman of the league for around 45 minutes. Ms. Burke-Gonzalez, who is seeking a third term on the board, and Ms. Rogers, the former chairwoman of the East Hampton Town Democratic Committee, will appear on the Democratic and Working Families Party lines on Tuesday's ballot. Mr. Whelan, a Democrat who sought but did not receive the party's endorsement, is chairman of the town's zoning board of appeals. He will appear on the Independence Party line.

George Aman and Joe Karpinski, the Republican and Conservative Party candidates for town board, did not participate in the virtual debate. They spoke at an East Hampton Town Republican Committee candidates' event held on Sunday at the American Legion Hall in Amagansett.

On the future of East Hampton Airport, over which the town regained control with last month's expiration of longstanding obligations tied to federal grant money:

Ms. Rogers advocates "a holistic approach." What must be addressed immediately "clearly is the noise," she said, as well as the airport's carbon footprint. She would like to see a temporary closure of the airport followed by a "transition to what town residents want. From what I hear, they want to greatly reduce commercial traffic." She also supports restrictions on helicopters and jets and the town's acquisition of the privately owned Montauk Airport. "I also think we need to take care of the rest of the property," she said, citing the sole-source aquifer and endangered species.

Mr. Whelan supports the town's work with airport consultants toward a reimagining of the property. He would like to see major decisions on both the airport and a new senior citizens center postponed until a new board is in place following the election. But he supports a temporary closure and the enactment of "very strong" legislation that would withstand challenges before a reopening, with prohibitions on helicopters, jets, and commercial traffic. He also supports shortening runways, revegetation, and a solar energy farm at the site, as well as the town's acquisition or condemnation of the Montauk Airport property.

In her first term, Ms. Burke-Gonzalez was the board's liaison to East Hampton Airport when it enacted curfews in 2015 on aircraft deemed noisy; they were struck down in a 2016 federal appeals court ruling. "Because we are free of F.A.A. regulations," she said, "now is the time to act." But "putting a ban on all commercial flights, or all helicopters, will cause diversion" to Montauk, with an estimated 34 percent of takeoffs and landings going there if East Hampton were closed.

"We need to thread the needle, put restrictions in place that will give meaningful relief." She proposes a suite of restrictions at East Hampton following its temporary closure, "and then monitor what happens in East Hampton and Montauk."

On masking and vaccination requirements during the Covid-19 pandemic, none of the candidates favored mandating vaccination for town employees or to attend indoor events.

"For now, I would defer to what the board is doing," Mr. Whelan said. "I look forward to transitioning back" to in-person meetings, he said, as that "adds a whole other level of involvement with the community." As Z.B.A. chairman, "we miss it." A return to in-person gatherings should be based on numbers and follow health officials' guidelines, he said.

Ms. Burke-Gonzalez called herself a strong supporter of the existing mask requirement at Town Hall, and said that social distancing is practiced at any in-person meeting.

Most residents understand the need for masking and distancing, Ms. Rogers said. She agrees with a requirement for wearing a mask indoors. "Anything that can save a life is important," she said. She is not in favor of mandatory vaccinations, citing a high percentage of residents who are already vaccinated.

On maintaining the town's character and protecting against overdevelopment:

Ms. Burke-Gonzalez suggested new laws that would save larger trees, citing a recent instance of clear-cutting on a residential parcel. "When we had a meeting of all department heads at the end of September that I ran, department heads were just baffled by people clear-cutting," she said, and a committee comprising the town attorney's office and the Building and Natural Resources Departments was formed to look into it.

"It is time to look at our code," Ms. Rogers said. As a former vice chairwoman of the zoning board of appeals, "one frustrating thing is when someone goes outside the permission given, and you're left with a revegetation plan that will take decades to come back to what they took away." She favors legislation to protect trees, and not simply to restrict clearing. "I'd also like to see an inspection after clearing and before a foundation is poured."

Mr. Whelan noted his two years representing the town at the Suffolk County Planning Commission. "We were trying to curb development at the county level," he said, and he took credit for convincing planning commissioners to deny a developer's proposal to construct market-rate senior citizens residences at 555 Montauk Highway in Amagansett.

"We deal with this every week" on the zoning board, he said. "We are getting filled up here. We need to allow for affordable housing," but not where it would displace prime agricultural soil or woodlands, he said. "We should start, right away, making it more expensive for out-of-town visitors," as has been discussed by the town board via a resort tax or increased permit fees.

On the acute shortage of affordable housing and the recently enacted state law authorizing the five East End towns to establish a community housing fund using a .5-percent tax on real estate transactions:

Ms. Burke-Gonzalez said that the fund could be used for down payment assistance for first-time homebuyers, for the purchase of properties on which to build affordable housing, or to offset construction costs. It is "a real win for our community," she said.

Ms. Rogers, noting that authorization to create the fund is subject to a mandatory referendum, encouraged residents to vote yes when it is presented. Having the flexibility to build and offer residents both rental and ownership opportunities is important, she said, "and, particularly for work-force housing, being able to rehabilitate existing buildings" is key to addressing the housing shortage.

Mr. Whelan, who is an associate with the American Institute of Architects and has a master's degree in architecture from the Virginia Tech College of Architecture and Urban Studies, said that he looked forward to working with the directors of the East Hampton Housing Authority and the town's Office of Housing and Community Development, "and trying to open the process of design" to involve local architects, planners, and landscape architects. "I understand big projects," he said. "A major part of my candidacy is what I can bring to the table" on housing.

On helping businesses return to normalcy after the pandemic, the candidates all said that it is part of the larger topic of housing. "One of the major issues for businesses in town, particularly restaurants and hotels, is being able to find staff," Ms. Rogers said. "Supporting work-force housing is one way to support businesses." Like the other candidates, she favors continuing to allow outdoor dining, as was begun last year.

"East Hampton as a town has to turn a page," Mr. Whelan said, "and realize we are not the town we were when I grew up here." Affordable housing "comes into play," he said, "whereby we want locals to stay" and be able to find employment. He advocates jobs in the solar, wind, and other renewable energy industries, as well as with local farms.

The town board established the business recovery committee in response to the pandemic, Ms. Burke-Gonzalez said. "We felt we needed to have a pulse on what they were going through, and needed to better understand the challenges." Outdoor dining has proven successful and should be more accessible to restaurant operators, she said. Some business leaders have spoken about establishing seasonal housing for staff, she said, adding that the South Fork Commuter Connection, which recently resumed, has helped employees, including of the town, get to work from points west.

The candidates agreed on the need to upgrade emergency and personal wireless communications service in Springs. The apparent progress in negotiations with the Girl Scouts of Nassau County and American Tower, which holds a lease at the Girl Scouts' Camp Blue Bay, is expected to resolve both emergency and wireless communications with the placement of a tower to house the necessary equipment.

The candidates also agreed with the town board's decision to opt out of allowing adult-use retail sales and on-site consumption of cannabis. The board intends to revisit the issue in 2022, possibly opting back in once a regulatory framework has been set.