As Van Scoyoc and Bragman trade barbs, Republicans sit out virtual debates
The East Hampton Star is providing free access to election 2021 coverage. Your visit will not count against the 10-article monthly limit for nonsubscribers. 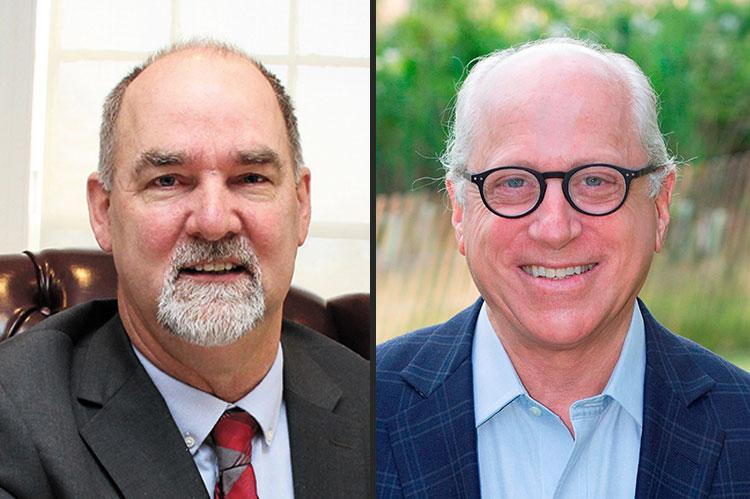 During two virtual events broadcast on LTV this week, East Hampton Town’s Democratic Supervisor Peter Van Scoyoc and Councilman Jeff Bragman, who is challenging him on the Independence Party line, disagreed with and sharply criticized each other on several topics as both described a town in a near-existential crisis as the Covid-19 pandemic brought ever more traffic, noise, density, pollution, and moneyed entitlement, pushing the rest to the margins if not out of town entirely.

Separately, Councilwoman Kathee Burke-Gonzalez, Cate Rogers, and John Whelan were largely in agreement on the issues discussed. Mr. Whelan, a Democrat, sought but did not receive the party’s endorsement; he is endorsed by the East Hampton Independence Party. Ms. Rogers is the former chairwoman of the East Hampton Democratic Committee. Ms. Burke-Gonzalez is seeking a third term.

The Republican candidates in the Nov. 2 election would have had an opportunity to present their critique of the governing Democratic supermajority had they taken part in Monday’s debate hosted by the East Hampton Group for Good Government or the East Hampton Village Improvement Society’s Conversations With the Candidates, recorded last week and aired on LTV in recent days.

The party’s candidates have opted not to participate in virtual debates, the chairman of the East Hampton Town Republican Committee said last month. Ken Walles, the Republican candidate for supervisor, wrote in a recent letter to The Star that “I will not participate in a Zoom debate, for I don’t consider that a debate.” He proposed an in-person event, outdoors if need be. The events’ hosts, citing the continuing high rates of Covid-19 infection at the town’s testing sites, said that an in-person debate was unsafe.

A “great sense of unease and loss” is pervasive in the town, which is “at a tipping point,” Mr. Bragman said. “I sense it very clearly when I talk to people.” The houses are bigger, the parties are louder, and the “local community is smaller and smaller,” he said. He criticized Mr. Van Scoyoc regarding the town’s protracted dispute with the owner of Duryea’s Lobster Deck in Montauk, accusing the supervisor of “letting him skate through the zoning code” to legalize multiple code violations, and in his handling of a plan, now on hold, to site a 185-foot emergency communications tower in a wooded area in Springs, to which neighbors furiously object.

“I’m disappointed,” Mr. Van Scoyoc said, that “right out of the gate” Mr. Bragman was “trying to cast aspersions on my character rather than addressing the issues.”

“We have seen dramatic change here,” Mr. Van Scoyoc said, and “we absolutely must be very careful about how things proceed,” he said, referring to protection of water quality, the broader environment, and the town’s rural character, and the need to “offer opportunities for local people to continue to stay in this community.”

“We need to stand strong and stand up as a small community,” Mr. Bragman said. “We have to recognize that we’re a small town, and we have to control what we can control to keep things calm and quiet.”

The future of East Hampton Airport was the top issue among those who submitted questions, said the Group for Good Government’s Arthur Malman, who served as moderator on Monday. With last month’s expiration of federal grant assurances, the town can regain control of the airport by closing and reopening it, likely with new restrictions and curfews in place. Many residents have pleaded with the town board to close the airport permanently, though others advocate its continued operation.

Mr. Bragman referred to his letter to the editor in last week’s issue of The Star, in which he called for imposition of an “air traffic holiday of at least an entire year” during which all jet, helicopter, and seaplane flights could be prohibited, allowing the town time to evaluate impacts.

Mr. Van Scoyoc said that such a move would be “no holiday for Montauk,” where residents of that hamlet fear that the small, privately owned airport would absorb many flights diverted from East Hampton. Further, he said, while it cannot continue as is, closing the airport “before we know what we’re doing” would be “reckless, dangerous, and ill-advised.” He proposed an immediate imposition of curfews, adding that a sunset-to-sunrise curfew is already in place in Montauk, so traffic could not be diverted there during those hours. “We can take steps immedi-ately while we decide about diversion and other substantive issues.”

“It’s impossible to swear nothing is going to happen to Montauk,” Mr. Bragman said, complaining that Mr. Van Scoyoc was misstating his position, “but we can keep an eye on it.”

There are many variables in the complex issue, Mr. Van Scoyoc said. But “people want to get here by air. They will find a way to get here by air.” If helicopter flights are limited at East Hampton Airport, “there will be diver-sion to Montauk,” and they will fly “over the spine of the town,” impacting the entirety of the town, he said. He has had discussions with Montauk Airport’s owners, he said, describing “positive movement” and optimism that the question of diversion will be resolved.

“But meanwhile you’re not going to do anything about helicopters!” Mr. Bragman interrupted.

Mr. Bragman said that the town code regarding special events permits could be changed to “stop rock concerts masquerading as parties” at private events. “We have to be tough, say no to people, and change the way we do business” to preserve residents’ quality of life. “When somebody holds a rock concert for 500 in Amagansett” — the billionaire Michael Novogratz hosted a midsummer concert by the singer Miley Cyrus on his property — “and a constituent says they could hear the music on Marine Boulevard, something is wrong with our code.” He also criticized the special events committee’s approval of a 30-piece marching band at a residential property.

“My opponent would like to decide ahead of time who’s allowed to play at your party and who’s not,” Mr. Van Scoyoc said, adding that “I don’t think that kind of government intervention is correct.” The town has “said no to many outside organizations that wanted to come here and use our town as a venue.” But Mr. Bragman was even against the use of the Amagansett field purchased by the town with community preservation fund money for the East Hampton Library’s annual Authors Night fund-raiser, he said. “What we really critically need to do at this time . . . is figure out how to work around the income inequalities that really have negatively impacted the ability for local people to stay in our town.”

The candidates also clashed on Medivolve, the company contracted to provide coronavirus testing at sites in East Hampton and Montauk. A California newspaper reported last month that the state’s Health Department is investigating Medivolve, which also operates testing sites there, and that Sonoma County officials are urging residents to be tested elsewhere after numerous complaints about its test results and billing practices.

Medivolve is “fly-by-night,” Mr. Bragman said, and was “doing a lousy job. And we didn’t do much about it until we quietly hired another firm.” The town announced a partnership with CareONE Concierge to provide P.C.R. saliva testing for Covid-19 at the former Child Development Center of the Hamptons on Oct. 4.

Mr. Bragman, the supervisor said, is “always quick to criticize, but has he ever initiated any effort to find another company? No.” Asked, during the Village Preservation Society’s event, about his biggest accomplishment as supervisor, Mr. Van Scoyoc said that that it was “getting us through the pandemic,” citing the assembly of a vaccine site and volunteers to staff it, the town’s high vaccination rate, and its positive infection rate, which is the third lowest per capita among Suffolk County’s 10 towns.