They will ‘make their point until someone is arrested’ 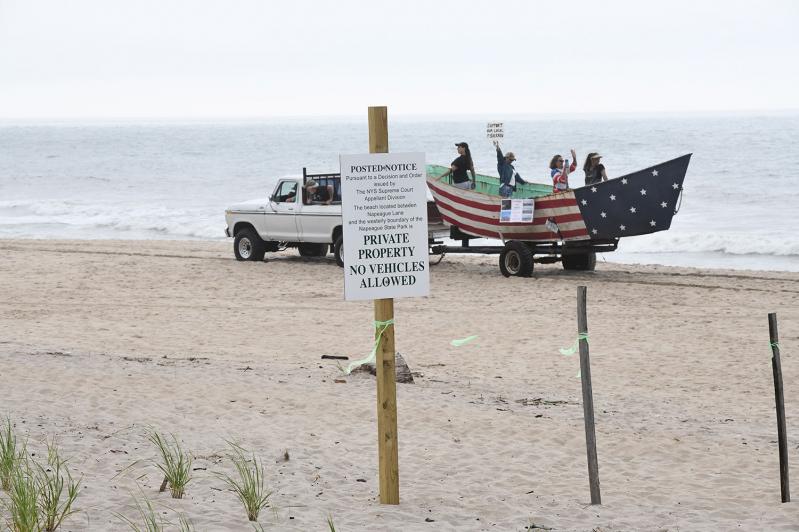 The red, white, and blue dory once owned by the bayman Dan King was part of a caravan of 39 trucks that drove on a stretch of ocean beach at Napeague, on June 27, to protest a court decision that the beach is privately owned.
Doug Kuntz
By Christopher Walsh

East Hampton Town baymen are planning a second act of civil disobedience on Sunday morning at a stretch of ocean beach on Napeague commonly known as Truck Beach, protesting, as they did in June, a New York State Supreme Court Appellate Division panel’s decision that the section of beach is owned by landward property owners and that residents have no inherent right to drive or park vehicles there.

“The baymen are planning an event,” Daniel Rodgers, an attorney representing several of them, told The Star. “Going forward, they have alerted all interested parties to continue to use the beach as normal, on a daily basis as well as weekends. They intend to make their point until someone is arrested.”

The Appellate Division’s decision, issued in February, overturned a 2016 State Supreme Court decision that an 1882 deed in which the town trustees conveyed some 1,000 acres on Napeague to Arthur Benson had reserved rights to town residents, including some public use. A June 4 injunction reiterated the Appellate Division’s decision, and signs and barriers posted at the beach informed people of the decision and barred vehicle access this summer.

Last month, the New York State Court of Appeals, the highest court in the state, rejected an effort by the town and the town trustees to reconsider the February ruling, seemingly ending a legal fight dating back to 2009, when several property owners associations asserted their ownership of the 4,000-foot stretch of beach in parallel lawsuits brought against the town and the trustees. The chains of title to their respective properties, they claimed, extend to the mean high-water mark of the ocean per the 1882 deed.

The since-overturned 2016 decision agreed with the town and trustees’ contention that even if the homeowners associations established their respective title claims, the town nevertheless retained the right to allow the public to operate and park vehicles along the entire beach based on a reservation contained in the Benson deed. The clause at issue “reserved to the inhabitants of the Town of East Hampton the right to land fish boats and netts [sic] to spread the netts [sic] on the adjacent sands and care for the fish and material as has been customary heretofore on the South Shore of the Town lying westerly of these conveyed premises.”

“It would appear that if a party were to be arrested and charged with criminal trespass,” Mr. Rodgers said in an email, “the case would land in the East Hampton Justice Court and a final decision/determination can be made as to the legality of the easement granted to residents of the Town of East Hampton. It appears that most people failed to recognize that the Court upheld a reservation (property right) that the homeowners tried to have declared extinguished.”

On June 27, baymen and their supporters drove a caravan of 39 trucks onto the beach to assert what they believe is their right. The move was the latest in the long-running disagreement pitting commercial fishermen and residents who have recreated on the stretch of ocean beach for generations against the landward property owners who portrayed a dangerous environment with hundreds of vehicles weaving through crowds and children at play.

Using public benefit as justification, town officials may move to initiate eminent domain proceedings, in which the shorefront between the mean high-water mark and the toe of the sand dunes would be condemned and the property owners paid fair market value, as was planned before the 2016 decision affirming the public’s right to access the beach. As of Tuesday afternoon, more than 49,000 people had signed a petition supporting condemnation on the Facebook page of the group Citizens for Access Rights.

In response to a question, during a candidates debate on Monday, as to whether the town should try to negotiate a compromise with the landward property owners to allow vehicle access to beaches on a limited basis, Supervisor Peter Van Scoyoc said that “We need to hold the line” on public access to the town’s beaches, and complained that the Appellate Division panel’s decision “did not address a number of substantive issues.”

Councilman Jeff Bragman said at the debate that he would be willing to talk with property owners, but “I’m not sure you’re going to have a lot of give on their side. I think it will come down to us using condemnation.”