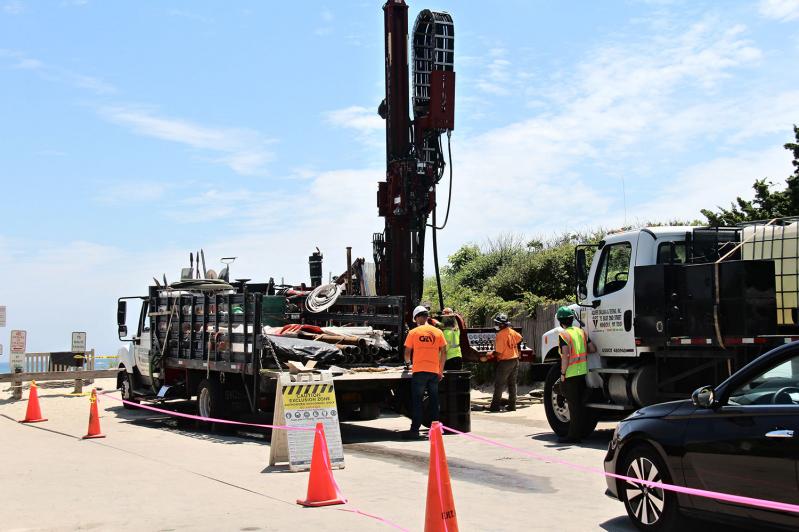 In June, Orsted and Eversource Energy completed a test boring at Beach Lane in Wainscott to determine whether conditions were suitable to land the proposed South Fork Wind export cable there.
Durell Godfrey
By Christopher Walsh

The Town of East Hampton and the town trustees will share a community benefits package worth almost $29 million in exchange for easements allowing Orsted U.S Offshore Wind and Eversource, partners developing the proposed 15-turbine South Fork Wind project, to land the installation's export cable and bury it on a path to the Long Island Power Authority substation in East Hampton.

Tuesday's town board work session made clear that the board and trustees have agreed -- although not unanimously -- with the developers that the ocean beach at the end of Beach Lane in Wainscott is the export cable's most suitable landfall location. A town announcement on Thursday that a draft agreement had been reached made this official.

"Wainscott is the most appropriate landing site for the terrestrial portion," Supervisor Peter Van Scoyoc said during the long discussion.

That decision has infuriated many residents of that hamlet, as well as most commercial fishermen in the town, though the site has equally impassioned support of other Wainscott residents, one of whom called in twice to Tuesday's virtual meeting.

While the proposed wind farm, to be situated about 35 miles off Montauk, remains the subject of settlement negotiations before the New York State Public Service Commission, which along with other permitting agencies will have to issue a Certificate of Environmental Compatibility and Public Need under Article VII of the Public Service Law authorizing the construction and operation of the export cable, the town and trustees' outside counsel have all but finalized terms of the host community agreement as it pertains to the terrestrial portion of the installation.

As of Tuesday afternoon, Orsted and Eversource had yet to sign off on a final draft agreement, but its broad outlines, following some two years of discussions, were enumerated at the work session.

Orsted and Eversource will pay the town and trustees $500,000 within 90 days of the agreement's execution, John Jilnicki, the town attorney, said. A second $500,000 payment will be made within 90 days of the start of construction. Subsequent to those "milestone" payments, the developers will make the first of 25 installment payments within six months of the wind farm's becoming operational, starting at $870,000 and with a 2-percent escalation each year.

The installment payments will total about $27.866 million, Mr. Jilnicki said. Adding the two $500,000 milestone payments "brings it to a little under $29 million in payments to the town and trustees," he said. An initial offer, when discussions among the town, trustees, and developer began, were for a community benefits package worth $8 million.

The developers will also "attempt to locate a suitable property in Montauk to be used by the turbine maintenance contractor," Mr. Jilnicki said, "provided they could obtain property in Montauk at a commercially reasonable term," and also provide a crew transfer location for vessels. The developers will also employ a liaison to the commercial fishing industry.

John Wagner, an outside counsel for the town, told the board that the agreement incorporates "project access agreements" consisting of an easement agreement between the town and the developers regarding the laying of the cable within town-owned roadways between the beach and the substation, off Cove Hollow Road. In addition to the primary "transmission easement," allowing the cable to be installed and remain under town roads for 25 years after the commercial operation date, a separate "temporary installation easement" will exist only during construction. That agreement, Mr. Wagner said, provides for coordination with the superintendent of highways as to matters such as delivery of materials during construction.

Other conditions include provisions for the hours in which construction can take place, noise restrictions, handling of hazardous waste, protection of wetlands and animal and plant life, and decommissioning and restoration of property at the end of the agreement, Mr. Wagner said.

The agreement incorporates many of the concepts that will be included in the Certificate of Environmental Compatibility and Public Need, Mr. Wagner said, albeit modified "in a way that is to the interest of the town." The town is "in the driver's seat" with respect to monitoring and enforcing provisions.

Though easements would take effect immediately, they cannot be acted upon until all of the project's required state and federal permits have been issued, Mr. Wagner said.

The trustees have a separate land-lease agreement, he added; it and the town's easement agreement are incorporated in the host community agreement and are mutually dependent on each other.

Francis Bock, the clerk of the trustees, would only say that "we are close to an agreement" when contacted last week. "There are still some details to be ironed out," he said. "It seems to me those items can be handled in a reasonably short time."

In answering a question from a caller, Mr. Van Scoyoc said that the town and trustees would evenly divide the milestone payments, which would cover the costs "and then some" of the respective outside counsel retained for negotiations with the developers. He indicated that both bodies would allocate the installment payments to environmental initiatives on lands and waters under their respective jurisdictions, with the town also directing money toward renewable energy and energy efficiency initiatives, and perhaps "other such projects that benefit the community and protect public health."

Councilman Jeff Bragman was less sanguine than his colleagues, noting that in accepting the host community agreement, "we are settling the question of whether Beach Lane is the right place to land this cable. It will be a done deal in front of the Public Service Commission." That the commission will presumably issue a Certificate of Environmental Compatibility and Public Need "doesn't address whether that's appropriate at this stage."

Further, he said, "a process that permits a developer to offer community development often has the effect of distorting the planning process and, I think, weakening the planning process." Of the almost $29 million in benefits, "I don't like to see it mixed in when we're supposed to be considering environmental impacts," he said. Moreover, the matter was "coming in front of the board with very little notice to the public."

Mr. Van Scoyoc noted that he has made multiple mentions of an agreement drawing near over several weeks, at town board meetings and on LTV. "This is that rollout, if you will," he said of Tuesday's discussion. "We will have another work session on it next week," on Tuesday. "We have had a great deal of discussion in the community."

The seven residents who called in to the meeting offered more evidence that the public was aware of the status of negotiations with the wind farm's developers, he said later.

"We are pre-deciding the most significant issue of local impact by saying Beach Lane," Mr. Bragman said, and again referred to the "enormous influence" and "persuasive value" of the benefits package. To decide "this most controversial, directly impacting issue" will render the Public Service Commission's approval a foregone conclusion "because you've taken any alternatives off the table."

In fact, said Eli Eilbott, also part of the town's outside counsel on the agreement, that the host community agreement is nearing resolution "does not remove the issue from the Public Service Commission's consideration." Testimony is due in the case tomorrow, "and I have every expectation there are parties that will file testimony stating their views about the appropriateness of the Beach Lane landing."

The public will have "ample opportunity" to examine and weigh in on the agreement, Mr. Van Scoyoc said. "A large portion of the public supports not only the project but the landing site as the best in the town."

South Fork Wind, initially proposed by the Rhode Island company Deepwater Wind as the 90-megawatt South Fork Wind Farm, is now planned as a 138-megawatt installation to be built by the U.S. affiliate of the Danish energy company Orsted and Eversource, based in Connecticut, the companies having partnered on a number of proposed wind farms after Orsted acquired Deepwater Wind in 2018. LIPA approved a power purchase agreement to buy energy from what would be New York's first offshore wind farm in 2017, following its 2015 request for proposals to meet growing energy demand on the South Fork.

The developers assert that the wind farm will generate enough energy to power 70,000 "average" houses.