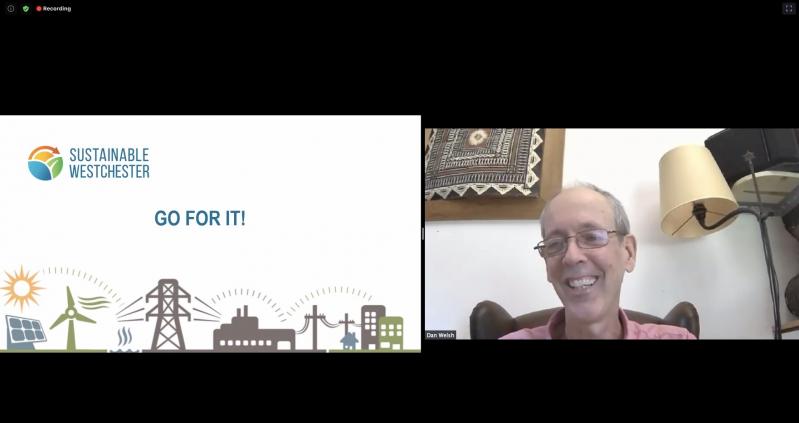 Dan Welsh of Westchester Power told a webinar audience that a community choice aggregation program is serving its participants well.
By Christopher Walsh

East Hampton can take a large step toward deriving its energy needs from renewable sources by joining 61 other municipalities in New York State with an active community choice aggregation program, speakers said during a webinar on the topic on Monday.

Community choice aggregation, or C.C.A., allows a local government to procure electricity and/or natural gas on behalf of its residents, businesses, and municipal accounts from a provider other than the incumbent utility. In a C.C.A. program, a municipality enters into contracts with energy service companies, or ESCOs, for power supply purchase options within its jurisdiction. Options include power produced through 100-percent-renewable sources, power produced through nonrenewable sources, or a blend. Thirty-eight of the 61 municipalities in a C.C.A. program currently receive 100-percent renewable energy as their default supply.

Brad Tito of the New York State Energy Research and Development Authority, Dan Welsh of Westchester Power, the state's first C.C.A., and Justin Bell of the Long Island Power Authority all encouraged the town to continue on a path to adopting enabling legislation and implementing a C.C.A. program in the webinar, which was hosted by Lauren Steinberg of the town's natural resources department and Gordian Raacke of Renewable Energy Long Island.

Westchester Power started as a pilot program in 2015 and was approved in 2016, Mr. Welsh said. Initially, 20 municipalities decided to join; the number is now 27. By choosing renewable energy sources, more than 660,000 metric tons of carbon dioxide has been mitigated to date. This, he said, is equivalent to 142,600 cars taken off the road for one year or planting 10.9 million tree seedlings and growing them for 10 years.

Mr. Welsh described Westchester Power "as a membership-based nonprofit, essentially a shared service" operating as a business. C.C.A., he said, "is a tool, part of launching toward the future," listing current components including the HeatSmart incentive and a financing program for residential and commercial heating and cooling as well as electric vehicle programs and a demand response pilot program launched this summer. Future plans include community solar, which allows utility customers to benefit from solar power without installation on their property.

"We have a very short period of time to almost completely transform how we use energy," Mr. Tito said, referring to Gov. Andrew M. Cuomo's Green New Deal agenda that mandates 70 percent of electricity come from renewable sources by 2030 and 100 percent by 2040. C.C.A.s, he said, "can contribute directly to meeting these renewable energy goals."

Municipalities in a C.C.A. enjoy added choice and more local control, he said. A C.C.A. program will typically lock in a fixed-rate price for energy. While this does not guarantee cost savings, rate stabilization is a benefit, reducing future uncertainty, he said. C.C.A. "can also help communities capture the economic benefits of clean energy more broadly by creating opportunities around solar, electric vehicles, smart thermostats, and batteries," with participants able to access discounted products through bulk purchase.

"East Hampton has been a pioneer on clean energy and sustainability, and we need you now more than ever," Mr. Tito said. "What you do here, other communities will want to replicate. That's how we're going to scale up fast to meet our shared goals."

Long Island is "doing well in meeting our share of the state's goals," Mr. Bell said. In May, LIPA approved a C.C.A. tariff, the terms and conditions specifying how customer data will be exchanged between it and the C.C.A. administrator. "From a utility's point of view," he said, "we like C.C.A. because we like when we have towns like East Hampton that are involved in the clean energy transformation."

But an answer to a question put to Mr. Bell left many participants confused. The question referred to how LIPA's C.C.A. tariff requires ratepayers in a C.C.A. program to pay LIPA the difference between whatever discount an ESCO might offer and PSEG-Long Island's retail rate, even though they are not getting power supply from PSEG, only distribution. (PSEG Long Island manages the grid on behalf of LIPA.)

Mr. Bell said that under LIPA's LI Choice program, which allows customers to buy electricity from an ESCO and through which a C.C.A. would engage with the utility, "ESCOs pay LIPA the monthly cost of power supply minus the market price of the services that are provided by the ESCO instead of by LIPA," Mr. Bell said. "In other words, LIPA forgives the cost of the services that are not provided by LIPA," which he said include the energy itself, ancillary services, and off-Island capacity.  LIPA, he said, estimates those avoidable costs up front and adjusts them upward or downward to the actual market cost, which is known as a bill credit adjustment.

But the portion of those costs that are avoidable and therefore forgiven is much smaller on Long Island than upstate and in Western New York, he said, because those parts of the state have no requirement that they purchase local capacity, whereas the New York Independent System Operator requires load-serving entities on Long Island to purchase most capacity locally. "Historically, the most cost-effective way for LIPA to do so was through long-term bilateral contracts," Mr. Bell said. "As a result, a lot of the capacity here is under contract to LIPA."

"No," said Jessica Stromback, managing director of Joule Assets, Southampton's C.C.A. administrator. "That is in fact a chosen market structure, it has nothing to do with necessity. It's a choice that the government and LIPA have taken together. It's also been abandoned in a lot of markets because of the poor results it often creates. It guarantees the utility payment no matter how they behave or perform."

LIPA, Ms. Stromback said, "will come back to you with 'This was a solution agreed upon by the government to guarantee secure access to supply for Long Island.' At a time when that was an issue, fine. However, this was a regulatory choice, not a necessity. Many markets, and all the best functioning ones, have chosen not to protect multibillion-dollar corporations in this way. The record over [Tropical Storm Isaias] would be a great example of that."

Lynn Arthur, energy chair of Southampton Town's sustainability advisory committee, likened Mr. Bell's answer to a "LIPA surcharge." "If LI Choice, with its unique market structure, is so effective, then why is there no competitive market on Long Island?" she asked. Mr. Bell's answer, she said, "left several people I spoke to asking more questions."

An email to a LIPA spokeswoman seeking clarification had not been answered as of noon yesterday.

That question aside, Mr. Bell and the other speakers were united in calling C.C.A. an effective tool to achieve the town's goal of emission-free electricity, with Mr. Welsh telling viewers that "it's worked tremendously" in Westchester County. "The biggest part of it is creation of a relationship with so many people that you can then build upon," he said. "Our role, your role, is as a community organizer, in a sense — creating relationships with local nonprofits and people. This is a great medium for doing that."