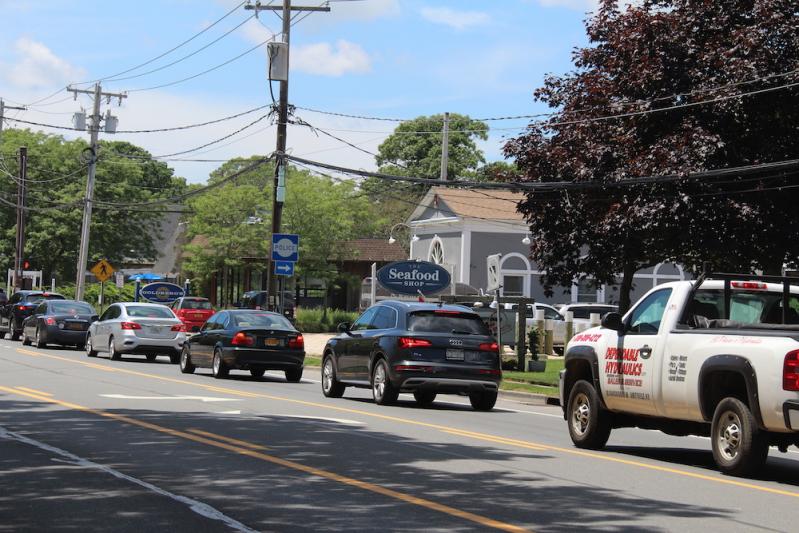 The proposed village would mirror the school district boundaries, which includes not only the bucolic farming area south of Montauk Highway but also the busy Montauk Highway corridor, above, and areas north of the highway all the way to Route 114 just outside of Sag Harbor Village.
Durell Godfrey
By Christine Sampson

The question of whether Wainscott should be carved out of East Hampton Town as its own village has divided residents of the hamlet.

On one side, a group known as Citizens for the Preservation of Wainscott has gathered more than 200 signatures on a petition to draw the line of incorporation, and on the other, a new collective called Wainscott United has begun a campaign of its own in opposition to that idea.

And situated somewhere in between is the Wainscott Citizens Advisory Committee, a group appointed by the East Hampton Town Board to represent the residents' interests and communicate town initiatives. The committee's chairwoman, Carolyn Logan Gluck, said yesterday that it is exploring the concept of incorporation by giving a voice to the residents who support it, and the committee will eventually make a recommendation to the town board one way or another.

"I'm completely neutral at this point in time," Ms. Logan Gluck said, though she acknowledged there are committee members who openly favor incorporation. "I think it's an intriguing question and it really needs to be fully explored to find out if it's the right thing for Wainscott."

According to the Wainscott C.A.C.'s official agenda for this Saturday's online meeting, Donald Louchheim, the mayor of Sagaponack Village, has been invited to speak on the subject of that village's establishment in 2005. Gouri and Alex Edlich, who are leading the push for the incorporation of Wainscott, were the guest speakers at the July 11 meeting of the Wainscott C.A.C.

"We have support from every geographic area, all parts of the hamlet," Ms. Edlich said in a phone interview on Tuesday. She said there are quality-of-life issues at stake, such as airport management, wind power infrastructure, and affordable housing developments. The Citizens for the Preservation of Wainscott "feel that the town hasn't been considering how the local people feel" on these issues.

Incorporation, Ms. Edlich said, would give Wainscott the ability to have "a government and a voice that reflects the people who live here." Their signatures on the petition represent more than 30 percent of the 650 residents of Wainscott, a figure that was tallied in the 2010 census.

Wainscott United's objection to becoming a village is based on the tax implications, according to three members, John Hall, Amy Turner, and Doreen Niggles. They, too, say their side of the debate has support from all over the hamlet.

"We don't necessarily agree that incorporation will give us more benefits, but it will definitely increase our taxes, so that's our main concern," Ms. Niggles said this week.

In 2019, the Wainscott School District taxes were $1,967 per $1,000 of a property's assessed value, the lowest of any school district in East Hampton Town, and town or county taxes are levied on top of that. The proposed village would mirror the school district boundaries and would layer on a village tax. The school district includes not only the bucolic farming area south of Montauk Highway extending to the ocean but also the busy Montauk Highway corridor and areas north of the highway all the way to Route 114 just outside of Sag Harbor Village.

Mr. Edlich told the C.A.C. on July 11 that an anticipated annual budget could be between $250,000 and $300,000. It "does not really begin to lay out either the issues that a village will have to confront or the costs of confronting those issues," Mr. Hall said.

The cost of any municipal litigation is borne by the towns or villages that find themselves embroiled in it, and Wainscott United says that hasn't been taken into account, nor have costs such as police protection, road maintenance, and wintertime snow plowing.

"This is so unnecessary. This is a solution in search of a problem," Ms. Niggles said.

The Citizens for the Preservation of Wainscott feel that the hamlet's residents are not adequately represented on the town board or trustees. Councilman Jeff Bragman is a liaison to the Citizens Advisory Committee, but Ms. Edlich said there are no sitting board members or town trustees who live in Wainscott.

Ms. Logan Gluck said the advisory committee likes the liaison relationship it has with Mr. Bragman. "Jeff has been an absolutely amazing advocate for Wainscott's interests to the town board," she said. "As he says often, 'I'm a vote of one.' So I think that has factored into the way certain situations have played out, but he's been fantastic."

Ms. Edlich said there are a number of financial projections and organizational materials that are still being fine-tuned, and did not make those drafts available to The Star by press time this week. A Freedom of Information request has been submitted by The Star to the East Hampton Town clerk for all documents that were presented in July to the Wainscott Citizens Advisory Committee, which is considered a public entity.

Ms. Edlich did say the group is proposing that an incorporated Wainscott should have a volunteer village board and mayor, and acknowledged there would have to be some paid positions in such a village, perhaps a village administrator and treasurer or clerk.

She declined to state Citizens for the Preservation of Wainscott's positions on hot-button issues such as the airport, affordable housing, and the proposed offshore wind farm cable landing on Beach Lane.

Wainscott United's representatives say their own group is staying neutral on those matters, focusing strictly on tax implications and unintended consequences. "If an incorporation goes through, it will really pit north of the highway against south of the highway, summer versus year round," Ms. Turner said. "Our group wants to not add to the divisiveness that is rampant in the rest of the country. Wainscott has been united in a unique culture for over 300 years, and incorporation will be the end of that."