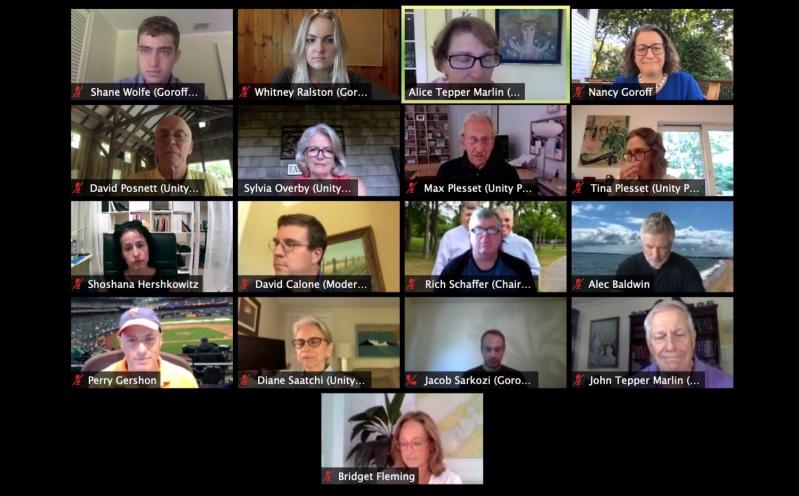 The video conference drew more than 550 participants, according to Nancy Goroff's campaign staff.
By Christopher Walsh

Nancy Goroff, the Democratic Party's nominee to challenge Representative Lee Zeldin in New York's First Congressional District, was the focus of an online "unity party" on Saturday that included her two leading competitors for the nomination and the actor Alec Baldwin.

In the midst of the coronavirus pandemic, Ms. Goroff is betting that a scientist -- she is on leave from her position as chairwoman of Stony Brook University's chemistry department -- presents an attractive alternative to Mr. Zeldin, who is one of President Trump's most stalwart defenders in Congress. She would be the first female Ph.D. scientist elected to Congress.

"I got into this race last summer because I know that we deserve so much better than Lee Zeldin," the nominee said. "We deserve to live in a world where the government is actually trying to make people's lives better and basing policy on facts and reality. . . . The president and Lee Zeldin have their priorities so upside down and backward that they're hurting people."

Others speaking during Saturday's event emphasized that theme, repeatedly portraying Mr. Zeldin, who is seeking a fourth term, as abdicating responsibility to his constituents in favor of unquestioning fealty to the president. The incumbent, Mr. Baldwin said, "has rubber-stamped someone who has betrayed the middle class, and the First District is a middle-class district, a district of hard-working, taxpaying, sometimes red, sometimes blue, sometimes purple voters. . . . This is a great opportunity for us to appeal to those people."

Mr. Baldwin, who in recent years may be best known for his impersonation of the president on "Saturday Night Live," said that Democrats have an opportunity to preserve or build on their majority in the House of Representatives while taking both the White House and the Senate, where Republicans hold a slim majority. He spoke of "the long and very, very difficult work of undoing all the damage that's been done to this country in a very short time. It's almost inconceivable where we were in November 2016 and where we are now . . . how low this country has been laid by this man and by his minions. We have a chance here to hold them accountable, to hold Lee Zeldin accountable, and to have Nancy join the class of 2020 down in Washington."

Mr. Gershon, who lives in East Hampton, advised the nominee to "get out in front of Lee Zeldin as soon as possible, before he has defined the turf on his own terms." Because the incumbent "has a record to hide from," he said, "he's busy laying obstacles" to a clear-eyed examination of that record. "Like Trump, he needs a devil to run against," hence his criticisms of New York City Mayor Bill de Blasio, Representative Alexandria Ocasio-Cortez, and former Vice President Joe Biden, President Trump's presumptive opponent in the Nov. 3 election.

Ms. Fleming said that the incumbent "has ignored his constituents for too long" and has "sold out completely" to the president at the expense of the district and the country. "Lee Zeldin has a constituency of one, and he lives on Pennsylvania Avenue."

Mr. Zeldin will be on the same ballot as the president, Mr. Gershon noted, "running in the midst of a pandemic with record job losses and ongoing health threats. He has sold out the people he represents."

Ms. Goroff and others ticked off the ways in which they believe Mr. Zeldin has abandoned his constituents, among them his support for repeal of the Affordable Care Act, "which would cost 71,000 people in this district health insurance," she said, and his opposition to repeal of the $10,000 cap in state and local taxes that can be deducted on federal income tax returns, part of the Republican-led 2017 tax overhaul. "We need to have tax relief for the people of this district," she said. "The fact that Zeldin has voted against removing the cap shows he does not care about the people of this district. It's the only tax cut he's against." On issue after issue, she said, "Lee Zeldin has ignored the evidence and chosen political expedience over the needs of families in our district."

Despite the president's assertions to the contrary, polls indicate that a large majority of Americans believe his handling of the pandemic has been incompetent and ineffective. "At the heart of all this chaos and negligence," Ms. Goroff said, "has been the shaming of expertise and sidelining of experts."

She pledged to be "the climate hawk that we deserve" in Congress. "I plan to go to Washington and make sure that my office is a resource for all members of Congress, Republican and Democratic." Congress would have access to experts on all environmental issues, she said, and she would "hold their feet to the fire" to ensure meaningful action on climate change and other environmental issues.