By Monday in CD-1, absentee votes outnumbered in-person more than 2-1 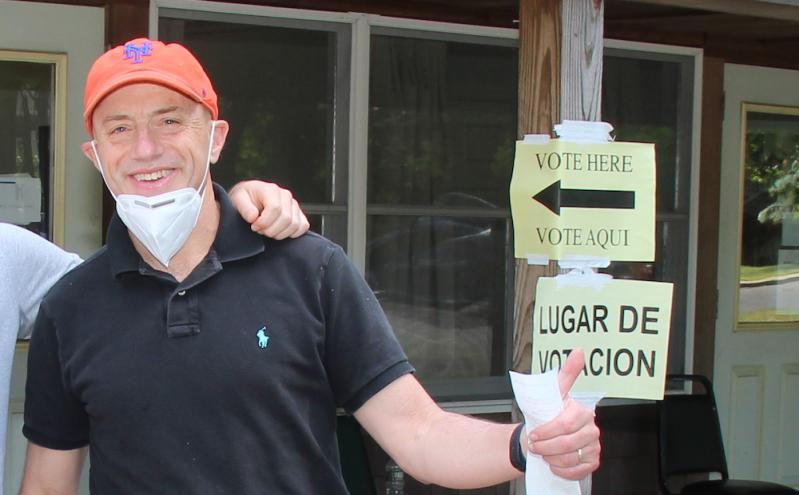 Perry Gershon, the front runner in the race for the Democratic nomination for the First Congressional District, after voting early in East Hampton last month.
Durell Godfrey
By Christopher Walsh

Suffolk County voters must wait "at least a couple of weeks" before winners of the June 23 primary elections will be announced, the Suffolk County Board of Elections' Democratic commissioner said on Tuesday.
Anita Katz stressed that no statistics cited by the board of elections should be considered definitive at this juncture, and that nothing had changed since the count of in-person votes last week. "It could be two weeks, it could be four weeks," she said. "Nobody knows."

In New York's First Congressional District, an unofficial count of votes cast in person on June 23 or during the early voting period has Perry Gershon, the Democrats' 2018 nominee leading the four-person primary race with 5,166 votes. He lost his previous bid to unseat Representative Lee Zeldin by 4 percentage points.

Nancy Goroff, on leave from her position as chairwoman of Stony Brook University's chemistry department, was close behind Mr. Gershon with 5,002 votes. County Legislator Bridget Fleming was in third place, with 4,062 votes. A fourth candidate, Gregory-John Fischer, had 322 votes. As of Monday, the Board of Elections told the CD-1 candidates, 36,419 absentee ballots had been received from the district. In the end, that figure could be higher.

In the race to challenge Assemblyman Anthony Palumbo in the State's First Senatorial District, Laura Ahearn leads four challengers in the unofficial count of in-person votes with 2,360. The winner and Mr. Palumbo will face off in the general election to succeed State Senator Kenneth B. LaValle, who is retiring.

Counting of around 80,000 absentee ballots countywide that were postmarked no later than June 23 was to begin yesterday. As of Monday, that figure included approximately 70,700 cast in Democratic primaries and around 8,200 cast in the Republican Party's primary in the Second Congressional District, which straddles southwestern Suffolk and a small portion of southeastern Nassau County. Two Republican and two Democratic candidates are vying for their party's nomination in that district, where Representative Peter King is retiring after 14 terms.

The Republican primary election in the Third Congressional District, which extends from northwestern Suffolk across northern Nassau and into northeastern Queens, was canceled. In that district's Democratic primary, Representative Tom Suozzi, the incumbent, has a sizable lead over two challengers in votes cast in person.

"I feel good about the outcome of the election and I am confident that after everything is counted, because I garnered votes from every corner of the district, my lead will stand," Mr. Gershon said in a text message on Tuesday. "What that tells me is that I am the strongest candidate to defeat Lee Zeldin in November."

"What last week's record turnout shows is the energy and excitement that Democrats have going into November," Ms. Goroff said yesterday. "While I'm confident that after all the primary votes are counted, I will be the Democratic nominee, I'm even more confident that regardless, voters in November will vote out Lee Zeldin, who has ignored facts and science throughout his career."

Ms. Fleming said in an email on Tuesday that "We are watching the count closely to make sure every vote is counted and we are cautiously optimistic. The margin among all candidates is a small fraction of the ballots left to count. We're confident that my message has resonated with voters across the district who want to elect a candidate with a proven record of service to the district who will prosecute the case against Lee Zeldin."

Both Mr. Gershon and Ms. Fleming were harshly critical of the incumbent, a staunch supporter of President Trump who is seeking a fourth term. Mr. Gershon referred to recent reports that Mr. Trump has known for months that a Russian military intelligence unit offered bounties to Taliban-linked militants for killing American and other coalition soldiers in Afghanistan, and done nothing.

"That Zeldin has yet to stand up for our troops -- saying nothing against Russia for offering a bounty to assassinate U.S. soldiers -- is a perfect example of why he has to go," he wrote. "I'm the guy who will fight for what's right in Congress, not stay silent until I get my talking points from the White House."

"Voters across Suffolk County are sick and tired of a congressman who cares more about the president's adoration than he does about their real life priorities," Ms. Fleming said. "And they deserve more. That's why I entered this race and it's the message I'll bring to voters in the fall."