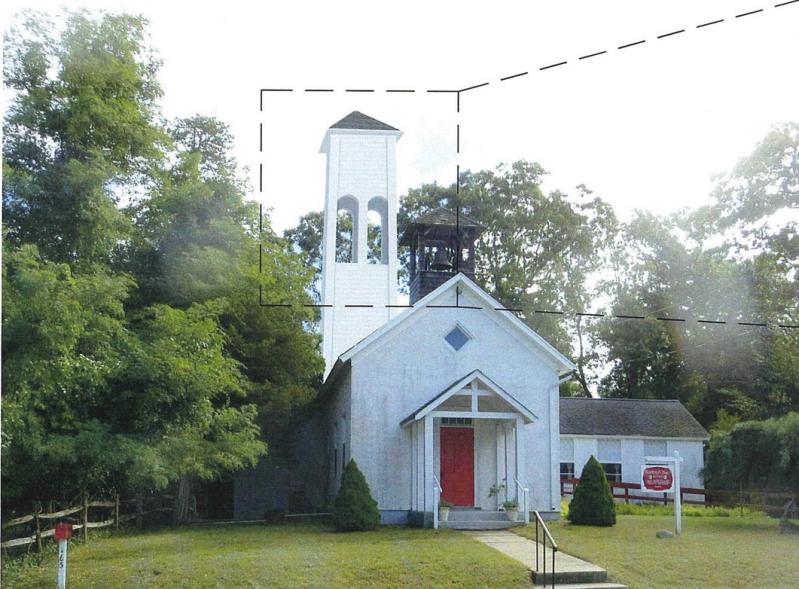 A rendering submitted to the East Hampton Town Planning Board by AT&T shows the taller bell tower that had been proposed on St. Peter's Chapel to house cellphone antennas.
By Jamie Bufalino

AT&T will not be permitted to build a freestanding, 50-foot-high bell tower to house cellphone antennas at St. Peter's Chapel in Springs, the East Hampton Town Planning Board made clear at a meeting on July 8.

The company had been seeking site plan approval and a special permit to build the "campanile" at the Old Stone Highway chapel, but a majority of board members said it would be wildly out of character with the neighborhood.

"This would be as incongruous as dropping a cedar-sided saltbox in the middle of the Piazza San Marco," said Samuel Kramer, the chairman, who described Old Stone Highway as "the historical and emotional heart of this town."

At a June 6 public hearing on the proposal, several neighbors of the chapel had voiced their opposition to the structure, and board members cited the universally negative reaction as a factor in their decision-making. "This application has gotten more attention from the public than any other single application that we've had, certainly than any other personal wireless facility," Mr. Kramer said.

Ian Calder-Piedmonte, who intends to abstain from voting, said he was not in favor of the proposal but thought the board should work with AT&T to come up with a suitable plan to remedy the area's gap in cell service. "I'm uncomfortable just saying no, without opening the door for something else here," he said.

The board will issue a resolution on the application at a July 22 meeting.